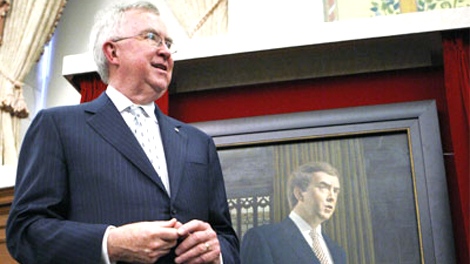 Former prime minister Joe Clark stands beside his official portrait following its unveiling on Parliament Hill in Ottawa on Tuesday May 27, 2008. (Sean Kilpatrick / THE CANADIAN PRESS)

OTTAWA -- Former prime minister and foreign minister Joe Clark faces a tough slog during his travels to the Persian Gulf and Africa to campaign for Canada's bid for the United Nations Security Council, analysts said Monday.

Clark began a one-week trip Monday as "special envoy" to Algeria, Bahrain, Qatar and Egypt to campaign for Canada's bid for a temporary two-year seat on the UN's most powerful body.

Bessma Momani, an expert in Middle East affairs at the University of Waterloo, says Clark may not get a very receptive audience to Canada's push for women's rights among some of the government representatives he will be meeting.

"The people certainly hold Canada in high regard, regardless of what the governments may think," Momani said. "People are still queuing to immigrate here so clearly we are still doing something right."

"Certainly our recent emphasis on human rights and women's rights is probably not received that favourably in that part of the world, which tends to have more conservative values and are part of the global autocratic turn."

Prime Minister Justin Trudeau visited Ethiopia and Senegal in February as part of his government's campaign for the council seat. Several cabinet ministers have also been visiting countries across Africa in recent months.

The secret ballot at the UN General Assembly takes place in June for a two-year term starting next year.

Africa, with its 54 voting countries, is a key voting bloc in the tough fight that pits Canada against Norway and Ireland for two available seats. Both countries spend more per capita than Canada on foreign aid, which is seen by many analysts as an impediment to Canada's chances to winning the competition.

Clark is an appropriate choice to campaign in the region, but he will have his work cut out for him, said Fen Hampson, a Carleton University expert who wrote a recent book on the foreign policy of the ex-prime minister Brian Mulroney. Clark served as Mulroney's minister of external affairs.

"African leaders with long memories will recall the important role Joe Clark and Brian Mulroney played in the Commonwealth in helping to bring an end to apartheid in South Africa and also stepping up to the plate in the Ethiopian famine crisis," said Hampson.

"We also opened our wallets with generous development assistance in those years. Unfortunately, Canada's more recent engagement in the region under successive governments suffers in comparison with our role in the 1980s and 1990s and that is the nub of the problem and our challenge in getting Africans to vote for us."

It was during the Mulroney era that Canada invented the practice of using so-called "special envoys" to campaign for the country when it won a seat on the council in 1988, said Adam Chapnick, the Royal Military College professor and author of the new book 'Canada on the United Nations Security Council: A Small Power on a Large Stage.'

"You typically don't send special envoys halfway around the world unless you believe that there is a reasonable chance of getting a yes vote and you don't expect normal campaigning strategies to be sufficient to close the deal," said Chapnick.

"Typically, when it comes to UNSC campaigns, we do better in the Gulf and the Middle East writ large than people might suspect."

This report by The Canadian Press was first published on March 2, 2020.