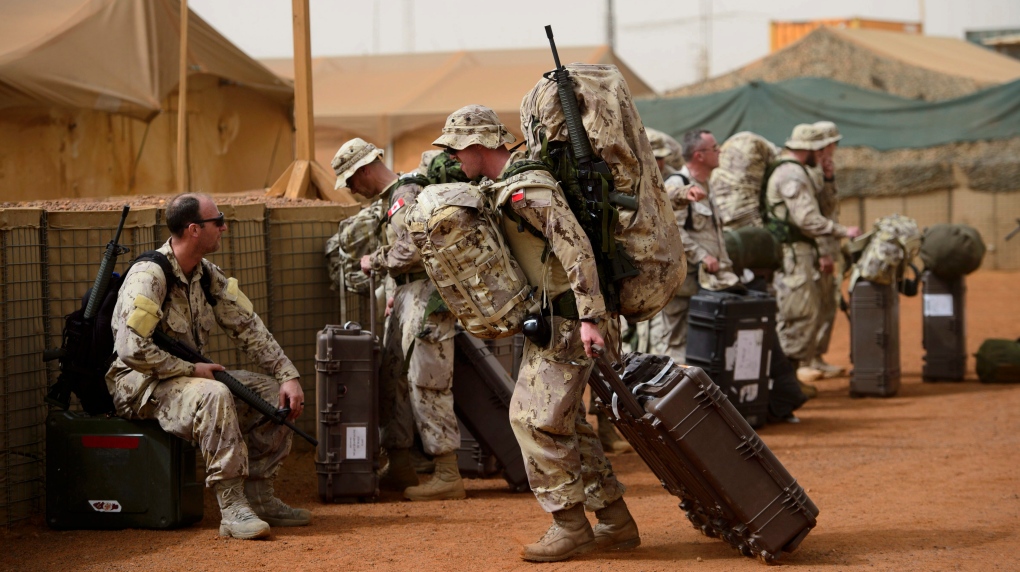 Canadian troops arrive to a UN base in Gao, Mali, on Monday, June 25, 2018. (THE CANADIAN PRESS/Sean Kilpatrick)

OTTAWA -- As Canada's military mission races to leave Mali and the United Nations pleads for it to stay, the European Union is making a fresh appeal to the Canadian Forces to partner with it in the West African country.

Gen. Esa Pulkkinen, director general of the EU's military staff, told The Canadian Press that he has asked the Canadian government to bring its military training expertise to Mali as part of a broader effort to stamp out Islamic extremism in Africa's Sahel region.

Pulkkinen said he's aware of the context of his request -- it comes as Canada faces pressure from the UN to extend its Mali peacekeeping mission in order to bridge a gap until Romanian replacements can arrive.

But he says Canada would make a great bilateral partner with the EU's military training efforts in West Africa, which he says are crucial to stamping out security threats to Europe.

Those threats include the mass northward migration to Europe, an increase in the smuggling of arms, drugs and human trafficking, as well as terrorism.

Pulkkinen was in Ottawa this past week, and said he was planning to make a formal request to Canadian officials after raising the matter informally.

"I need brains. I don't need the quantities," he said.

"Your officer training is top level in the world. More importantly, you have French language skills as well, which we need when we provide advice for our Malian friends."

Pulkkinen already commands 1,000 troops in Somalia, the Central African Republic and Mali, and is partnering with the United States on various missions on the continent. He said the EU wants to ramp up its presence in Mauritania, Burkina Faso, Niger and Chad as well.

Joining forces with Canada would be a natural fit, he noted, because the EU mission is predicated on the same shared values.

"We try to find other partners that share the same universal Western values as we have. They are very important when you provide education for our African troops," Pulkkinen said.

"The same understanding of the respect of human rights and other issues -- you name it."

But the mission will be a tough sell for the EU.

Canada is in the final throes of withdrawing its eight helicopters and 250 military personnel from Mali, where they have been providing emergency medical evacuations and transporting troops and equipment across the vast country.

The drawdown has moved the UN to formally ask Canada to extend its mission in what appears to be a final effort to prevent a gap in military medical evacuations for wounded peacekeepers and UN staff.

The UN sent a formal request, in writing, to the federal government late last month after months of behind-the-scenes prodding got them nowhere with Ottawa.

The letter marks an unusual step: the UN usually only makes such requests if it believes it stands a good chance of a positive response, which in this case is far from certain.

The government, including Prime Minister Justin Trudeau, has repeatedly played down the gap it would be creating by leaving Mali on schedule.

Pulkkinen's request on behalf of the EU will only increase the pressure on the Trudeau government, which has faced criticism for what has been seen as a relatively weak return to the business of UN peacekeeping due to the Mali mission's modest scope. The Liberals made peacekeeping a signature foreign policy promise during the 2015 federal election.

Canada will face pressure this coming week when the UN hosts a major peacekeeping summit in New York, the first one since Vancouver hosted a similar gathering in November 2017.

Foreign Affairs Minister Chrystia Freeland is expected to attend next week's peacekeeping summit in New York, but her office did not immediately respond to requests for comment.