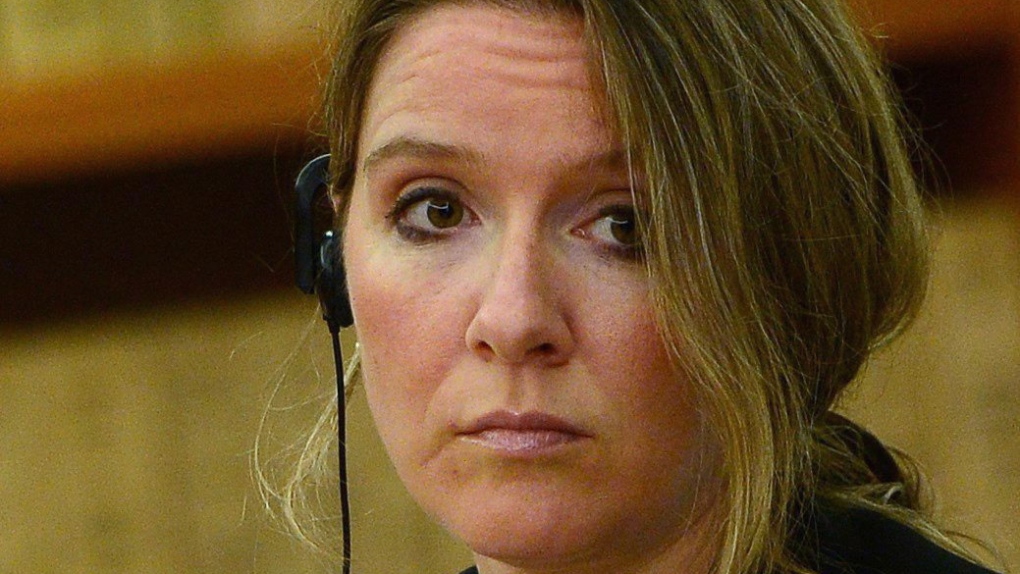 Katie Telford, chief of staff to Prime Minister Justin Trudeau, takes part in a meeting with Chinese Premier Li Keqiang (not pictured) in the cabinet room on Parliament Hill in Ottawa on Thursday, Sept. 22, 2016. (THE CANADIAN PRESS/Sean Kilpatrick)

Ethics commissioner Mario Dion says the allegations are "speculative" and do not provide "a factual basis to support the belief that a contravention" of the Conflict of Interest Act may have occurred.

Consequently, Dion says he's informed Conservative MPs Pierre Poilievre and Michael Barrett that their request for an investigation does not meet the requirements of the act.

His conclusion was relayed in a Sept. 15 letter, obtained by The Canadian Press, to Trudeau's chief of staff, Katie Telford.

The Conservatives' allegations revolved around a report that Telford's husband, Rob Silver, had lobbied aides in the Prime Minister's Office and the finance minister's office to change the rules for the federal emergency wage subsidy program so that mortgage finance company MCAP would be eligible.

Silver is a senior vice-president with MCAP, a post he has held since January.

Telford has set up an ethics screen to prevent her involvement in any decision related to MCAP, even though Dion's office had advised her it wasn't necessary.

But in their letter to Dion requesting an investigation, Poilievre and Barrett alleged an elaborate scheme to benefit Silver and, by extension, Telford.

They included a graphic of a so-called "silver triangle," detailing what they referred to as a "trinity of interests" between Telford, Silver and Mike McNair, a former policy adviser in the PMO who had returned in a voluntary capacity to help out during the COVID-19 pandemic.

McNair is now back full-time at the PMO.

The Conservative MPs alleged that Silver contacted McNair about the wage subsidy program changes he wanted and that McNair told him to speak to aides in then-finance minister Bill Morneau's office, with whom Silver had already been in contact.

They alleged that McNair hoped to regain full-time employment at the PMO by helping Telford's husband, "recognizing that reports of his co-operation and helpfulness could pass from Mr. Silver to Ms. Telford," who would decide whether to re-hire McNair.

"Ms. Telford actually appears to have placed Mr. McNair in an impossible situation: see that Mr. Silver's interests were looked after or jeopardize his own chances of being re-employed," the MPs alleged.

They argued that it is "stunning" to suggest that Telford was unaware that her husband was "burning up the phone lines, pressing her subordinates" about the wage subsidy program. They therefore concluded that she failed to recuse herself both from the issue and from the decision to re-hire McNair, in contravention of the Conflict of Interest Act.

In the end, the eligibility rules for the wage subsidy program were not changed but Poilievre and Barrett suggested that may have been a "bait and switch" gambit. They suggested that MCAP was rewarded instead by receiving an $84-million contract from the Canada Mortgage and Housing Corp. to administer the emergency commercial rent relief program -- and questioned what role McNair may have played in that decision.

The Crown corporation has said it made that decision independently.

In his letter to Telford, Dion, who has not been shy about castigating Trudeau and his ministers for ethics violations in the past, concludes there is no factual evidence to support the Conservatives' allegations.

The PMO said Wednesday that McNair, whom the Conservatives had also accused of conflict of interest, received a similar letter from Dion.

While the ethics commissioner has dismissed the matter, the office of federal lobbying commissioner Nancy Belanger has said it is conducting a "preliminary assessment" of Silver's efforts to change the wage subsidy eligibility rules.

Silver is not currently registered as a lobbyist.