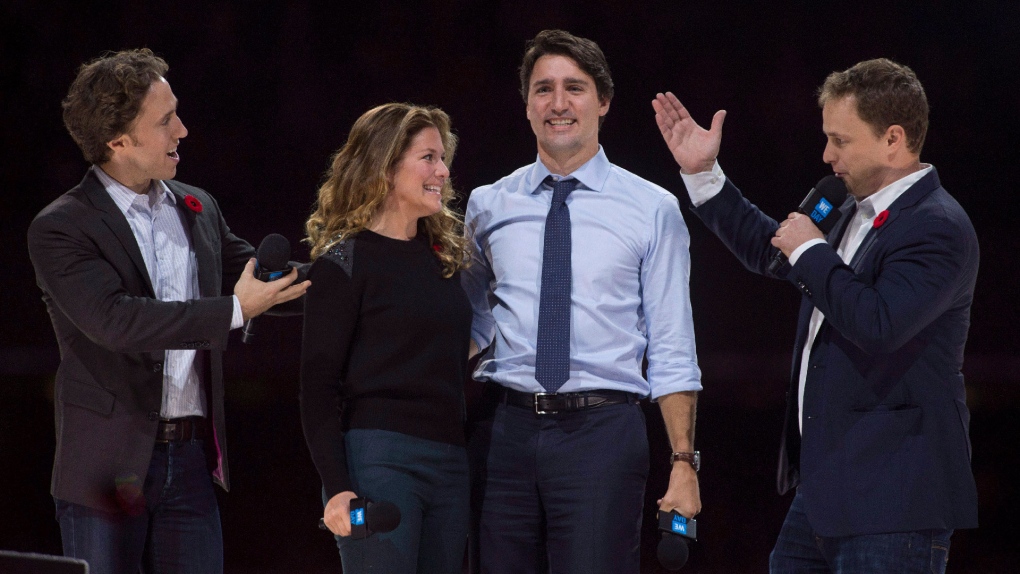 Co-founders Craig (left) and Marc Kielburger introduce Prime Minister Justin Trudeau and his wife Sophie Gregoire-Trudeau as they appear at the WE Day celebrations in Ottawa on November 10, 2015. THE CANADIAN PRESS/Adrian Wyld

OTTAWA -- The House of Commons ethics committee has voted against a motion to obtain all records related to Prime Minister Justin Trudeau and his wife Sophie Gregoire Trudeau’s speaking engagements since Oct. 14, 2008, when the prime minister became an elected official.

The Conservative-backed motion, introduced by MP Michael Barrett, would have required Speakers’ Spotlight, the agency that coordinated speaking opportunities between Trudeau and his family and WE Charity, to hand over all materials showing "an indication of the fee provided, any expenses that were reimbursed and the name of the company, organization, person or entity booking it."

An earlier iteration of the motion introduced in July was passed with the support of the Conservatives, NDP, and Bloc Quebecois members, but the documents were never provided to committee due to the prorogation of Parliament.

Four Liberal MPs and one Bloc Quebecois MP on the ethics committee voted against the new motion on Monday, overruling the three Conservative MPs and one NDP MP that voted in favour of it.

The motion was amended a number of times, first to remove the prime minister’s brother and mother from the list, then to provide more time for the organization to retrieve the documents, and finally to ensure the documents were kept private once released.

Bloc Quebecois House Leader Alain Therrien later said in French that Vignola cast her vote against the motion due to a "translation problem."

"It would be ridiculous to suggest that at the last minute, just as the vote was about to happen, that Mme. Gaudreau got up, walked out, and someone walked in who didn’t know what this vote was about," said Angus in an interview with CTVNews.ca

Barrett said the Liberals have spent weeks "stonewalling" the committee’s work to get to the bottom of the WE Charity investigation and other ethics-related controversies.

"It’s clear that Liberal MPs will do everything they can to hide the arrogance and entitlement of this Prime Minister. Conservatives promised Canadians that we would get answers on the WE scandal. We will keep this promise," he said in a statement to CTVNews.ca

This comes after last week’s confidence vote on a Conservative motion to create a special committee to investigate alleged Liberal corruption, including the contract with WE Charity to administer the now defunct Canada Student Service Grant.

The opposition day motion was defeated with the support of the Liberals, NDP, Green Party, and Independents.

With a file from The Canadian Press