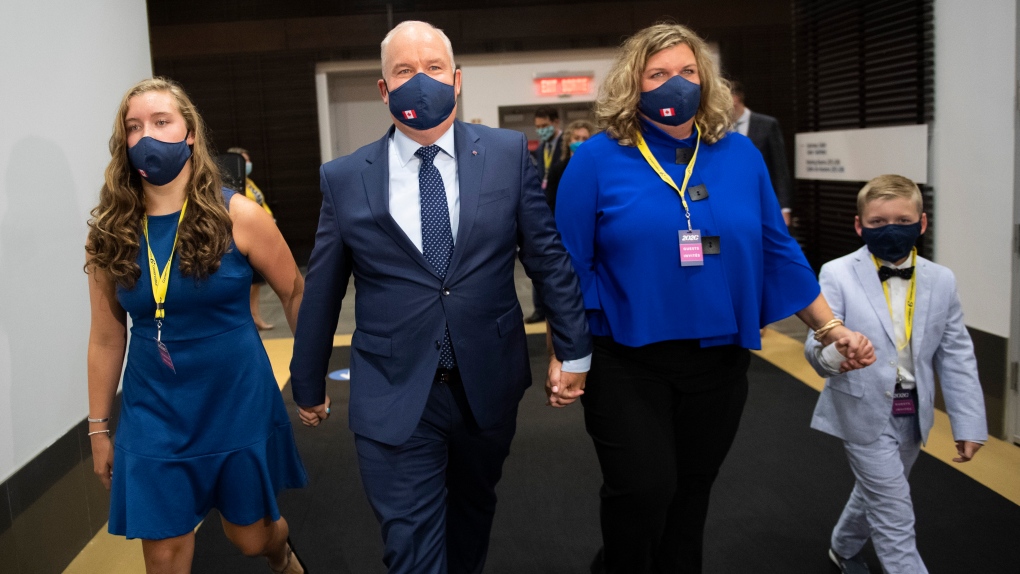 Erin O'Toole walks with his wife Rebecca, second right, daughter Mollie and son Jack, right, after being announced as the new leader of the Conservative Party of Canada, in Ottawa, on Monday, Aug. 24, 2020. THE CANADIAN PRESS/Justin Tang

The family was tested on Thursday after news that one of his staff had tested positive. They were turned away from an at-capacity Ottawa facility before travelling across the provincial border to Gatineau, Que.

While Ms. O’Toole’s first test was negative, after she started exhibiting symptoms her second test on Sunday was positive.

They are monitoring their children Mollie and Jack for symptoms.

O’Toole has called on the Liberal government to address the long wait times at the backlogged assessment centres, where people are reporting hours-long, sometimes day-long waits.

He has been criticized though for taking advantage of the private clinic accessible only to members of Parliament. His family also used this service.

In an interview on CTV’s Power Play on Tuesday, Conservative MP and health critic Michelle Rempel Garner said any backlash is just opposition "trying to make hay" out of the situation.

"We support a strong publicly funded health care system and one that is equal for all but right now it’s not working," she said. "The responsible thing to do was to get the results, come out and have a solution moving forward."

NDP MP and party whip Rachel Blaney has instructed her party not to use the private option.

"If it’s not good enough for Erin O’Toole, we might as well see more investment from the federal government to make it right for everyone else."