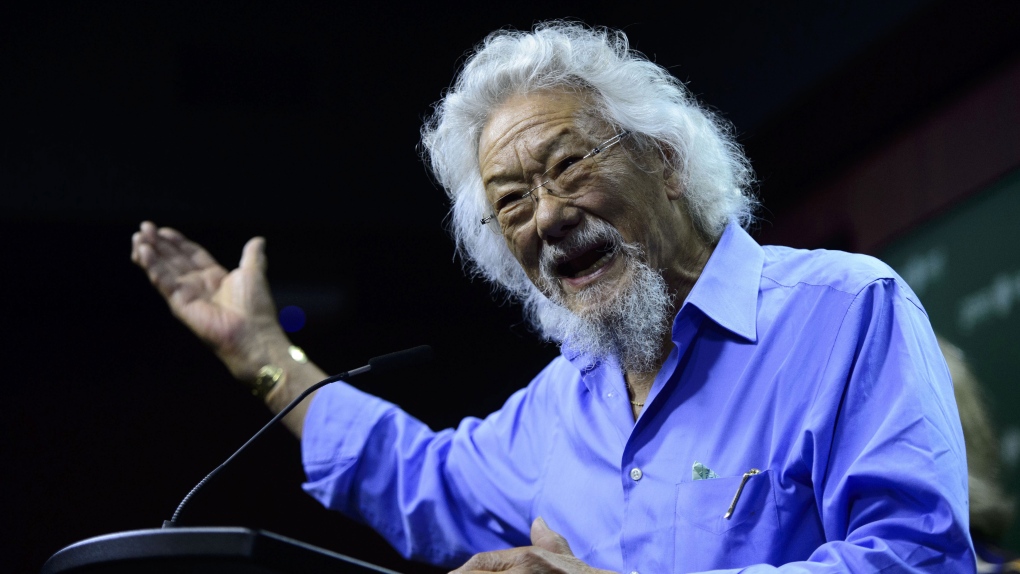 OTTAWA -- Two leading Canadian activists say voters need to think about climate change as if we are a country at war against greenhouse-gas emissions.

"There's never been a moment quite like this in human history," said Stephen Lewis, a former Ontario NDP leader, who chaired a 1988 international conference on climate change on the initiative of then prime minister Brian Mulroney.

He said similar scientific conclusions were drawn then as from more recent climate science, but three decades of little action have put humanity in a much more worrying position.

"We really have to motivate people to get involved and here we have an election coming when climate can be made the major issue," he said.

Lewis is a former ambassador of Canada to the United Nations, deputy director of UNICEF, and campaigner on HIV and AIDS in Africa. He and longtime environmentalist David Suzuki are joining to run a series of campaign-period talks aimed at encouraging young people to stand up and make this election entirely about saving the planet from what Lewis calls "self-immolation." Although both have been directly or indirectly affiliated with left-of-centre political movements in the past neither wants to be drawn into the question of whom to vote for this time.

"It becomes an issue that is no longer a partisan issue of whether the right or left have the right policy," said Suzuki. "It's now something we have to embrace as a nation. We have to address it as if it's war."

But for many environment leaders, deciding where to plant their support this fall is major conundrum. Neither of the two leading parties has plans that would even hit Canada's relatively timid emissions-reductions targets.

"For many progressives I think it's a very hard election in Canada this year, quite frankly," said Tzeporah Berman, international program director for Stand.Earth.

"The idea of a Conservative government that doesn't take climate change seriously, that is very scary at this moment in history. But at the same time the Liberal government's current plan to allow oil and gas production to increase and in fact to even facilitate that by buying the Trans Mountain pipeline and approving LNG Canada, is an incredible lack of ambition.

"I worry it is going to have a significant impact on once again splitting the progressive vote."

The Conservatives' climate-change plan, released last spring, was widely panned by environmental experts, who noted it had no specific targets for cutting emissions and would cancel two of the biggest programs that could cut emissions -- namely the federal carbon tax and a standard to force cleaner-burning fuels.

The Liberals haven't released a new plan for the campaign -- it could come later this week -- but their current policies leave Canada only about halfway to emissions-reductions targets specified in the Paris Agreement, which international scientists say are already not enough.

Suzuki and Lewis say that in 2015, when Prime Minister Justin Trudeau signed Canada on to the Paris accord and promised to take actions to help keep the world to within 1.5 C to 2 C of warming compared to pre-industrial temperatures, it felt like Canada was about to start moving on something it had been promising for decades.

"We all thought this is it, he seized the challenge," said Suzuki. "But then he bought a pipeline."

The Trudeau government bought the Trans Mountain pipeline in 2018 for $4.5 billion. The controversial project would twin the pipeline built and carry more Alberta oil products to the British Columbia coast, and private-sector investors were increasingly spooked by regulatory hurdles. Trudeau's argument is that Canada needs to use revenues from developing its resources in order to fund the transition to a cleaner, greener economy.

Green Leader Elizabeth May is the only party leader who got the GreenPAC nod, but Environment Minister Catherine McKenna did get its seal of approval.

The NDP and Green party are each hoping to capitalize on the disappointment many environmentalists have in the Liberal government. Conservatives believe the Liberals are making a mistake in making climate change the ballot-box question because polls suggest Trudeau is not the leader Canadians think is best to solve it.

The Liberals for their part are hoping to become the consensus party for climate-change voters. Their recent recruitment of Quebec environment leader Steven Guilbeault helps their push. The Liberals also have a number of former environment-group staffers working in ministers' offices.

While the environment is a bigger issue for voters than it has ever been before heading into the campaign, Suzuki said voters often get distracted by other things as a campaign goes on, and he is hoping to find a way to keep it front and centre.