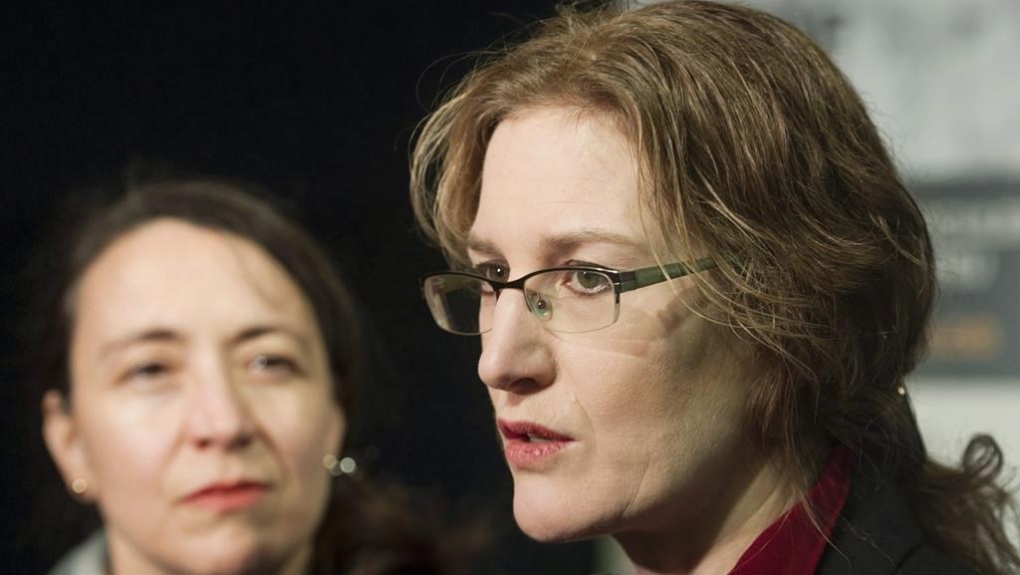 OTTAWA -- A leading voice for stricter gun control is calling on the Liberal government to place an immediate moratorium on new sales of assault-style firearms as well as a permanent ban on the importation and manufacture of handguns.

PolySeSouvient includes students and graduates of Montreal's Ecole Polytechnique, where 14 women were gunned down 30 years ago next month.

The letter was signed by PolySeSouvient co-ordinator and engineering school graduate Heidi Rathjen and group spokeswoman Nathalie Provost, who was wounded in the 1989 shooting.

It was sent on behalf of several relatives of victims of the Polytechnique massacre and a deadly 2006 shooting at Montreal's Dawson College, the father of slain police officer Thierry LeRoux and the president of the Quebec City mosque where six people were fatally shot in 2017.

Scott Bardsley, a spokesman for Blair, said the minister received the letter, looks forward to reviewing it and appreciates the group's support of the government's promise to ban military-style assault rifles.

The newly re-elected Liberals campaigned on a commitment to outlaw such firearms, including the popular AR-15, saying guns designed to inflict mass human casualties have no place in Canada.

They said owners of legally purchased firearms that fall under the ban would be offered fair-market prices through a buyback program.

PolySeSouvient applauds these pledges and says it particularly looks forward to a ban on the Ruger Mini-14, used in the 1989 shooting.

"An immediate moratorium on new sales of assault weapons would be entirely consistent with your party's election promise," the letter said. "Why allow the continued sale of weapons which are to be banned and bought-back in the near future?"

The group pointed to the rush earlier this year to buy AR-15s following a rumour the firearm would be outlawed.

There is no clear definition of assault- or military-style firearms in Canada. PolySeSouvient supports following the model recently adopted by New Zealand, which essentially banned semi-automatic firearms with some exceptions.

Under PolySeSouvient's proposal, some semi-automatic rifles, such as .22-calibre rimfire rifles used by hunters, would still be legal.

However, the group wants magazines limited to five cartridges, as opposed to the general New Zealand cap of 10.

Some 900,000 handguns are registered to individuals in Canada, most of them sport shooters or collectors.

Many handguns and other firearms used in gun violence are stolen from law-abiding individuals or businesses, or purchased legally and then diverted to the illicit market, the government says.

The Liberals made a campaign promise to work with provinces and territories to give municipalities the ability to further restrict or ban handguns.

The government plans to empower cities and provinces to enact additional requirements to control the storage and use of handguns within their jurisdictions, given that they have different needs and concerns.

PolySeSouvient is pushing for a national handgun ban, arguing local ones are generally ineffective, as the "disastrous patchwork of local and state laws" in the United States demonstrates.

"In addition, local bans would have to overcome enormous obstacles including provincial governments ideologically opposed to gun control and an array of legal and jurisdictional complexities, in addition to long and acrimonious political battles against an increasingly powerful gun lobby," the letter said.

The association has also warned that if the government goes a step further than New Zealand, then hunting, trap and skeet shooting, as well as target-shooting sports, with the possible exception of those involving handguns, "will be on death's door."

PolySeSouvient says its proposed immediate ban on importation and manufacture of handguns in Canada is intended to stop the steady increase in their numbers.

If restricted firearms like handguns remain legal under the Liberal plan, the group would urge the government to require they remain at gun clubs in secure storage facilities. PolySeSouvient also suggests a look at banning online sales of restricted firearms along with kits, components and blueprints for producing homemade weapons.