When the election was called in August, there was some concern voters would tune out over the course of the longest campaign in Canadian history. But if social media activity is any indication, Canadians may have been more engaged than ever.

"That's a huge amount of conversation on Facebook," he said.

To coincide with election day, Facebook is also launching its "voter megaphone," a program aimed at reminding Canadians they can vote today, and directing them to the Elections Canada website for more information.

"What we want to do is make sure that when Canadians log into Facebook today, on their newsfeeds, they will see that their family and friends are all sharing this, and all intending to vote," Chan said. "And hopefully it will be a reminder to get out and vote today."

Twitter Canada's director of media partnerships, Christopher Doyle, said the conversation surrounding the election shifted during the course of the campaign.

During the first week of the election (Aug. 2-8), the top five issues that dominated the discussion on Twitter were the economy, change, taxes, oil and pipelines, and veterans and the military.

By comparison, the top five issues that dominated the election discussion on Twitter during the week of Oct. 4-10, were the Trans-Pacific Partnership, niqabs, change, the economy, and immigration and refugees. 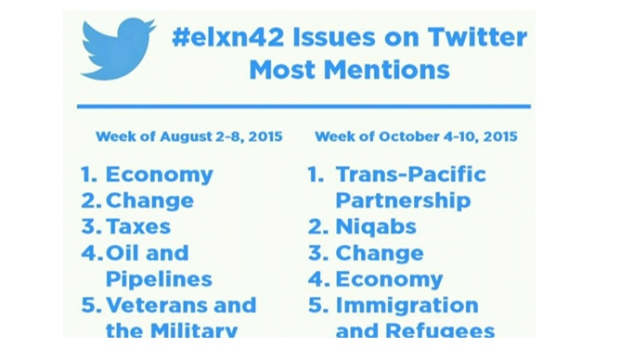 Liberal Leader Justin Trudeau had the largest proportion of mentions by Twitter handle, with 36 per cent of the tweets including the Liberal leader’s handle, Doyle said. Following Trudeau is NDP Leader Thomas Mulcair (28 per cent), Conservative Leader Stephen Harper (25 per cent), Green Party Leader Elizabeth May (8 per cent) and Bloc Quebecois Leader Gilles Duceppe (3 per cent). 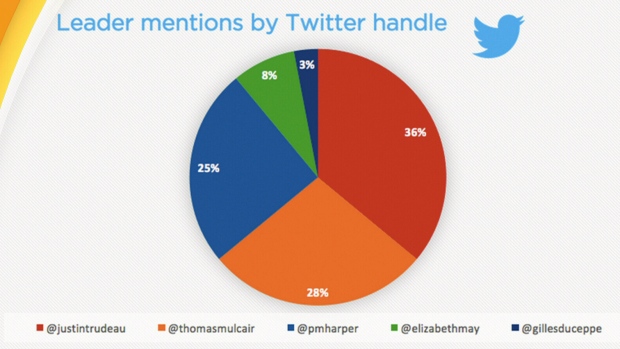 In terms of follower growth, each of the three main leaders have logged a "win," he added.

Trudeau gained the most followers throughout the campaign with 94,000 new followers.

Mulcair entered the race with the least number of Twitter followers, but gained the most percentage, with 29 per cent growth.

Meanwhile, Conservative Leader Stephen Harper still has the most Twitter followers compared to the other leaders, with 919,000 followers.

"Each of the big three parties have a positive story to spin out of this data," Doyle said.