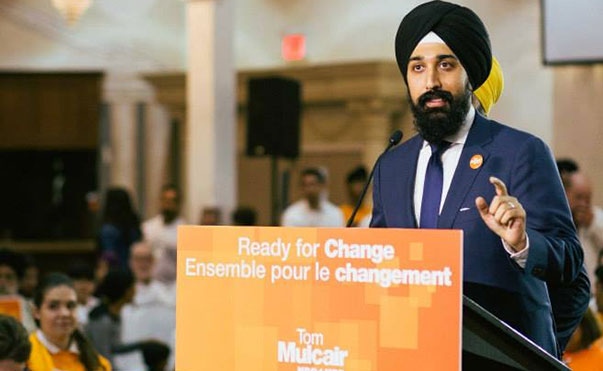 OTTAWA -- An NDP candidate who once told a TV program same-sex marriage could lead to polygamy and public nudity, is offering an apology and says he no longer holds those views.

Harbaljit Singh Kahlon also said during the 2005 OMNI TV show that there is no research that gays are born homosexual.

"I do not hold these views and apologize unreservedly for making these comments in 2005," Singh Kahlon said in a statement.

"I want to reaffirm my commitment to protecting human rights for all people in all circumstances without exception."

Singh Kahlon is one of the party's top candidates in the Greater Toronto Area, running in the hotly contested riding of Brampton East. He was the campaign chair to MPP Jagmeet Singh, deputy leader of the provincial NDP.

On Tuesday, in nearby Mississauga-Malton, Jagdish Grewal was dropped as the official candidate for the Conservative Party for comments he made about conversion therapy for gay youth. Grewal stood by his position that parents of gays should have the "right to bring them back to their straight life," and has said he will continue to run.

Singh Kahlon appeared on the Punjabi-Canadian television show Chardi Kalaa in 2005 which was discussing same-sex marriage. Same-sex marriage was made legal in Canada that year.

"If we change for them, what are we going to be doing tomorrow? Are we going to be accepting people actively living in the nude?" Singh Kahlon said in English. He was identified as being with York University, where he was a business student.

"There are other issues that would be classified as scaremongering, but these are obviously real issues that also come along with human rights," he added, using his hands to indicate quotation marks around the phrase human rights.

Another student, identified as Jasdeep Walia, debated Kahlon and argued that Sikhism promoted tolerance of all people.

"I think there's no research that says gays are born gay; it's a choice they make upon lust," Singh Kahlon said.

Last month, the party said it was standing behind its candidate in Scarborough-Rouge Park, Rev. KM Shanthikumar, who opposes abortion and same-sex marriage.

Shanthikumar said he stands by the NDP line on the issues, while keeping personal views.