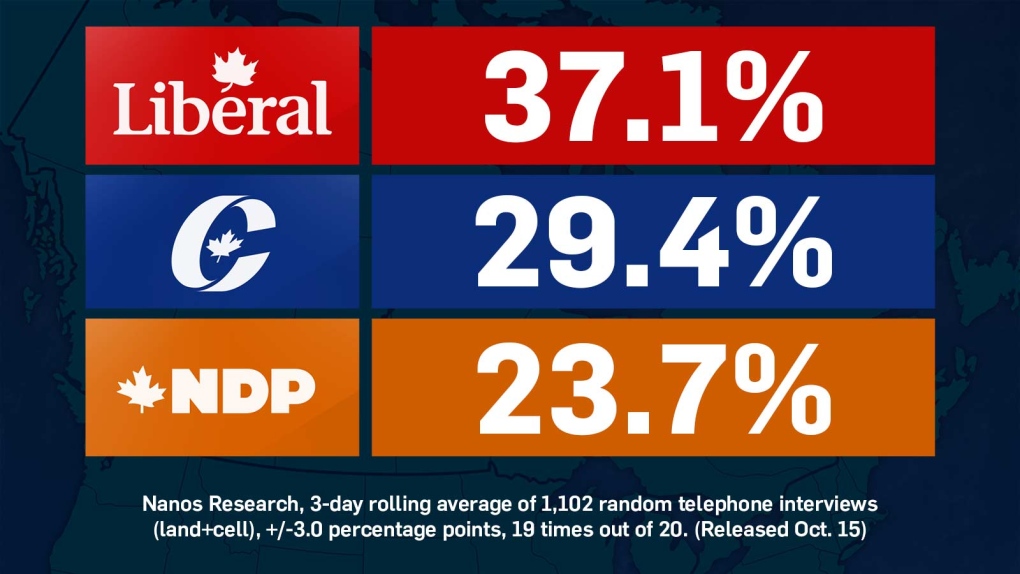 The latest nightly tracking conducted by Nanos Research for CTV News and The Globe and Mail shows the Liberals have hit an election-high level of support among voters, largely at the expense of the NDP.

One month ago, it was practically a three-way tie between the major parties in the federal election. In the past 30 days the Liberals have gained about seven points of support -- from 29.6 per cent to 37.1 per cent.

Most of that gain has come at the expense of the NDP, which has since its support drop about six points, from 30.4 per cent to 23.7 per cent.

The Conservatives, meanwhile have remained relatively unchanged, with their support dropping slightly from 31.0 per cent to 29.4 per cent when the margin of error for the research is factored in.

Voters were asked: “If a federal election were held today, could you please rank your top two current local voting preferences?” Of those who said their first choice was the Conservatives, 44 per cent said they had no second choice.

A national dual-frame (land and cell) random telephone survey is conducted nightly by Nanos Research throughout the campaign using live agents. Each evening a new group of 400 eligible voters are interviewed. The daily tracking figures are based on a three-day rolling sample composed of 1,200 interviews. To update the tracking a new day of interviewing is added and the oldest day dropped.