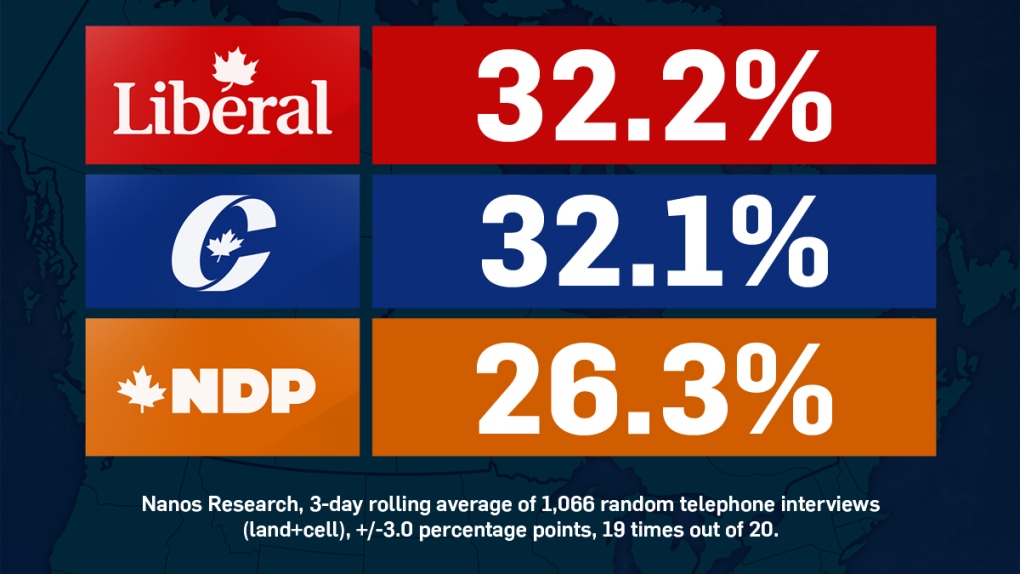 The latest nightly tracking by Nanos Research for CTV News and The Globe and Mail shows a dead heat between the Liberals and Conservatives for first place, with the NDP trailing.

Voters were asked: "If a federal election were held today, could you please rank your top two current local voting preferences?"

The NDP continued to see their lead soften in Quebec, where the Liberals and the Bloc Quebecois each made modest gains. The Bloc Quebecois have now passed the Conservatives as the third-most preferred choice for voters in Quebec.

The Liberals hold a marginal advantage over the Conservatives in Ontario, with the NDP trailing in third.

The Conservatives remain the top choice in the Prairies, and the Liberals hold a comfortable lead in Atlantic Canada.

A national dual-frame (land and cell) random telephone survey is conducted nightly by Nanos Research throughout the campaign using live agents. Each evening a new group of 400 eligible voters are interviewed. The daily tracking figures are based on a three-day rolling sample composed of 1,200 interviews. To update the tracking a new day of interviewing is added and the oldest day dropped. The margin of error for 1,066 decided voters is ±3.0 percentage points, 19 times out of 20.