As the marathon federal election campaign passes its halfway mark, it appears that Stephen Harper’s Conservatives are losing support while Tom Mulcair’s New Democrats have pulled into the lead. And Justin Trudeau’s Liberals are close behind the NDP.

According to the new nightly tracking from Nanos Research -- conducted for CTV News and The Globe and Mail -- if an election were held over the Labour Day weekend, it would be a two-way race between the NDP and the Liberals.

The latest survey shows each party’s support at: 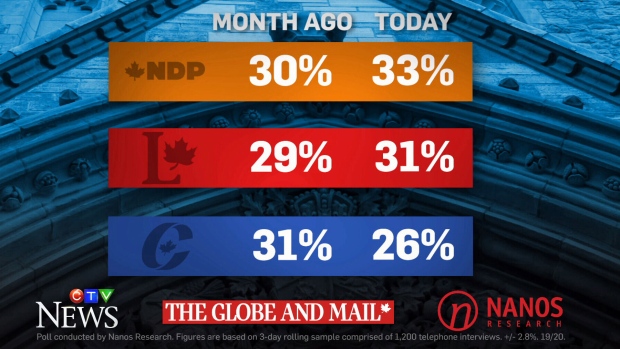 This represents a notable five-point drop for the Conservatives compared to just one month ago, when the Tories sat at 31.2-per-cent support – a blow to a party that began the race in first place.

That support has slid over the past month as revelations emerged out of the Duffy trial, the economy slipped into a recession and the Tory leader was faced with tough questions over his government’s response to the Syrian refugee crisis.

"They’ve had a problem or an issue managing the Syrian refugee affair, and I think that was the emotional trigger for a lot of Canadians," Nik Nanos, chair of Nanos Research, told CTV News. "It looks like it was the tipping point."

According to the latest numbers, the NDP lead in Quebec and B.C., while the Liberals lead in Atlantic Canada and Ontario. The Conservatives hold the highest support in the Prairies.

"There is not a lot of growth potential for the Conservatives," Nanos said. "They don’t have a lot of second-choice voters out there, so they really got to energize their campaign." 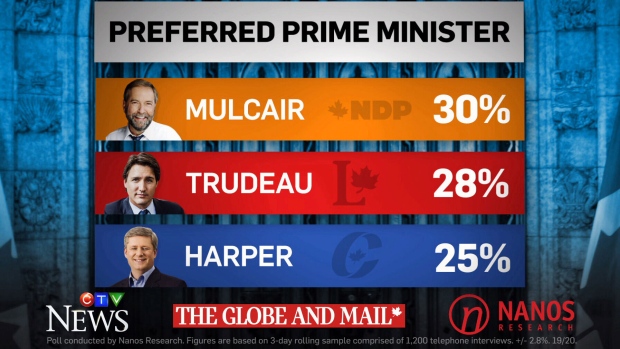 Trudeau is up 5 percentage points from last week, but the question remains as to whether he can keep up the momentum, Nanos said.

Asked which leader has qualities to be a good political leader, respondents ranked Mulcair in first (62.8%), Trudeau in second (53%) and Harper in third (49.3%).

The numbers come at a critical point in the campaign – Labour Day – when many Canadians head back to work and have traditionally paid closer attention to the election issues.

A national dual-frame (land and cell) random telephone survey is conducted nightly by Nanos Research throughout the campaign using live agents. Each evening a new group of 400 eligible voters are interviewed. The daily tracking figures are based on a three-day rolling sample comprised of 1,200 interviews. To update the tracking, a new day of interviewing is added and the oldest day dropped. The margin of error for a survey of 1,200 respondents is plus or minus 2.8 percentage points, 19 times out of 20.