Sen. Mike Duffy unleashed another bombshell in the Senate Monday, telling the upper chamber that the Conservatives not only paid him more than $90,000 for his disputed expenses, but that they also covered his associated legal fees.

Duffy alleged he received $13,560 to cover his legal fees from the Conservative Party through party lawyer Arthur Hamilton.

"The PMO had the Conservative Party's lawyer, Arthur Hamilton, pay my legal fees," Duffy said in an impassioned speech.

Immediately after Duffy's address to the Senate, Hamilton told CTV News he had no comment on the allegations.

Duffy also claimed Monday that he "never saw a cheque from Nigel Wright.”

The Prime Minister’s Office has repeatedly said that Wright, Stephen Harper’s former chief of staff, acted alone in deciding to write a $90,000 cheque to Duffy to help him repay housing expenses deemed inappropriate by an outside audit earlier this year.

"But I do have a cheque stub from Arthur Hamilton, the Conservative Party lawyer," said Duffy, referencing the $13,000 payment.

"The links to the $90,000 payment and now the further $13,000 payment from the party lawyer to my lawyers show that this monstrous fraud was PMO's creation from start to finish," he claimed.

Speaking to the Senate, Duffy tabled a number of emails and documents, alleging they show that the PMO was behind an elaborate plan to make the controversy over his expenses disappear.

"When you look at all those emails in that chain, it proves this was set up from the start, and that I am innocent," he said. "The cheques tell who is telling the truth and who is not."

One of the documents tabled by Duffy was an email from Wright dated Dec. 4, 2012 -- the same day news of Duffy’s housing claims first came to light.

In it, Wright states: “I am told that you have complied with all the applicable rules and that there would be several Senators with similar arrangements. I think that the Standing Committee might review those rules.”

Duffy also alleged the initial story about him taking out a $90,000 bank loan to make the repayment was scripted by the PMO.

“That line was written by the PMO to deceive Canadians as to the real source of the $90,000,” he said. “The millions of Canadians who voted for Prime Minister Harper … would be shocked to see how some of these people, how some of these Tories, operate.

“They have no moral compass. They talk a great game about integrity. But in my experience they demonstrate every day they don’t understand the meaning of the phrase: ‘The truth, the whole truth, and nothing but the truth.’ ”

Duffy also said among the documents he tabled was an email from Wright that urged the Senate leadership to "fall in line."

That email thread is dated Feb. 11, 2013 -- the same day Senators Marjory LeBreton and James Cowan released a letter asking the Senate’s internal economy committee to probe all housing claims made by Senators to confirm their validity.

In his speech, Duffy insisted he had only made "minor expense errors" in his claims that amounted to $437.

The former Conservative senator asked that the Senate withdraw the motions seeking to suspend him, along with Pamela Wallin and Patrick Brazeau, without pay or benefits, calling it “unjust.”

All three senators, along with the now-retired Mac Harb, were forced to repay thousands of dollars after outside audits uncovered ineligible expense claims.

The RCMP is investigating the expenses. No charges have been laid. 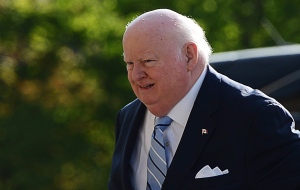