Don Martin: Trudeau is the pandemic polar opposite of Donald Trump 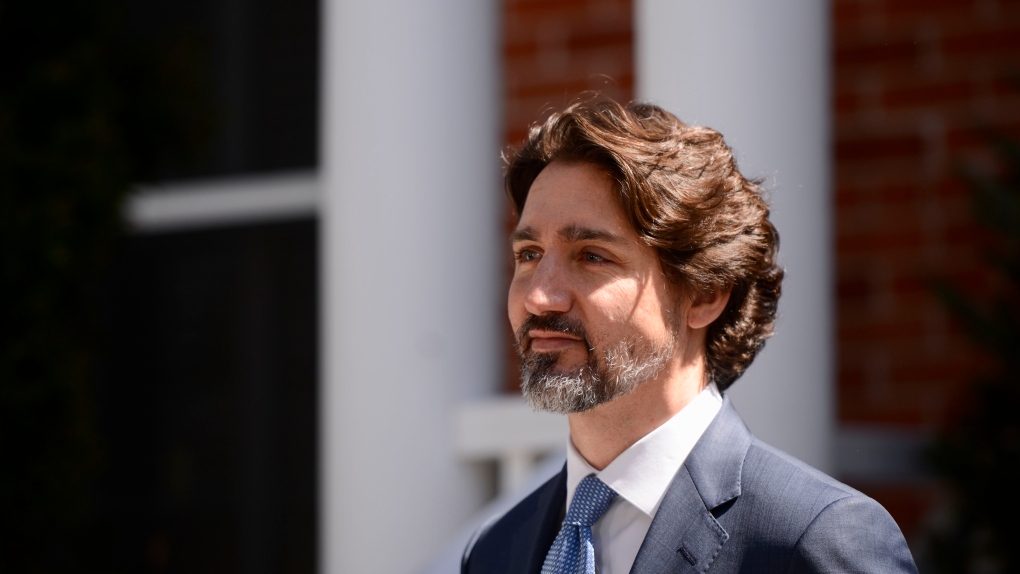 Prime Minister Justin Trudeau takes part in a press conference at Rideau Cottage during the COVID-19 pandemic in Ottawa on Wednesday, May 13, 2020. THE CANADIAN PRESS/Sean Kilpatrick

OTTAWA -- When it comes to pandoptics, in real words being displays of shared symbolic pain during this COVID-19 crisis, Justin Trudeau is without equal in Canadian and perhaps global politics.

The prime minister has excelled at taking steps to showcase his life in a pandemic as being just like the rest of us mere voting mortals.

For example, Trudeau remains rooted to the bland front steps of his residence for the daily media briefings, which are of increasingly pointless news value although priceless as spending-spree grandstanding.

They usually start with the prime minister being uncharacteristically punctual. This is to show he’s serious about regularly and reliably connecting with stay-at-home viewers across the country.

And while it would be easier to do these events in the National Press Theatre or from the West Block foyer, beaming live from the prime minister’s residence makes it appear he’s shouldering the burden in isolation while his family hangs out at the Harrington Lake retreat.

Then there’s that hair – unshorn for months, increasingly wild and infuriatingly thick for the follicly challenged like me, it wafts with the wind only to reveal, incredibly, no sign of grey hair.

Trudeau could summon his regular stylist and have it trimmed without a backlash, but that would signal a disconnect from the shaggy-haired masses who appear to be dying their roots grey so he happily lets it flow in the breeze.

And now this: Trudeau has publicly vowed to wear a face mask whenever he’s at risk of encountering anyone who might get too close for coronavirus comfort.

Ironically, he shunned a personal COVID-19 test at first, even after his spouse came down with the virus.

But that too was a defiantly symbolic act by a prime minister who didn’t want to be seen jumping to the front of the testing line which, in his case, was clearly warranted.

All this has positioned Trudeau as the pandemic polar opposite of Donald Trump.

The U.S. president clearly hasn’t missed a day without extensive expert attention to keep that coiffed creation in cover-up position and he’s never allowing a mask to touch his artificially-bronzed face in public lest it show he reacts to viral fear.

So while Trump with his business-as-usual behaviour and mask aversion are motivating Americans to ignore precautions, Trudeau is showcasing his compliance with public health ordinances to inspire Canadians to follow suit.

That begs this question: If the face mask is an essential health precaution for a prime minister, should it be mandatory for everyone as a reopened Canada creates crowded indoor environments?

If a face mask reduces the risk of catching the virus from that sneezing, coughing shopper passing you in supermarket aisle 6, shouldn’t it be compulsory?

Personally, I hope not - and not just because they’re uncomfortable, steam up your glasses and make everyone look creepy, especially in a bank.

It just seems a drastic step to cover up your face or cough up a fine, even in this new world order of heavy-handed public health power, while some provinces edge tantalizingly close to eradication without it.

But the face mask goes beyond the subtle symbols Trudeau has displayed since this crisis began.

With his actions and words, Trudeau is saying face masks reduce the risk of a public health hazard that’s killing thousands of Canadians.

That sets up the prime minister for a test that goes beyond harmless symbolism.

If pandoptics matter, the prime minister may have to support mandatory face mask legislation.

If he doesn’t, it unmasks Trudeau as a pandemic poster boy showcasing for political gain. So he might as well get his hair cut.