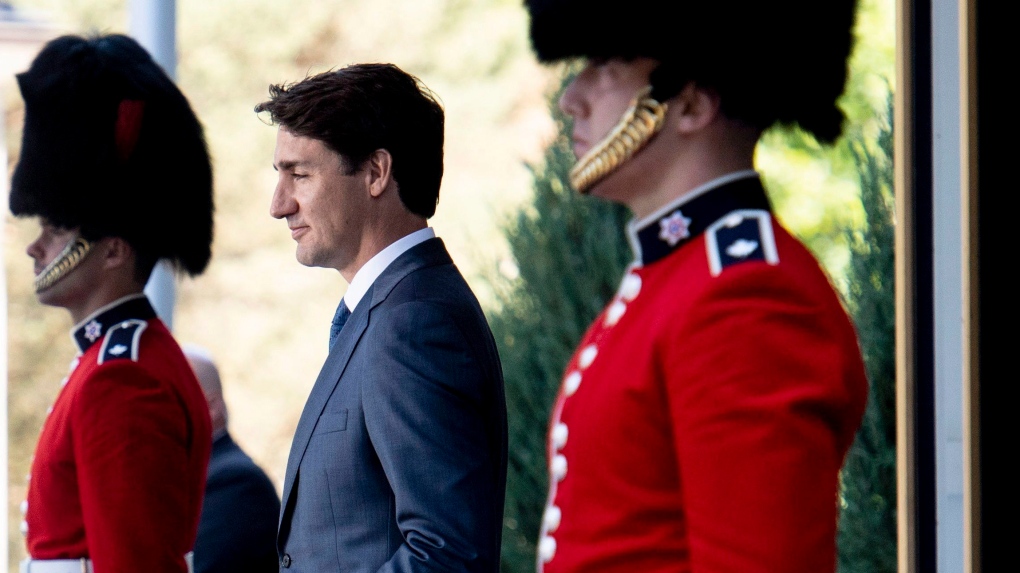 Prime Minister Justin Trudeau passes members of the Ceremonial Guard as he arrives for a press conference following a swearing in ceremony at Rideau Hall in Ottawa on Wednesday, July 18, 2018. THE CANADIAN PRESS/Justin Tang

It's bigger, but that’s not to say it is any better.

Boosted by five new ministers—who in turn will be bolstered by plenty of support staff and the costly perks of executive office—the Trudeau election-ready cabinet is bordering on bloated with overlaps and carved-out creations aimed at tackling nagging problems.

Yet there's never been proof that adding ministerial muscle reduces the temperature of hot-button issues.

The reality is that building new ministries can complicate problem-solving in files where immediate action may be required.

Take, for example, the problem of 'irregular migration' if you’re a Liberal (or 'illegal queue-jumping' if you’re a Conservative).

The asylum seekers are still streaming across the border at a hard-to-handle pace and bee-lining for Toronto.

Until today, it was a shared headache for the public safety and immigration ministers. The Trudeau response was to add a third minister to cover the file, elevating former top cop Bill Blair into a new border security portfolio with special attention on asylum seeker complications.

Left unsaid is how much power he’ll have to do big things like rip up the controversial Safe Third Country agreement, which is a catalyst for the refugee rush from the U.S., or which of the three ministers lumped together on this file has the final call if action is required.

The challenge of herding cranky provinces into a cordial relationship with the federal government now has a designated minister in Dominic LeBlanc after the prime minister gave up that responsibility.

This appears to end Trudeau’s revival of First Ministers Conferences as a kumbaya group hug of peace and intergovernmental harmony.

Unhappy premiers will be left to bend the ear of a former fisheries minister in LeBlanc, who was born into politics and has a low tolerance for those who obstruct the federal government’s will. War, not peace with the provinces, seems to be his marching orders into the future.

Of course, expecting a dramatically improved government from a cabinet shuffle is a bit like expecting a vastly superior car to suddenly roll off the assembly line after a shift change.

All ministers great and small meekly answer to their masters in the Prime Minister’s Office.

Ministers get mandate letters which are published and action progress which is publicly tracked. Failure to deliver on PMO command can compromise your cabinet promotion potential and there’s zero tolerance for freelancing.

Still, that’s not to say there weren’t some interesting moves in the surprisingly large shuffle.

Creating a minister of seniors is a significant nod to a growing demographic which leans Conservative. But the position can’t deliver squat unless it’s backed by megabucks, so expect the next budget to emphasize an aging population.

Shifting Jim Carr from natural resources, where he made significant contacts south of the border, to the international trade gig is a smart move, particularly if it’s designed to give the foreign affairs minister additional heft on the U.S. trade file.

And extracting Melanie Joly from the difficulties she experienced as Heritage Minister will give the Liberals time to enact damage control under the supervision of wily veteran Pablo Rodriguez.

Add it up and there are signs that Trudeau understands the problems, the policies and personalities he needs to fix before facing the electorate.

But there’s a risk to opting for cabinet expansion over prudently stripping away any deadwood.

After all, the 2014 shuffle saw Stephen Harper's cabinet swell to an historic high of 40 members. A year later, he was defeated.

In designing cabinets, perhaps size does matter after all.