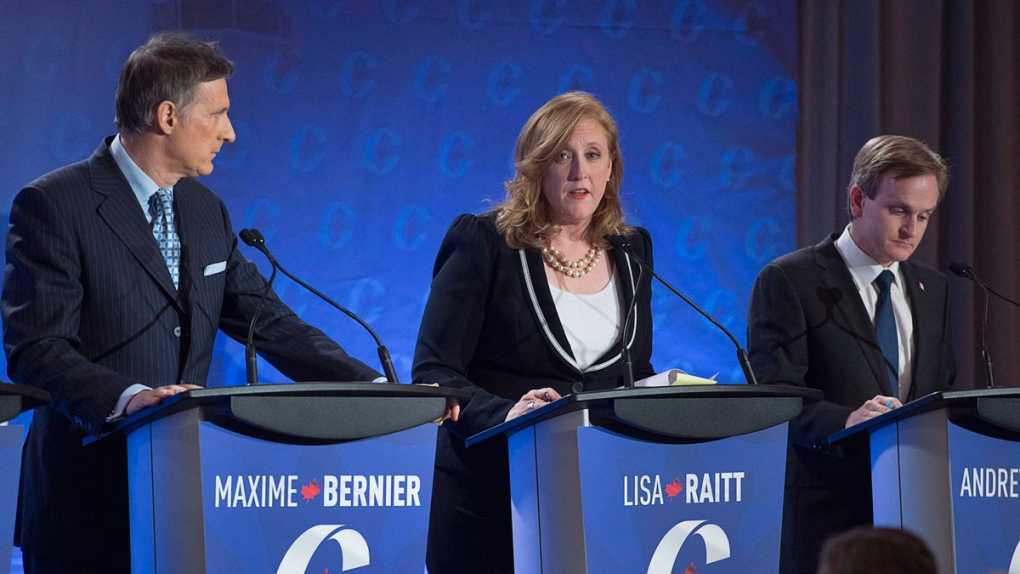 Lisa Raitt is flanked by Maxime Bernier, left, and Andrew Saxton at the Conservative leadership candidates' bilingual debate in Moncton, N.B. on Tuesday, Dec. 6, 2016. Conservatives vote for a new party leader on May 27, 2017. THE CANADIAN PRESS/Andrew Vaughan

With the MPs gone for the year, it's time for my 2017 political predictions, safe in the knowledge everyone will have forgotten how wrong they were by this time next year.

As many voters’ second choice on the preferential ballot, Maxime Bernier squeaks out a win in May's Conservative leadership. It will be a hard fought battle in a bitterly divided party with controversial Kellie Leitch finishing a strong second.  Bernier pointedly names Lisa Raitt, who finished third, as deputy leader.

Reality TV star Kevin O'Leary opens big in his bid, but fades in the home stretch and finishes fourth.

There will be a mid-term cabinet shuffle in 2017, potentially as early as next month, although waiting for the summer break and a September prorogation is seen as more likely.

President Donald Trump will visit Canada in the fall, right after he swings by Russia for a bear hug from buddy Vladimir Putin. The smiling photo-ops and insider confidences suggesting the meeting went remarkably well until Trump tweets that he was glad he didn't require treatment from socialist Medicare during the visit.

NAFTA, as it relates to Canada, will endure a Buy American tweak, but remain essentially unchanged.

Canada will deploy 600 troops to peacekeeping operations in war-ravaged Mali. Canadians are told to brace for casualties.

The ethics commissioner says Prime Minister Justin Trudeau was only in a perceived conflict for attending paid events where special interests bent his ear.  Trudeau declares he will no longer attend private fundraisers and orders the Liberal party to banish lobbyists and interested business people from any pay-for-access event where cabinet ministers mingle.  The opposition is unimpressed.

So there you have it: Parliament Hill in 2017, all of it subject to change without notice. But if I’m right on at least 50 per cent of these predictions, I’ll remind you this time next year.