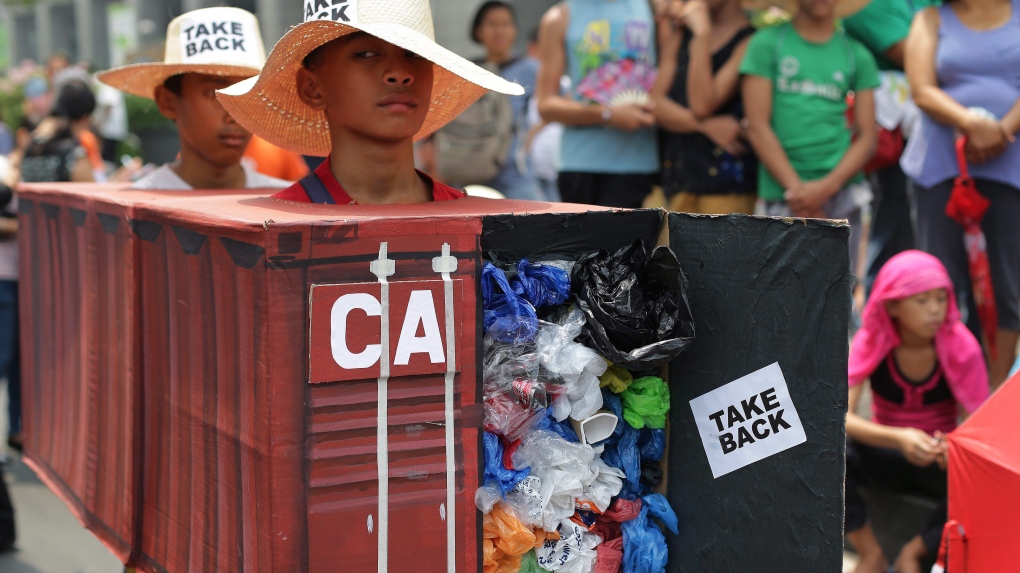 Filipino environmental activists wear a mock container vans filled with garbage to symbolize the 50 containers of waste that were shipped from Canada to the Philippines two years ago, as they hold a protest outside the Canadian embassy at the financial district of Makati, south of Manila, Philippines on May 7, 2015. THE CANADIAN PRESS/AP, Aaron Favila

It's been a dozen years since I was assigned to follow garbage trucks down the 401 and across the U.S. border to watch them dump Toronto waste into Michigan landfills.

To furious residents posting protest signs along the quiet streets rattled by thousands of our trucks every year, we were reprehensible Canadian trash. Their understandable anger at this inexplicable export festers today.

But across the south Pacific, we've got another rank reputation from 77 huge shipped-from-Canada containers oozing the queasy discharge of six-year-old toxic rot as nose-wrinkling fumes waft through the Manila air. Say what you want about Philippine President Rodrigo Duterte, and there's a lot to dislike, but this week's fed-up blast at Canada's negligence in removing this olfactory assault suggests he has a good grasp of the Trudeau government.

Sure, it's hysterical hyperbole for him to declare war over decomposing adult diapers. But as a way to focus public and political attention on a problem Canada was negligently ignoring, perhaps in violation of international treaties, Duterte hit a political home run.

Environment Minister Catherine McKenna quickly gulped out a promise to devise a taking-away-the-trash resolution within weeks. Then she curiously noted the president’s caustic threats were not helpful.

Actually, that is the only way to communicate effectively with this government.

It only acts under extreme provocation. The ministers are notoriously action-averse, lean toward paralysis by analysis and, when all delays fail, prone to breaking their promises.

Take what's happening in Grassy Narrows First Nation, where the long promised treatment center to help those mercury-poisoned in the 1960s still languishes on the drawing boards. Or this week's emergency airlift of residents from the perennially-flooded Kashechewan First Nation, this despite the money being budgeted and a feasibility study completed which would relocate them to higher ground.

And those are just a couple foot-dragging examples this week.

Advocates know by now it takes a public relations crisis, a virtue the PMO wants to signal or a SNC-Lavalin lobbying blitz to spur this government out of its usual state of stupor.

Sure, taking the time to do politics right can be commendable.

But to deal with toxic material mislabeled as recyclable garbage in shipments to a foreign country requires no further foot-dragging: Burn it there or bring it back here. Now.

So give Duterte credit this time: He correctly figured out the only way Trudeau would take out the trash would be to raise a stink.