Despite suggestion, shorter skirts not the way the military is trying to recruit more women 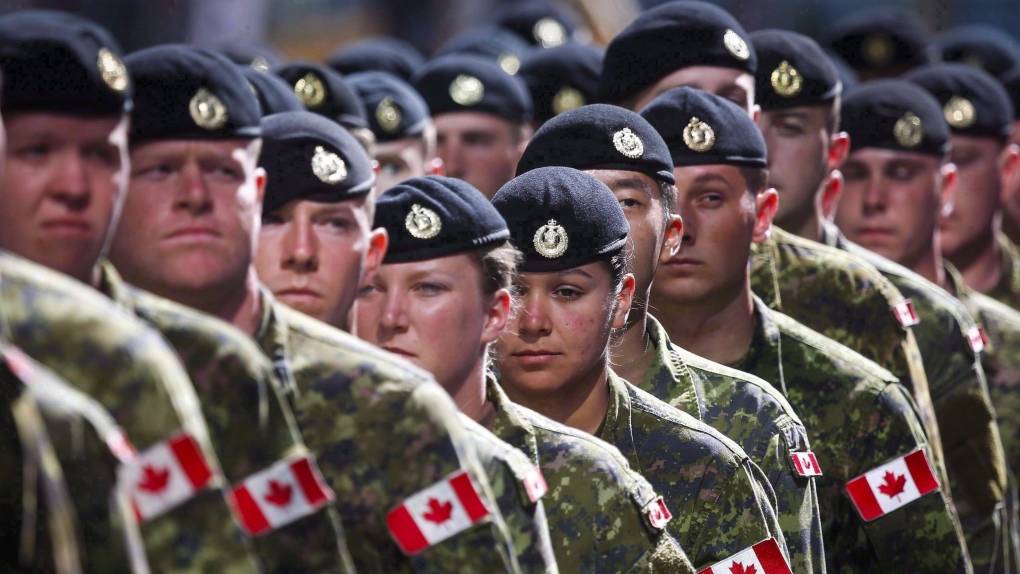 Members of the Canadian Armed Forces march during the Calgary Stampede parade in Calgary, Friday, July 8, 2016. THE CANADIAN PRESS/Jeff McIntosh

OTTAWA -- The commander in charge of recruiting more women into the military says they aren't following through on an internal suggestion to shorten the uniform skirt.

A "Tiger Team" report focused on increasing the number of women the Canadian Armed Forces, drafted in 2017 and first reported on by The Ottawa Citizen, revealed a series of internal recommendations on how to reach the goal of 25.1 per cent women in their ranks by 2026, up from the current 15.9 per cent.

In addition to a handful of eyebrow-raising ideas that also included running advertisements that compare medals to 'bling' and 'war paint' to makeup, the document looked at the current barriers women perceived about a career in the military and offered suggestions on how to combat those beliefs, including several other recommendations that the Forces have since enacted.

According to Vice-Admiral Haydn Edmundson, who is the commander of Military Personnel Command, the military has not accepted all of the contents of the report, as it contains what he described as "brainstorming ideas," that didn't "reflect the context and the intent behind the Canadian Armed Forces' pursuit of women in the Armed Forces."

One example of this was the pitch that the uniform skirt be tailored "to be slimming in cut and shorter.”

Edmundson said, while there have been changes to the uniform, a shorter skirt is not one of them.

"We did not pursue a shorter tighter skirt… in fact that particular initiative did not even make it across the desk of my boss at the time, and it would certainly not get across my desk today," Edmundson told CTVNews.ca.

Though, the military has made some uniform changes, including allowing women to wear flat shoes, opt out of putting on nylons, and style their hair in ponytails rather than the bun that was required previously. There is also a sub-committee of the military dress committee that advises on women-specific dress issues.

"When we do these brainstorming sessions… we must have people in that room that have no fear that what they're saying will be used to judge them because they came up with an idea that might seem silly at the time," Edmundson said.

Another of the report’s recommendations to entice more women recruits was a series of video advertisements that sought to appeal to women, particularly young women. Among the proposals were to film a video showing male and female coworkers gathering for a "camp fire at a sandy beach" where they "grill marshmallows" laugh, and relax, which was meant to "show friendship and trust."

A different campaign proposal suggested such slogans as "bling are my medals"; "my kicks are combat boots"; and "my war paint is camouflage (makeup)". Though there were also recommendations to create marketing that promoted the ability for a work-life balance, a safe work culture, and featured current female Canadian Armed Forces "role models."

While the campfire and camouflage advertising strategies aren't being used, the military is working on highlighting current women in the Forces, with a focus on "demonstrating what they're doing and their pride in what they're doing," Edmundson said, describing this approach as a way to illustrate that women can and have been successful as members of the Canadian Armed Forces.

The document also highlighted the deterrents to entry that women reported, such as having to relocate on deployment - meaning they'll potentially be far from family and friends; having to meet a certain level of physical fitness; the potential for career progression and work-life balance; sexual harassment within the Canadian Armed Forces; and "discomfort with a profession that involves combat, war/fighting, potential of killing people (especially innocent people)."

The report also looked at motivating factors and found that women were interested in other aspects of a military life, such as "helping and protecting others"; having a respected profession with a stable income and benefits; and the opportunity to travel.

Edmundson said that as part of the ongoing efforts to both recruit more women and retain more female members of the Canadian Armed Forces, the military is making changes around child care and has been running a program that allows women to essentially try out the military. The program, called "Women in Force" sees curious candidates go through what it's like to be recruited by spending time at military facilities where they can get a sense of the range of occupations available within the Forces.

When the "Tiger Team" research was conducted, the percentage of women in the military was 14.1 per cent. While it's now reached 15.9 per cent, it’s far short of target 25 per cent female members in six years.

Edmundson says it's nevertheless "absolutely" an attainable goal, one that will need focus on both attracting new members are preventing the attrition of existing members.

"If you don't have a tough goal to go after, then you're in the wrong business. So we like that goal. We're going to go after it, we think we can achieve it. It's just going to take a lot of work to get there," he said. "It means we're going to have to be very adventurous."