OTTAWA -- More than four years after Prime Minister Justin Trudeau decided not to reside at 24 Sussex Drive, there remain no concrete plans for renovations to the deteriorating building as it costs taxpayers millions of dollars in basic upkeep, sources tell CTV News.

Documents obtained by CTV News detail the “urgent repairs” needed at the prime minister’s official residence, including 60-year-old windows, as well as electrical and plumbing systems that are “beyond their life cycle.”

The building’s indoor pool, built in 1975, is costing thousands of dollars annually, but is “not useable and needs to be rebuilt,” according to documents.

Significant improvements are also needed to increase accessibility and security of the property.

The building has served as the official residence of the prime minister since 1951. It consists of 1.6 hectares of land and five buildings, including the 35-room main residence, built in 1868.

Aside from the pool, there have been only minor alterations to the property since 1954, including the enclosure of the west terrace in 1964 and the addition of a garage lean-to in 1973.

“It is the home of the most significant person of our executive, but unfortunately what it represents now is demolition by neglect,” Leslie Maitland, former president of Heritage Ottawa, told CTV News.

In October 2015, Trudeau revealed that he and his family would be staying across the street at Rideau Hall during his time as prime minister. The Prime Minister’s Office said Thursday Trudeau and his family occasionally use the pool at 24 Sussex, while staff uses the kitchen and some offices on the property.

Without a permanent tenant, the government has spent more than $2.3 million in building upkeep at 24 Sussex since 2015, including:

According to one note prepared for the prime minister back in 2017 citing previous media reports, costs to renovate the building -- including security upgrades -- were forecast at $34 million to $567 million. 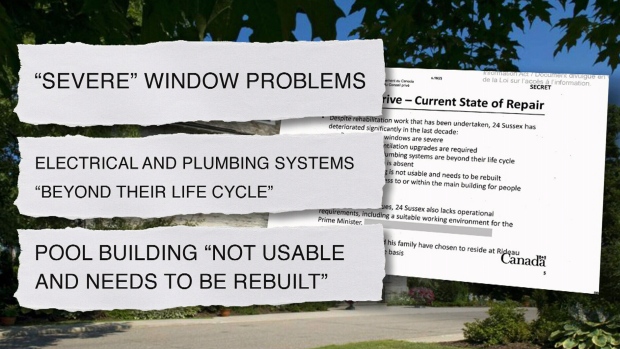 With these improvements, a Privy Council memo from 2018 warned "there is likely to be strong interest from stakeholders and potential negative reaction to cost implications."

Given the expected costs, there doesn’t seem to be much urgency on the part of the government. Officials have yet to issue a contract for repairs, begin a public consultation or declare plan for renovations.

Aaron Wudrick, the federal director of the Canadian Taxpayers Federation, said the reparation costs are inevitable and kicking them down the road is not the right approach.

“No prime minister wants to be seen spending the money on themselves, but the reality is this building is not going to fix itself," he said.

Catherine Clark, who lived in 24 Sussex while her father Joe Clark was prime minister between 1979 and 1980, believes it’s time to get creative with the building.

"There is a real argument to be made at this point for tearing it down and rebuilding from scratch with all-Canadian materials, Canadian designers and architects," she said. "Make it evironmentally sustainable."

While 24 Sussex is the most noteworthy building in need of renovations, the NCC has said it needs another $80 million to maintain the rest of Canada’s official residences at a “fair level.”

In a statement, the National Capital Commission said it “continues to work with its federal partners to develop a plan for the future of the official residences and of 24 Sussex Drive.”

“The NCC recognizes the historic and symbolic importance of the residence of Canada’s prime minister and is ensuring that all aspects are taken into consideration, so the federal government is able to make a prudent and informed decision,” the commission wrote in the statement.

“Among others, issues related to security, functionality, environmental sustainability, universal accessibility, design excellence and heritage preservation are taken into consideration in our preparations.”