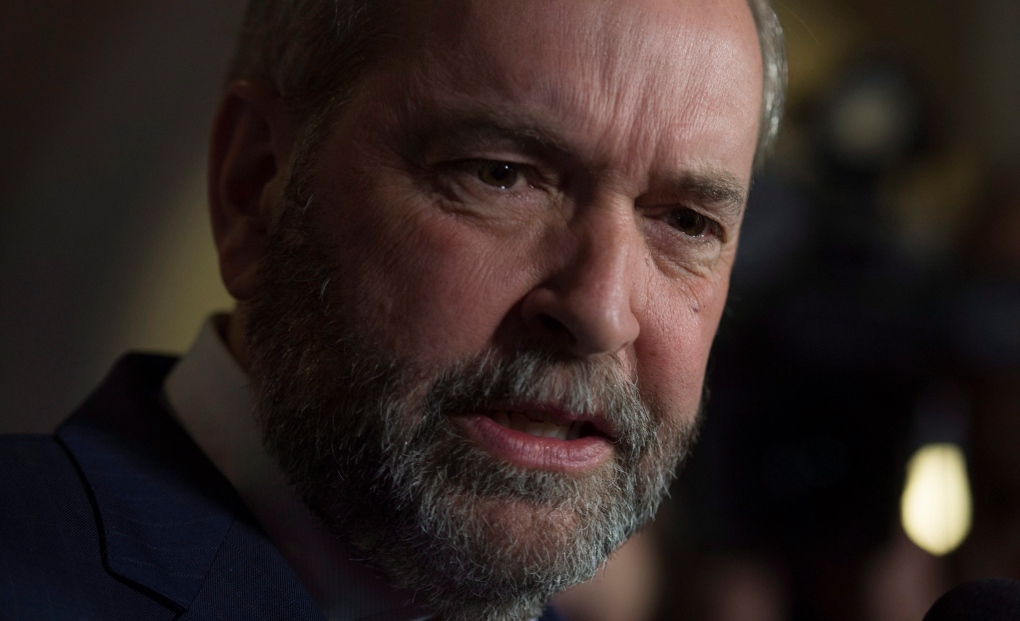 OTTAWA -- New Democrats across Canada are licking their wounds again following a devastating loss in Manitoba that saw the end of Greg Selinger's term as premier.

Tuesday's defeat is only the latest in a string of electoral disasters for a party that finds itself needing to rebuild across the country.

Federal leader Tom Mulcair -- badly defeated in the election in October, then again earlier this month when delegates at the party's convention in Edmonton roundly rejected his leadership -- shrugged off the loss Wednesday.

"I think that we've been in power for something like 16, 17 years in Manitoba," he said. "After four full majority mandates, change is not something that comes totally unexpectedly."

"The things that we fight for in terms of working people and social democratic values, those issues don't change overnight," Blaikie said. "Legislatures do, governments do, but the issues don't."

Here's a look at the challenges the NDP faces across the country:

The Progressive Conservatives will form one of the biggest majorities in the province's history after Tuesday's win; the NDP lost most of its cabinet ministers, and outgoing premier Greg Selinger will step down as leader.

Paul Thomas, political science professor at the University of Manitoba, said the NDP will likely take its time in finding Selinger's permanent successor.

"They've got lots of rebuilding to do in other aspects of their operation as well," said Thomas, pointing to a divisive leadership struggle that Selinger survived in 2015, causing many backroom stalwarts to leave.

The New Democrats will head into an election campaign next spring facing a Liberal government looking to win a fifth consecutive mandate.

In 2013, the New Democrats entered the campaign with a 20-point lead in public opinion polls only to lose to Christy Clark's Liberals. Adrian Dix stepped down as leader and was replaced by John Horgan.

The Liberals portray the NDP as an anti-jobs party, saying they oppose development of a liquefied natural gas industry and the massive $9 billion Site C hydroelectric dam.

Times have been tough for the NDP in Saskatchewan, the adoptive home of Tommy Douglas, the first New Democrat leader. The party has lost the last three provincial elections, its share of the popular vote shrinking each time.

In 2011, the NDP was reduced to nine of the 58 seats in the legislature; even leader Dwain Lingenfelter lost his seat.

The NDP looked to a younger leader in Cam Broten to help it rebuild, but the party didn't seem to gain momentum before the April 4 vote, winning just 10 of 61 seats, and losing its leader for the second straight time.

Ontario NDP Leader Andrea Horwath has struggled since she triggered the 2014 election by refusing to support the Liberal budget, costing the New Democrats the balance of power when the Liberals won a majority government.

Horwath took a lot of heat from disgruntled party veterans who openly complained she moved the NDP too far to the centre in an attempt to get elected, but with two years to go before the next election, there have been no open challenges to her leadership.

In two weeks, Premier Rachel Notley and her NDP majority government will pop the champagne corks on the one-year anniversary of their election win.

In the last 12 months, the government has drafted a blueprint for a new economy based on moving away from the traditional oil and gas sector toward more hi-tech jobs and higher learning. Simultaneously, they are spending on infrastructure while also introducing a broad-based carbon tax to remake the face of Alberta as both cleaner and greener.

Alberta was debt-free just over a decade ago, but is now looking at $58 billion in red ink in just three years.

"They have to find a way to sell the vision and to make sure that come re-election time their vision is not seen as an inherent negative or somehow adding to Alberta's economic woes," said political analyst Bob Murray.

The NDP in Newfoundland and Labrador seemed on the rise through much of the past decade, but political scientists say an internal squabble managed to turn gains into a major setback.

Lorraine Michael led the third-place party to historic results, winning five seats in 2011. But she announced in 2015 she was stepping down after a rift over her leadership that saw two of her five members leave caucus.

Since then, the party slid in popularity, byelection results were poor and new leader Earle McCurdy didn't manage to win his seat in the fall election.

In Nova Scotia, Erin Crandall, a professor of political science at Acadia University, says there is a wider base for the party than elsewhere in Atlantic Canada due to its urban base in Halifax.

She said Nova Scotia has evolved into a "strong three-party system," and that the fortunes of the NDP -- which spent a term in government before falling to the Liberals in the last election -- will depend on how clearly it presents its message.

The challenges of governing during a recession might have defeated any of the three major political parties, Crandall said.

"It's entirely possible people will look back on that period and say, 'It wasn't as bad as we thought."'

-- With files from Dirk Meissner in Victoria, Dean Bennett in Edmonton, Keith Leslie in Toronto, Steve Lambert in Winnipeg, Jennifer Graham in Regina and Michael Tutton in Halifax.