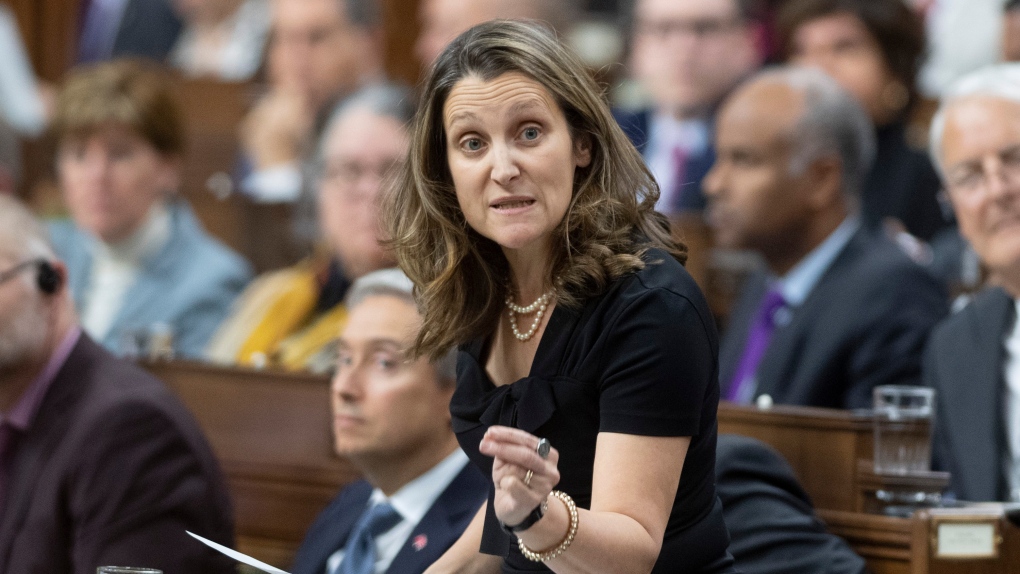 Deputy Prime Minister and Minister of Intergovernmental Affairs Chrystia Freeland responds to a question during Question Period in the House of Commons, Monday January 27, 2020 in Ottawa. THE CANADIAN PRESS/Adrian Wyld

OTTAWA -- Deputy Prime Minister Chrystia Freeland, who presided over the talks that led to a new North American free trade deal, urged the opposition parties to get on with enshrining the revamped pact into law in order to provide certainty after years of turmoil.

Freeland kicked off debate on a bill to implement the new deal by saying it was time for Canada to join the U.S. and Mexico by ratifying the deal.

The "new NAFTA" preserves the core of the existing North American Free Trade Agreement while improving parts of it that affect numerous Canadian industries, Freeland said.

The legislative path the deal must follow will see it debated in the House of Commons and Senate, and in their committees, and while Freeland suggested that process has its merits, she stressed the need to move quickly.

"It is in the national interest for us to finish this process, to put this process behind us, to have the economic and political certainty that ratification will bring," Freeland said Thursday outside the House.

"But I am far from thinking that the debate we're hearing in the House now, the discussions we'll hear in committee, are pointless."

Despite the Opposition Conservatives signalling they were willing to support the agreement, despite holding their noses, Freeland said she will not take any votes for granted.

The United States and Mexico have already ratified the agreement and U.S. President Donald Trump held a signing ceremony at the White House Wednesday. The Canadian implementation bill was introduced in the House of Commons later that day, with only the Bloc Quebecois voting against a motion to make way for the legislation.

A host of industry groups and premiers have come out asking MPs and senators to support the bill without delay.

It has been more than two years since Trump demanded the three-country deal be revised. The 13-months of negotiations placed a strain on the relationship between Canada and the U.S. as the Trump administration took what Freeland described as unconventional bargaining positions and enacted punitive tariffs.

"Canadians have come a long way since 2017, when Canada's most important trading relationship, indeed our national prosperity itself, was put at serious risk," she said during her speech to begin the debate in the House.

The Saskatchewan MP praised the cross-partisan "Team Canada" approach to negotiating a new deal and thanked Freeland for involving other parties.

"I think the reality is the president and Mexico sat down and did a deal and they came back to Canada and said 'Here you go, take it or leave it.' And that's disappointing. It didn't have to be that way."

The deal needs close scrutiny and effort to mitigate any problems it creates, Hoback said.

But he signalled that at the end of that, the Conservatives expect the United States-Mexico-Canada Agreement to be approved. The Liberals will need the backing of at least one other official party to pass the legislation in the Commons.

"Our party supports, and wants a free-trade deal with Canada, the U.S. and Mexico," Hoback said. "Some things are just too big to play politics with."

If the bill receives parliamentary approval, the three parties to the agreement will take several months to develop regulations to interpret the pact's provisions before rules finally take hold.

Prime Minister Justin Trudeau is expected to talk about the agreement at an event in the Toronto area this afternoon.

This report by The Canadian Press was first published Jan. 30, 2020