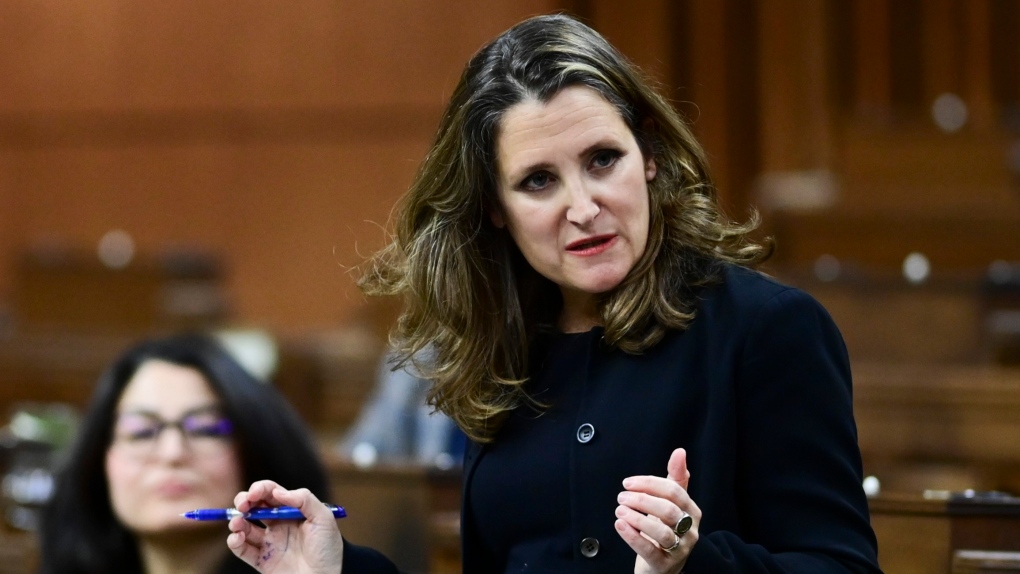 Minister of Finance Chrystia Freeland resends to a question after delivering the 2020 fiscal update in the House of Commons on Parliament Hill in Ottawa on Monday, Nov. 30, 2020. THE CANADIAN PRESS/Sean Kilpatrick

OTTAWA -- The Liberals have officially started the clock toward a key vote that will determine the fate of billions of dollars in new pandemic-related aid -- and the minority government.

The federal government introduced a bill in the House of Commons Wednesday that would enact spending measures proposed in this week's fall economic statement.

The Liberals will make passage of the legislation a confidence vote, meaning the minority government could fall and trigger an election if it doesn't garner the necessary support.

Conservative finance critic Pierre Poilievre said his party would carefully read the bill to make sure it does what the government claims.

The first payment is supposed to happen right after the bill passes, but the government is only suggesting it needs to introduce the legislation, not pass it, before MPs go on a winter break, Poilievre said.

"The government needs to tell us how it plans to make that payment if it doesn't have the legislation passed," he said after a morning caucus meeting.

The economic statement also noted the deficit was on track to hit $381.6 billion this fiscal year, but warned the figure could close in on $400 billion if public health restrictions are extended or expanded in the coming weeks.

The federal debt is set to push past $1.2 trillion, with more on the way in the coming years before accounting for the government's proposed three-year stimulus fund the Liberals say will be between $70 billion and $100 billion.

Credit rating agency DBRS Morningstar, in an analysis Wednesday, said the cost of extra spending and debt could be worth it to avoid long-term scarring to the economy, which could take the form of people permanently out of jobs and more businesses closing for good.

The agency added that the government will have to "recalibrate public finances" to keep deficits from becoming permanent.

That won't be easy with a long list of policy promises, the agency said, pointing to a national child-care system, reform of the employment insurance system, green infrastructure spending and demands from provinces for increased health-care transfers.

"Given the medium-term fiscal outlook, there is limited space to fund sizable increases in permanent spending in a sustainable way without also raising revenues," the report said.

"The government will face difficult fiscal (and political) choices as it prepares the 2021 Budget."

A majority of MPs in the House of Commons on Wednesday backed a Bloc Quebecois motion that called on the federal government to increase its share of health-care spending before the end of the year.

The vote isn't binding on the government.