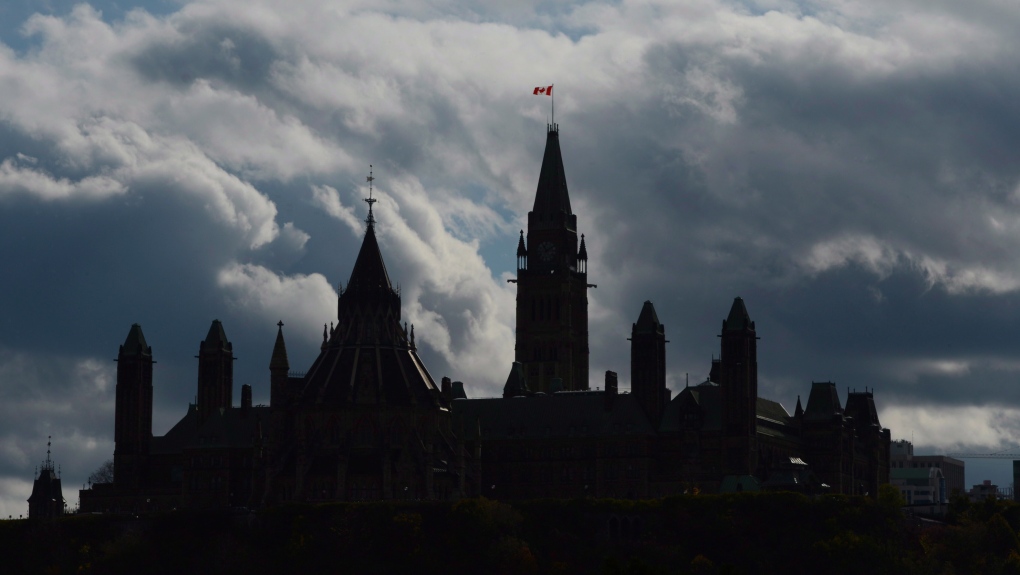 Clouds form a backdrop for the buildings on Parliament Hill in Ottawa on Tuesday, Oct. 22, 2013. (Sean Kilpatrick / THE CANADIAN PRESS)

OTTAWA -- The latest Conservative omnibus bill weighs in at 359 pages and alters everything from the food and rail safety regimes to the Judges Act, the National Defence Act and the handling of temporary foreign workers.

In all, almost 40 different pieces of legislation are being altered by the single bill tabled Friday.

The government says it is designed to enact measures in last month's federal budget, and has christened the effort the "Harper Government Creating Jobs & Growth While Returning to Balanced Budgets With Economic Action Plan 2014 Act, No. 1."

The official Opposition NDP simply calls it a "monster."

The legislation, as budget implementation bills are supposed to do, puts in place the legislative machinery to make good on a number of budgetary measures.

These include benefits such as a tax credit for search and rescue volunteers, an increase in eligible adoption expenses for tax purposes, raising tobacco taxes and eliminating the need for individual tax filers to claim a GST tax rebate -- which will now be calculated automatically by the Canada Revenue Agency.

"Under the leadership of Prime Minister Stephen Harper, our government has never strayed from our commitment to strengthen the economy for all Canadians, and never wavered from seeing our plan through," Finance Minister Joe Oliver said in a release.

But, as has become routine with the Harper government, the latest budget bill is stuffed as well with measures that traditionally have little to do with the financial accounts of the country.

"I think there are over 300 pages, 30 sections, all sorts of disparate things -- food safety, rail safety, judges, even military ranks -- that have nothing to do with the budget," complained Liberal critic John McCallum.

In fact, the finance minister's office asserts that the budget delivered last month before then-finance minister Jim Flaherty resigned from cabinet does include some reference to every element laid out in his successor's first implementation bill.

The bill includes provisions to impose fines against companies that abuse the temporary foreign workers program.

It has more than 50 pages of changes to the Trademarks Act.

It harmonizes hazardous goods rules with the United States, precludes three senators from the parliamentary pension plan while under suspension and even gives cabinet a say on regulations regarding fresh fruits and vegetables.

NDP finance critic Nathan Cullen could not contain his exasperation, noting there are actually items in the bill his party supports -- such as a reversal on imposing GST on hospital parking and some of the targeted tax credits.

It's all that other stuff unrelated to budgetary finances that drives opposition MPs wild.

"Our past experience has taught us that the devil lies in the details," he said.

Harper himself, as a young opposition MP, once eloquently critiqued Liberal omnibus legislation because of the dilemma it posed for parliamentarians trying to do their job responsibly.

As the young Harper implored in 1995, "In the interest of democracy I ask: How can members represent their constituents on these various areas when they are forced to vote in a block on such legislation and on such concerns?"

"We can agree with some of the measures but oppose others. How do we express our views and the views of our constituents when the matters are so diverse?"

The Liberal omnibus bill that drew Harper's ire in 1995 was 21 pages in length and altered 11 existing pieces of legislation.

In recent years, the Conservatives have used omnibus budget bills to alter everything from the Environmental Assessment Act to the Fisheries Act and the immigration law.

The most recent one was rushed through the Commons in October, and included a measure that changed how Supreme Court justices are appointed. The top court responded last week that such a change required a constitutional amendment, and was thus beyond Parliament's power.

The bill tabled Friday includes an entirely new piece of legislation -- a controversial bill that requires Canadian banks to report the financial holdings of dual Canadian-U.S. citizens, with the information ultimately going to the American tax man.

The U.S. Foreign Account Tax Compliance Act raises significant privacy concerns for as many as one million Canadians and may face a court challenge.

That's just one clear example of a legislative change in the budget bill that should be in stand-alone legislation for parliamentarians to properly debate, Cullen said.