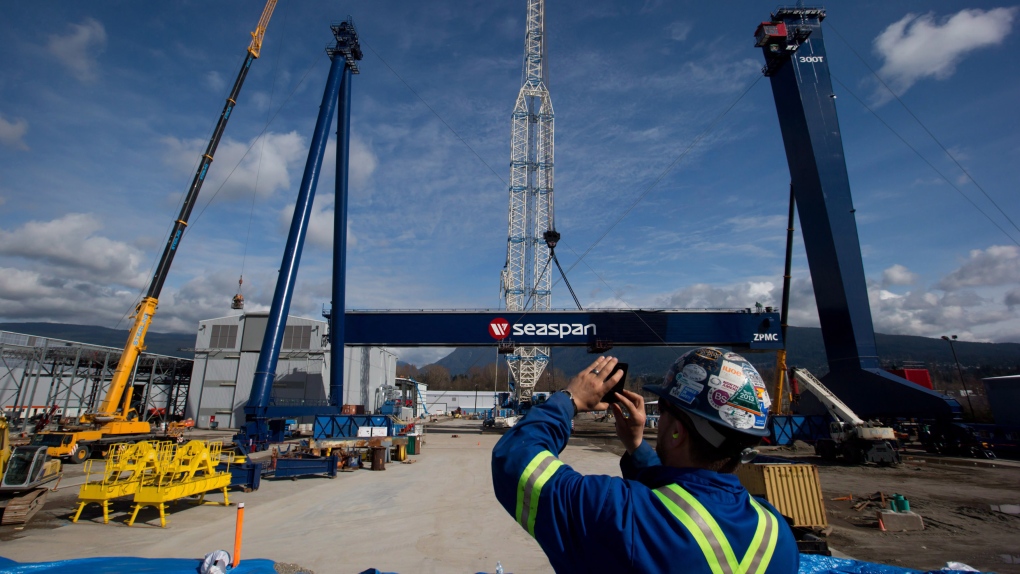 A worker takes a photo as the main girder of a new 300-tonne gantry crane is lifted into place at Seaspan Vancouver Shipyards in North Vancouver, B.C., on Wednesday, April 2, 2014. (THE CANADIAN PRESS/Darryl Dyck)

OTTAWA -- The cutting of steel for the navy's long overdue support ships will begin next month in Vancouver, even though the federal government doesn't know how much the two vessels will ultimately cost.

Federal procurement minister Carla Qualtrough confirmed plans for an early start to work on the supply ships during a breakfast address Thursday at the Cansec defence show in Ottawa.

Seaspan Shipyards will receive $66 million to work on several dozen components of the so-called joint support ships during a lull in the building of two other Canadian Coast Guard vessels.

The government is hoping that advance work will shave about a year off the expected delivery time for the first support vessel, which is currently slated to hit the water in 2023.

It will also ensure Seaspan continues to have work for its employees during what would otherwise be a dead zone between construction of the last of three coast guard fisheries vessels and a new coast guard ocean science ship.

"These support ships will deliver fuel and other vital supplies to vessels at sea," Qualtrough said, "ensuring our women and men of the Canadian Armed Forces are able to carry out their missions for decades to come."

The navy has been without a permanent support ship since retiring its last two in 2015 because of an unexpected fire and excessive corrosion, and is currently relying on a converted civilian vessel to fill the gap.

The first new vessel was originally supposed to be delivered in 2019, but the project has been plagued with delays.

Even as work is set to begin, however, Qualtrough conceded later that the government still doesn't have a concrete estimate of how much the two joint support ships are going to cost.

"It's too early to speculate on what the (support ships) will ultimately cost," she said.

The previous Conservative government set a budget of $2.3 billion for the vessels back in 2011, but that number has been under review for nearly two years.

The parliamentary budget office pegged the full cost of two support ships back in 2013 at $4.13 billion, while the government's new defence investment plan, released this week, said it could cost up to $4.99 billion.

"There are a lot of things happening on (the support ships)," said Andre Fillion, head of military procurement at Public Services and Procurement Canada.

"The acquisition of long lead items, the start of the (early work) and also a lot of engineering work."

Seaspan vice-president Tim Page told The Canadian Press that the shipbuilder is in negotiations with the government, but remains committed to delivering the support ships to the navy.

Starting work early is a reasonable solution to what would otherwise be a troublesome lull in work at Seaspan, said defence analyst David Perry of the Canadian Global Affairs Institute.

But the government still doesn't have an approved design for the support ships, he said, and the whole point of the federal government's multibillion-dollar shipbuilding strategy was to prevent such production gaps.

"It's a solution to an immediate problem," Perry said, "but it's not by any means an ideal scenario."