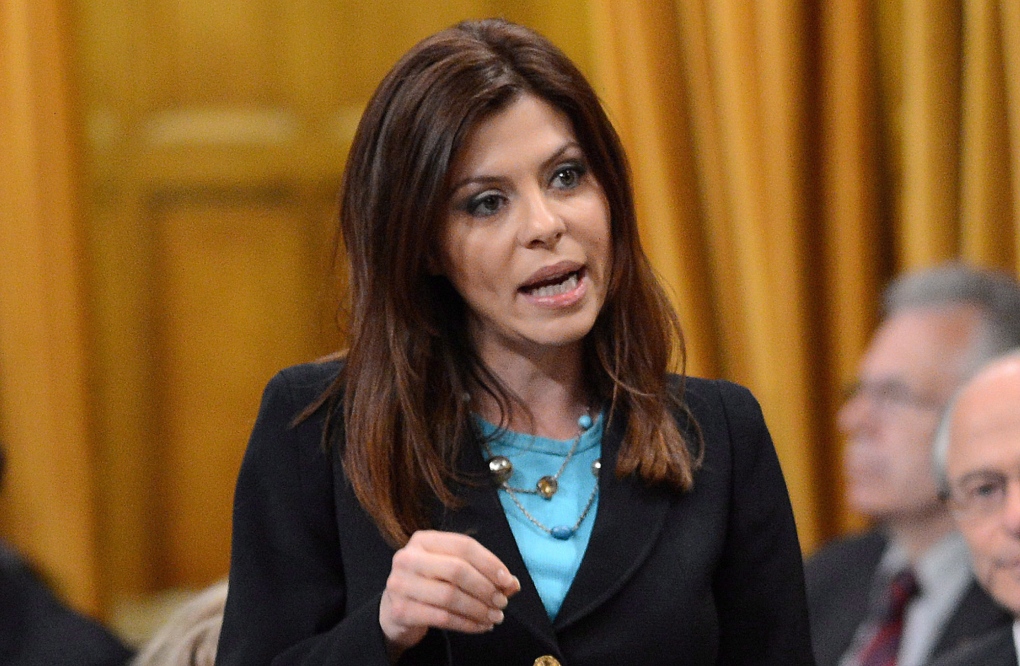 Conservative MP Eve Adams responds to a question during question period in the House of Commons on Parliament Hill in Ottawa on Tuesday, June 11, 2013. (Sean Kilpatrick / THE CANADIAN PRESS)

OTTAWA -- The Tory MP, her boyfriend at Conservative HQ, and the battle for a coveted Toronto-area riding -- it's a combination that's causing friction and recriminations in Conservative circles.

The controversy centres on the party's promise to hold open nominations across the country leading up to the 2015 federal election, after years of protecting incumbent MPs.

Some grassroots members in Ontario are appealing to the party brass to address what they perceive as favouritism and interference by Dimitri Soudas, the party's executive director.

Soudas' partner, MP Eve Adams, is running for the nomination in the new riding of Oakville-North Burlington. Last year, the couple moved away from Mississauga-Brampton South, which she currently represents.

Tempers flared when Adams showed up at a riding board meeting Mar. 19, and was asked to leave after an unpleasant exchange. Two separate Conservative sources said one board member threatened to call the police when she stayed on.

Soudas was waiting for her in an adjacent hallway to pick her up. Adams has been recovering from a concussion from a fall last month in Ottawa.

"Everybody on the board is shocked at what is going on, and are hoping that our national council who are ultimately in charge of both the executive director and the nomination process, that they're going to do the right thing and rectify things," said John Mykytyshyn, a riding board member.

A majority of the riding association backs prospective candidate and local chiropractor Natalia Lishchyna, including Mykytyshyn.

"People would be intimidated. These are just regular people who feel a civil duty to be involved."

But Adams says the incident has been grossly exaggerated by Lishcyhyna supporters, and specifically Mykytyshyn, who have an interest in casting a pall over her candidacy.

"This person is hoping to tarnish both myself and the person I'm with in an effort to attract attention to himself and his campaign," Adams said in an interview.

Last fall, Soudas made an unsuccessful attempt to get on the board of the Oakville-North Burlington association. When he was later hired on as executive director, he made a commitment to the party that he would not have anything to do with the nomination, nor would anyone who worked directly for him.

Conservative insiders insist that the party has taken great pains, with months of pre-planning, to ensure a genuinely open nomination process across the country.

But in an email to Conservative headquarters, longtime party organizer Wally Butts expressed frustration with the situation in Oakville-North Burlington.

"When this situation originally arose, it was made clear to me that Dimitri would not be involved, and Eve was to be treated just like any other candidate seeking nomination as a candidate," Butts wrote on Mar. 20.

Two Conservative party sources say that Butts's departure was not related to his letter, but part of a reorganization of staff that is happening across the country.

Butts declined to comment, saying in an email that "the issue is now between lawyers."

Butts's departure sent tongues wagging in surrounding ridings. One Hamilton-area riding association president penned an open letter saying Soudas had "let the bedroom get in the way of the boardroom."

"When HQ plays games in our local nominations process it significantly impacts our ability to win ridings in the next election," wrote Ken Audziss, who had worked for Adams in the past at Mississauga City Hall.