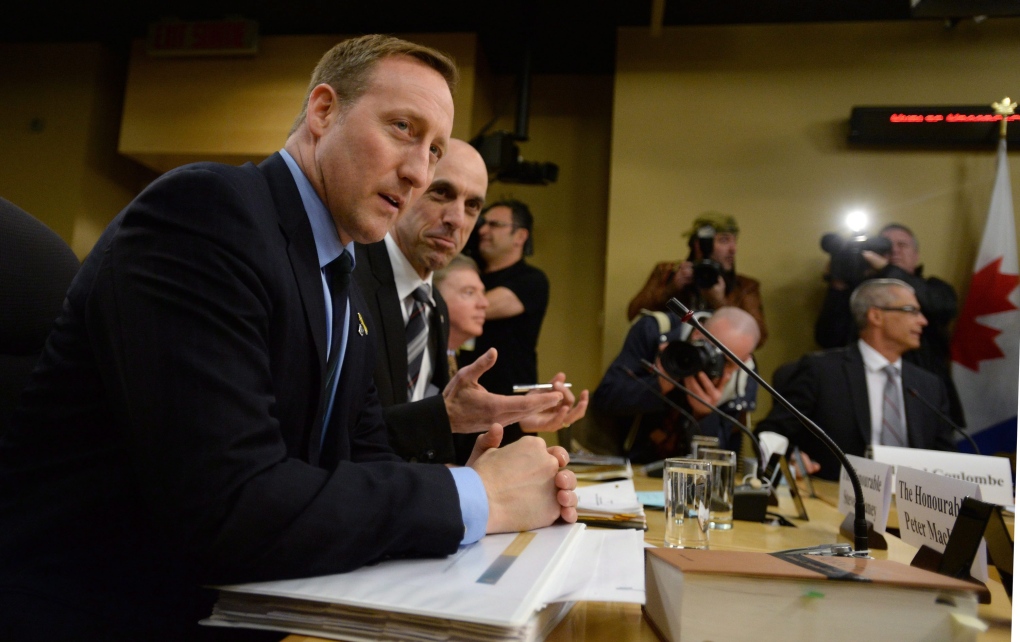 Steven Blaney, Minister of Public Safety and Emergency Preparedness, and Peter MacKay, Minister of Justice, appear before a committee on Bill C-51 in Ottawa on Monday, March 30, 2015. (Sean Kilpatrick / THE CANADIAN PRESS)

OTTAWA -- The Conservatives used their majority on the House of Commons public safety committee to vote down the first wave of opposition amendments to the federal anti-terrorism bill.

Government MPs also won approval for a few changes they put forward Tuesday with the aim of clarifying some elements of the legislation.

But after more than six hours of clause-by-clause review, it was clear the government was not about to waver on core elements of the 62-page security bill.

The bill would give the Canadian Security Intelligence Service more power to thwart suspected terrorist plots -- not just gather information about them.

It would also increase the exchange of federal security information, broaden no-fly list powers and create a new criminal offence of encouraging someone to carry out a terrorism attack.

In addition, the bill would make it easier for the RCMP to obtain a peace bond to restrict the movements of suspects and extend the amount of time they can be kept in preventative detention.

Public Safety Minister Steven Blaney says the legislation is needed to keep Canadians safe from jihadi-inspired attacks like the ones that claimed the lives of two soldiers in attacks just days apart last October.

"These are terrorists who are threatening us, and we will fight them," Blaney said during question period Tuesday.

At committee, opposition MPs from four parties put forward dozens of suggested changes, but they were summarily defeated.

The committee heard from almost 50 witnesses -- many of whom suggested changes to the bill -- in recent weeks.

Civil libertarians and privacy advocates have denounced the bill as a threat to the freedoms of ordinary Canadians.

However, the government MPs on the committee steadfastly defended the legislation Tuesday.

The rejected amendments included a built-in expiry clause for new provisions, a stronger no-fly list appeal process and a requirement that the privacy commissioner report annually to the public safety minister on the expanded information-sharing powers.

Roxanne James, parliamentary secretary to Blaney, took particular exception to the notion of a sunset clause, expressing amazement anyone would even suggest it.

"I couldn't believe it," she told the MPs.

A proposed amendment from Liberal public safety critic Wayne Easter to improve oversight -- through the creation of a national security committee of parliamentarians -- was ruled out of order because it would involve funds from the federal treasury, making it ineligible for consideration.

Green party Leader Elizabeth May tried to amend the proposed new offence of encouraging an act of terrorism so that it clearly excludes private conversations.

May said that, as drafted, the provision could limit free speech and even dissuade someone from engaging in a discussion with an extremist to try to deradicalize them. "That's what bad drafting and rushed legislation will do -- it will make us less safe."

The NDP and Green party plan to vote against the bill. The Liberals, while proposing changes, intend to support it.

The Conservatives did agree to make it clear that the information-sharing provisions would not target protesters who act outside the letter of the law, as well as limit the ability to further distribute material beyond federal circles.

It also approved wording that would narrow the public safety minister's powers with regard to air carriers.