The Conservative Party of Canada has opened up a "statistically significant" lead over the governing Liberals, the latest polling from Nanos Research shows.

"But the key takeaway here is that the Conservatives are opening up a lead that is statistically significant. It's outside of the margin of error," pollster Nik Nanos said Wednesday on the Trend Line podcast.

Nanos said he has not seen numbers like these for the Conservatives since Erin O'Toole was leader of the party.

The Conservatives are currently in the process of choosing a new leader, with the deadline to submit the required $300,000 registration fee and 500 party member signatures set for this Friday.

Nano said parties without leaders can become more popular than those with leaders, since there is no one at the helm for Canadians to be "repulsed by."

Last month, both parties agreed to enter into an arrangement that would see the NDP support the minority Liberals until 2025, in exchange for agreeing to prioritize certain policy issues such as dental care and housing.

Nanos said while it is understandable that the Liberals would want to ensure their budgets are not defeated, it likely comes with a political trade-off.

And if an election was held today, he said there is a good chance the Conservatives could win government.

"Maybe one of the takeaways here is that although the Liberal-New Democrat arrangement, parliamentary arrangement, provides for stability, I think Canadians woke up and go, 'Hold on a second. Does that mean we're going to have this for until 2025?' Perhaps some Canadians aren't happy and looking at the Conservatives as an alternative."

The polling is based on 1,084 random phone interviews with Canadians 18 and older, ending April 22. The data is based on a four-week rolling average where the oldest group of 250 interviews is dropped each week and a new group of 250 is added. The results are accurate within 2.9 percentage points, 19 times out of 20.

With files from CTVNews.ca Producer Sarah Turnbull and The Canadian Press 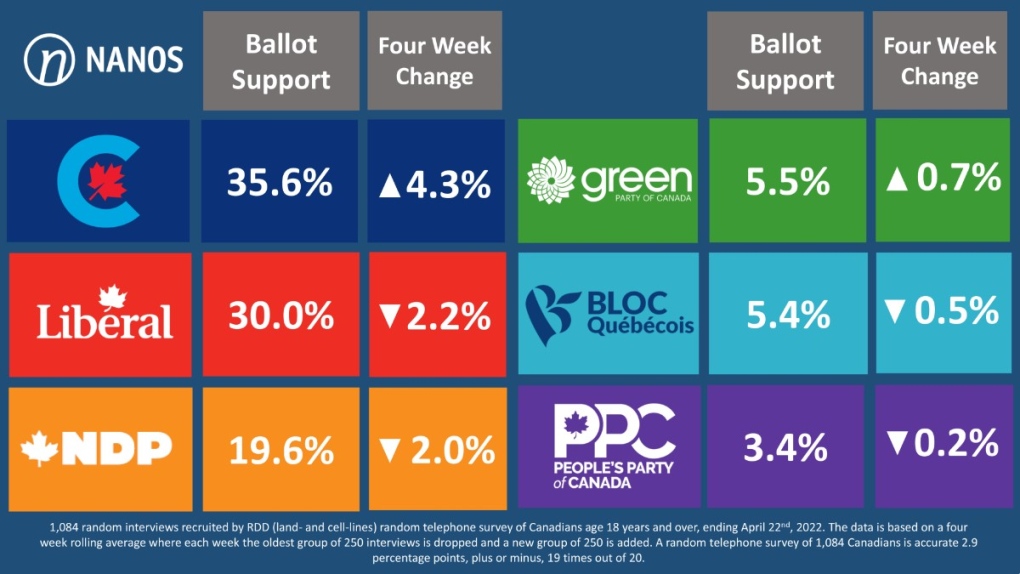 The latest poll numbers from Nanos Research show the Conservatives leading the Liberals, as of April 22, 2022. (Nanos)