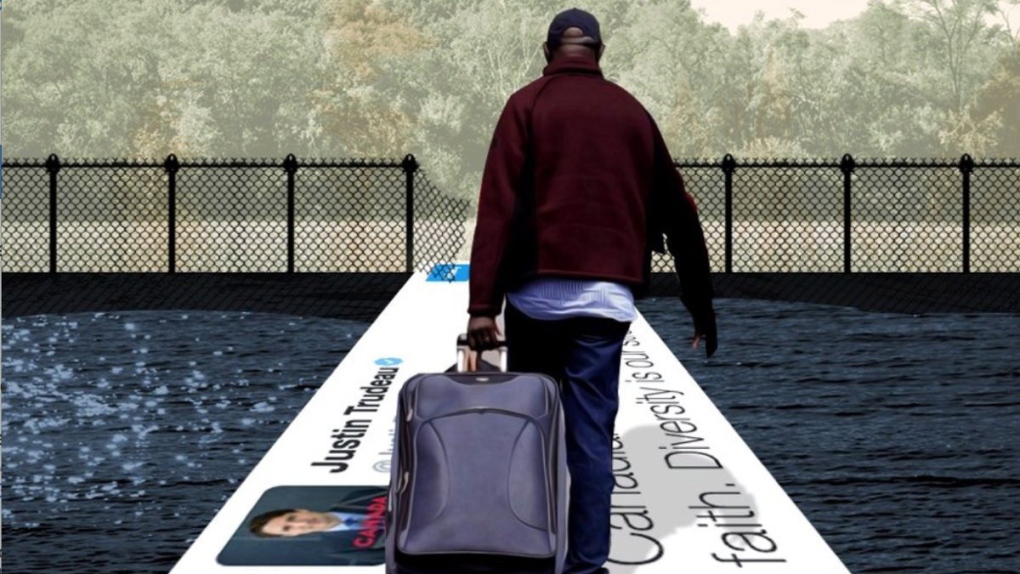 The Conservative party pulled this attack ad from its Twitter feed Tuesday that depicted a black man carrying a suitcase walking over a tweet from Prime Minister Justin Trudeau. (THE CANADIAN PRESS/HO-Twitter, @CPC_HQ via @journo_dale)

OTTAWA -- The Conservative party pulled an attack ad from its Twitter feed Tuesday that depicted a black man carrying a suitcase walking over a tweet from Prime Minister Justin Trudeau.

The tweet is rolled out as a carpet entering a broken fence and the words "faith" and "diversity" are visible.

The Tories have argued that a Trudeau tweet from January 2017 is partly to blame for the influx of asylum seekers crossing into Canada from the United States.

Conservative party spokesman Cory Hann says the ad was axed because the situation at the border is not about any one group of people.

Hann says the image, which shows an actual person "illegally" crossing over the Canadian border, was originally used by a number of media outlets with stories about the surge in asylum seekers.

The full photo shows the man with a group of people carrying suitcases in Quebec, while the edited image used by the Conservative party singled out one man.

A quote from a story in the Financial Post is superimposed on the image which says, "Trudeau's holier-than-thou tweet causes migrant crisis -- now he needs to fix what he started."

In an opinion piece published Tuesday, Immigration Minister Ahmed Hussen accused the Tories of "peddling false information to stoke fear" and called it "ridiculous" that they blame the flow of asylum seekers on Trudeau's tweet.