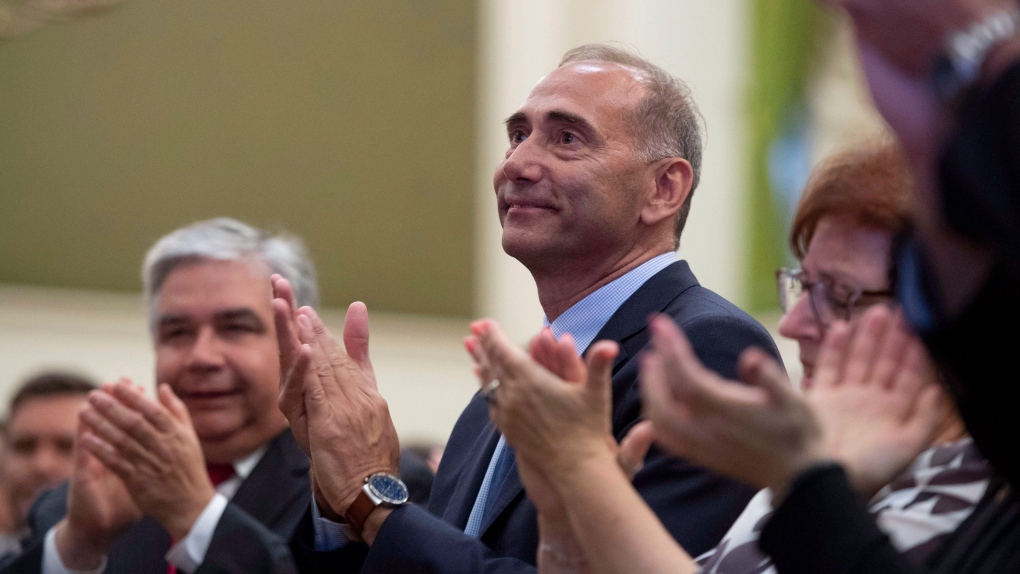 Richard Martel, who won the federal by-election in the riding of Chicoutimi-Le Fjord, attends the Conservative caucus meeting on Parliament Hill in Ottawa on Wednesday, June 20, 2018. THE CANADIAN PRESS/Justin Tang

OTTAWA -- Conservative Leader Andrew Scheer welcomed the newest member of his caucus on Wednesday, saying Richard Martel's byelection victory on Monday is a harbinger of things to come.

Martel, who won the Quebec riding of Chicoutimi-Le Fjord, joined a caucus meeting, where he was presented with a personalized blue jersey sporting a large, white "C."

He won won 52.7 per cent of the vote, more than 5,000 votes ahead of Liberal Lina Boivin, who took 29. 5 per cent. The NDP and Bloc Quebecois candidates captured just 8.7 per cent and 5.6 per cent respectively, while the Green candidate collected 3.1 per cent.

"We've shown Canadians that, when we have a strong message and when we stick to our principles, Conservatives can win anywhere," Scheer said in welcoming Martel.

The leader's comments were met with standing ovations and cheers from the caucus.

"Someone else got a clear message Monday night. That person is Justin Trudeau. The message that was sent is that Canadians are tired of his failures on so many different issues," said Scheer, pointing to the government's decisions to run deficits and buy Kinder Morgan's Trans Mountain pipeline, as examples.

Scheer said Trudeau has left Canada unprepared to deal with the threat of a major trade dispute with the United States.

"President Donald Trump has made it very clear he wants to move Canadian jobs to the United States. There's no reason why Justin Trudeau should be helping him."

Martel told caucus he's proud to join them in the House of Commons and thanked Scheer for his support during the campaign.

The byelection was triggered by the resignation of rookie Liberal MP Denis Lemieux. Chicoutimi-Le Fjord marks the governing party's first byelection defeat in a Liberal-held riding since Trudeau became leader in 2013.