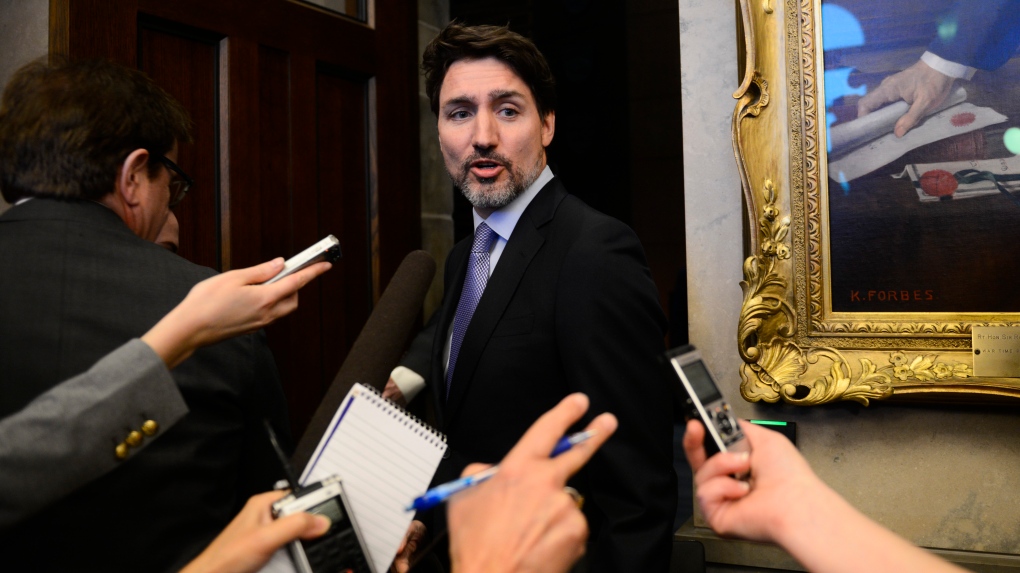 Prime Minister Justin Trudeau makes his way through the foyer of the House of Commons as he arrives to question period on Parliament Hill in Ottawa on Monday Feb. 24, 2020. THE CANADIAN PRESS/Sean Kilpatrick

OTTAWA -- The Conservatives are pushing to revive a request for a committee probe of Ethics Commissioner Mario Dion's report that found that Prime Minister Justin Trudeau broke the federal Conflict of Interest Act in relation to the SNC-Lavalin scandal.

On Wednesday, the Tories put forward a motion at the House Ethics Committee, seeking to have the "Trudeau II Report" studied, calling on Dion to appear and testify for two hours on his findings, and requesting "other witnesses as required" be invited.

The proposal has yet to come to a vote, after debate was paused on the matter until a future meeting, but it is the second attempt from the Conservatives to revive the SNC-Lavalin scandal in this minority Parliament.

A similar motion was moved on Monday and failed, with the Bloc Quebecois and Liberals opposing the proposal. Given committees are now majority controlled by the opposition parties, the Liberals do not have the same ability to decide which studies are launched or left off the agenda as they did in their majority days, and require the support of another party to win votes.

Though, at Wednesday’s meeting the committee did agree to invite Dion to appear to discuss his mandate more broadly, and it’s likely questions on the report will arise during his appearance.

In his efforts to argue for the motion, Conservative MP Michael Barrett said that Canadians “continue to expect” a “full examination” of this issue, though Liberal MP Greg Fergus said that in his view Canadians don’t want parliamentarians “looking back in the rearview mirror.”

The attempts to study this report come nearly a year to the day of Jody Wilson-Raybould's House Justice Committee testimony in the SNC-Lavalin affair. It was during her testimony that she alleged that she faced high-level "veiled threats" and political interference in the criminal prosecution of SNC-Lavalin, leaving Trudeau facing calls to resign.

It was then several months later in August 2019, when Dion issued his damning report that found Trudeau both directly and indirectly sought to influence his once justice minister and attorney general's decision on whether to cut a deal that would see the Quebec-based construction and engineering giant avoid a criminal prosecution.

As a result—after taking months to review "troubling" evidence and relevant legal and constitutional principles, and despite some constraint from witnesses unable to provide their full evidence—Dion found Trudeau to have contravened the Conflict of Interest Act, the second time since he’s been in office.

Wilson-Raybould called the report a "vindication," as it largely sided with her version of events, which she brought forward over the course of hours of committee testimony, media interviews, and the release of documents, correspondence, and one secret audio recording.

Dion's report landed just months before the fall federal election and at the time there was a push for an emergency summer hearing that the Liberals shut down, despite the opposition saying they were informed that Dion was ready to testify.

At the time that the report was released, Trudeau said that he accepted the report’s findings, and took full responsibility for “everything that happened,” but stopped short of apologizing. Trudeau said that he disagreed with some of Dion’s conclusions, including that any contact with the then-attorney general on this issue was improper.