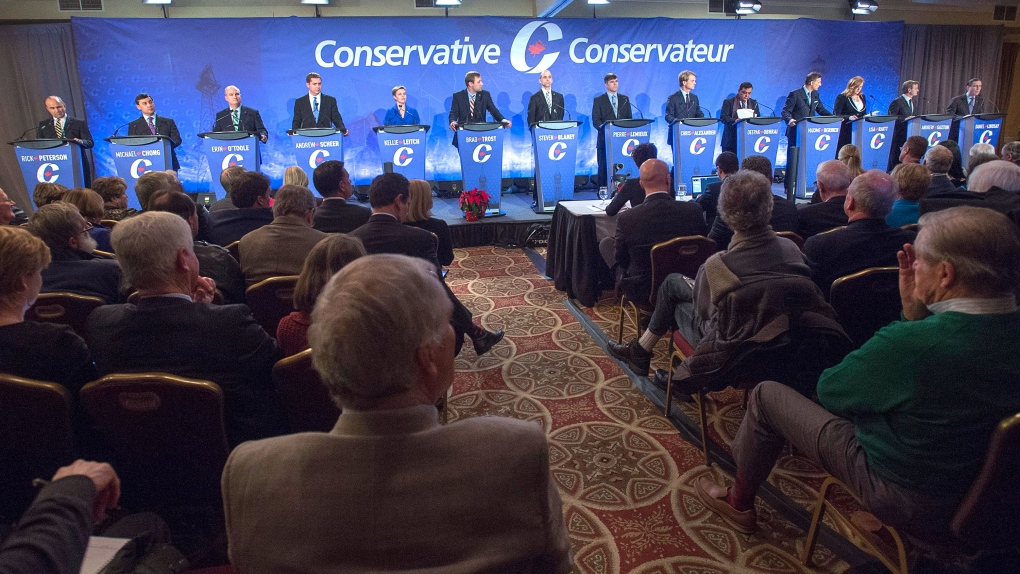 The 14 participants in the Conservative leadership candidates' bilingual debate are seen in Moncton, N.B. on Tuesday, Dec. 6, 2016. Conservatives vote for a new party leader on May 27, 2017. THE CANADIAN PRESS/Andrew Vaughan

OTTAWA -- Conservative leadership contenders Maxime Bernier and Lisa Raitt want their party to keep probing who was behind 1,351 fake memberships the party cancelled a week ago.

The Conservatives cut the memberships, which belonged to people who hadn't paid for them, after leadership candidate Kevin O'Leary accused another unnamed campaign of buying memberships for people using prepaid credit cards. Under the rules, those who join the party must pay for their own memberships.

"Whoever it is. We don't know right now."

The party determined 1,351 memberships had been purchased through its website using two different IP addresses. It also found that roughly half of the 1,233 memberships purchased using prepaid credit cards came from those IP addresses.

Raitt pointed out the cost of the cancelled memberships was roughly $20,000, which could potentially be an illegal contribution. Donors are limited to contributions up to $1,550 a year for each political party.

O'Leary's campaign didn't name a specific candidate in its allegations last Thursday, but Bernier's campaign responded the next day to accuse O'Leary of throwing mud to try to save his campaign.

Bernier says the fake memberships didn't come from his campaign.

"But I don't know if these people wanted to support me as a candidate or another person as a candidate. That's why Lisa, she's right [to ask] the party, 'tell us who is at the other end of the computer.' We don't know."

A spokesman for the Conservative Party said he didn't have anything to add to the party's statement last Friday.

"We regularly review memberships to ensure they’re within our rules, and have a variety of protective measures at our disposal to ensure that," Cory Hann wrote in an email to CTV News.

"Our leadership race is, and will continue to be, a fair contest, and we will take every necessary step to keep it that way."

Bernier and Raitt agreed any candidate who knew of a fake membership ploy within their campaign should be kicked out of the race.

"If he had knowledge of it and if he had people in his campaign who were eliciting that kind of behaviour, then I'm sorry Max, you're going to have to take the punishment because the crime is very large," Raitt said.

Bernier says his campaign is following the rules.

"She's right that if something happened in my campaign, I must be responsible."