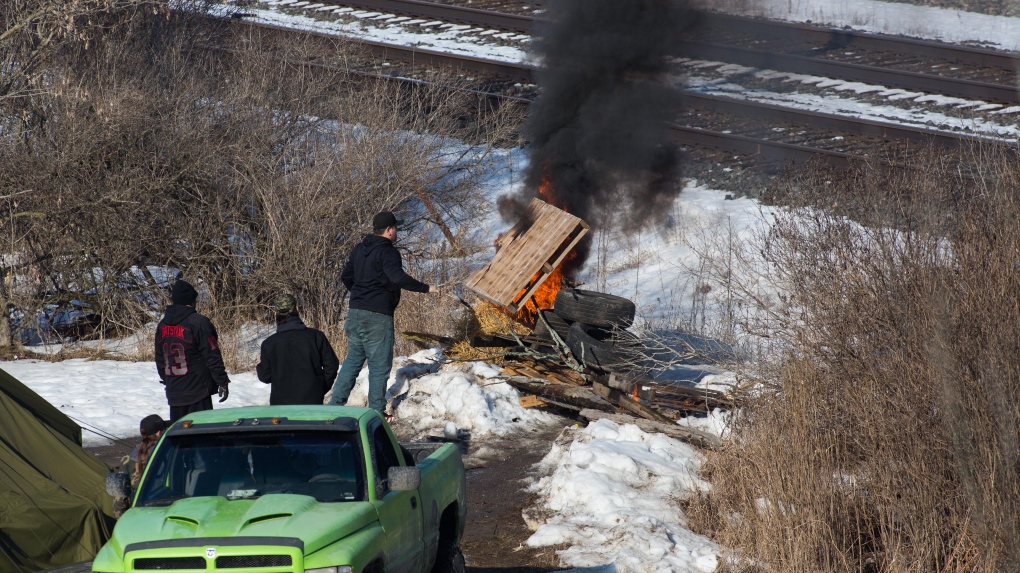 A protester throws a wooden pallet on the fire at a second rail blockade in Tyendinaga Mohawk Territory, near Belleville, Ont., on Monday Feb. 24, 2020, as they protest in solidarity with Wet'suwet'en Nation hereditary chiefs attempting to halt construction of a natural gas pipeline on their traditional territories. THE CANADIAN PRESS/Lars Hagberg

OTTAWA -- A Conservative MP is questioning whether rail blockades in Quebec and Ontario constitute acts of terrorism, which could allow the RCMP to intervene.

The meeting happened as federal Crown-Indigenous Relations Minister Carolyn Bennett travelled to British Columbia to meet Indigenous leaders at the centre of the dispute that's led to the blockades, and protesters gathered on a bridge in Kingston, Ont., that passes over a key rail line.

Shipley said he was asking on behalf of a constituent who sent him an email after a handful of protesters lit fires near and on railway tracks -- actions that were denounced Wednesday by Prime Minister Justin Trudeau.

"They asked me if I knew the definition of terrorist activity according to the Criminal Code ... This resident wanted to know if the current illegal blockades that are happening across Canada are being deemed as a terrorist activity?" Shipley asked.

Blair replied: "No they're not."

Shipley pressed Blair, leading to a pointed exchange at the committee table.

"I agree definitely with proper civil demonstrations. I'm all for that. But when we're seeing certain things like I saw yesterday with burning goods on rail lines across Canada, I thought that may have crossed a line ... what's crossing a line, Minister?" said Shipley.

"As the minister I have a responsibility to leave it to the police of jurisdiction in the exercise of their discretion to determine and investigate criminal activity. So I avoid pronouncements of and defining that activity," Blair replied.

"It's very appropriate that I be careful in doing that because I do not want to interfere with the operational independence of both the police and our prosecutors. But at the same time that was terribly unsafe, deeply concerning. I have confidence in the police to deal with it appropriately."

A meeting among the Wet'suwet'en hereditary chiefs, the federal government and the British Columbia government is set to take place later Thursday.

On Dec. 31, the B.C. Supreme Court granted Coastal GasLink an injunction calling for the removal of any obstructions including cabins and gates on any roads, bridges or work sites the company has been authorized to use.

On Feb. 6, the RCMP moved in to Wet'suwet'en territory to enforce the injunction. Hours later, outside of Belleville, Ont., east of Toronto, protesters started holding up railway traffic in solidarity with the Wet'suwet'en hereditary chiefs. The blockades have spread elsewhere in Ontario and to Quebec, and blocked train travel between Toronto, Ottawa and Montreal.

RCMP Commissioner Brenda Lucki testified that the Mounties have discretion on how to enforce an injunction.

"Mostly about the timing, and the intensity," she said. "So we can decide when and how we will enforce, even though the injunction is in place."

Lucki testified that the RCMP is committed to finding a peaceful solution.

"Of course, enforcement is the last option. It's about dialogue and trying to find a peaceful resolution to the blockades," she said.

The Ontario Provincial Police took down major Ontario blockade earlier this week. But Thursday, about 20 demonstrators gathered near train tracks in Kingston, Ont., farther east along the same line.

Const. Ash Gutheinz said train traffic had not been affected and officers were monitoring the situation.