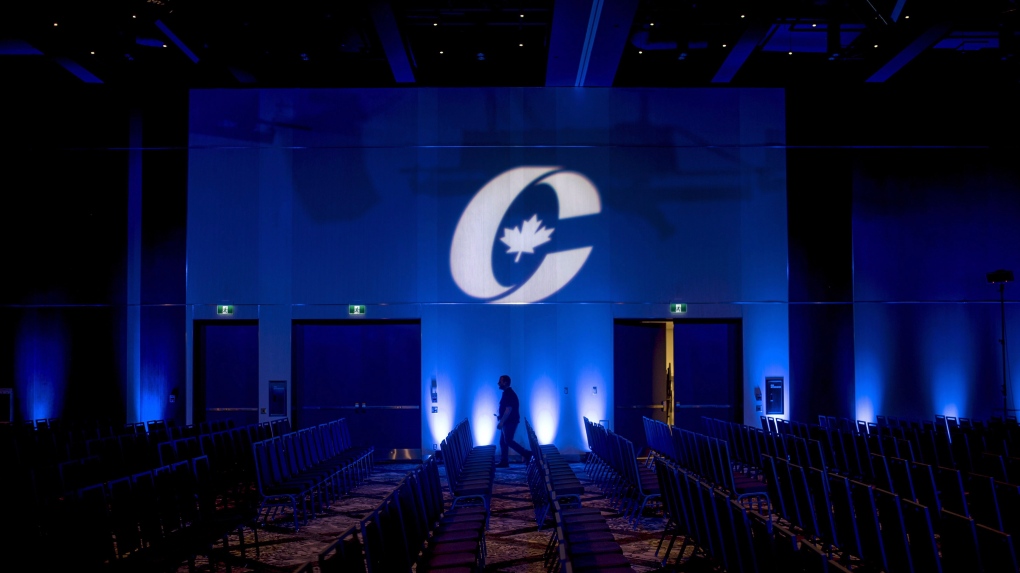 A man is silhouetted walking past a Conservative Party logo before the opening of the Party's national convention in Halifax, Thursday, Aug. 23, 2018. THE CANADIAN PRESS/Darren Calabrese

OTTAWA -- A Conservative MP has joined the chorus of voices calling for an end to COVID-19 lockdowns in Ontario.

He pointed to people being ticketed for outdoor activities, despite limited evidence transmission occurs outside; small businesses being forced to close while big box stores remain open; and what he said is a broken bargain with businesses that if they adopted sufficient COVID-19 mitigation measures they could operate but yet they keep getting shut down.

He called for more transparency in how the restrictions are devised, and suggested that COVID-19 infection and death rates be accompanied by data that provides context as to how many other life-threatening illnesses, like cancer, are being discovered at the same time.

"The priority of government efforts should focus on the protection of the vulnerable in long-term care facilities, congregate settings and establishing income supplementation programs for those with pre-existing conditions that prevent them from engaging in regular work while we await the full rollout of vaccines," he said.

Sweet is the latest Canadian politician to break ranks with the broadly united front elected officials have presented on the need for sweeping restrictions on schools, recreation, businesses and travel to slow the spread of COVID-19.

He appeared Wednesday alongside Ontario MPP Roman Baber, who was kicked out of Ontario Premier Doug Ford's Progressive Conservative caucus earlier this year for opposing lockdowns, calling them "deadlier than COVID."

But Sweet is unlikely to face a similar penalty. He was first elected in 2006 in a riding near Hamilton, Ont., and had already said he wouldn't run again.

He'd already been removed from his job as chair of the House of Commons ethics committee earlier this year after he was cleared by Conservative Leader Erin O'Toole to travel to the U.S. for essential reasons but then stayed on for an unauthorized vacation.

O'Toole said Wednesday Sweet's position is not the party line.

"After a year of the pandemic, people are frustrated and tired. Frustration is understandable but it should not lead to counterproductive behaviour," he said in a statement.

"My view and the view of the (Conservative Party of Canada) is that we respect the work being done by our premiers and health officials throughout this crisis."

That's not to say Conservatives are 100 per cent on side with the full scope of COVID-19 restrictions.

In the wake of new border measures announced in January and that went into effect in late February, two Conservative MPs penned angry letters to the prime minister calling the mandatory quarantines draconian and an overreach.

And in recent days, Conservative MPs have raised serious concerns with how those new measures, which include a mandatory hotel quarantine, are working.

Sweet wouldn't speak to the extent to which his concerns about the Ontario-specific lockdown restrictions are shared among his fellow MPs.

"My experience in politics has been you should stay on message and stay with the party line," he said.

"But when I see the consequences of the actions of not only this government but other provincial governments as well, I think it's incumbent upon me after being elected by the citizens of the riding I represent as well as swearing oath to the Queen, that I do the right thing and speak out about the great damage that this is causing many, many Ontarians."