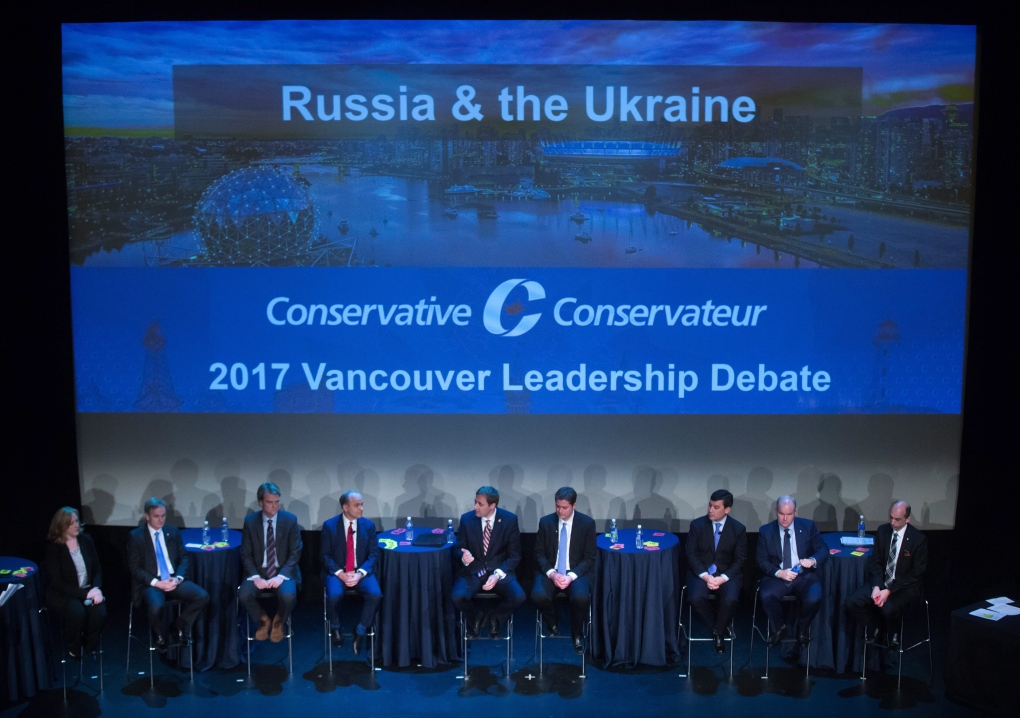 Candidates are seen on stage during a federal Conservative Party leadership debate in Vancouver, B.C., on Sunday February 19, 2017. (THE CANADIAN PRESS/Darryl Dyck)

VANCOUVER -- An unofficial Conservative leadership debate Sunday was a mostly cordial affair that only saw a few sharp exchanges, such as whether to scrap the Liberal government's proposed carbon tax.

Michael Chong drew boos from a crowd of about 250 people for defending a revenue-neutral carbon tax as the cheapest and "most conservative" strategy to lower greenhouse gas emissions, warning about the political fallout to the Conservative party of not having a viable plan to tackle climate change.

The debate was organized by a local riding association and hosted nine of the 14 people vying to lead the country's official Opposition.

Former Conservative veterans affairs minister Erin O'Toole chided Chong for his carbon-tax proposal, saying, "I'm not in this race to out-Liberal the Liberals."

Andrew Saxton added to the criticism, predicting such a tax would kill jobs and undermine the competitiveness of Canadian companies.

"As prime minister of Canada, I will axe the tax," the former British Columbia MP said to cheers from the audience.

"We have to have a harmonized plan with the United States in order to have an effective way to bring down greenhouse gases."

The Conservative party has organized five official debates, where candidates are fined for failing to show up. Vancouver's event was the second of two, unofficial, back-to-back leadership debates in B.C.'s Lower Mainland, following the previous day's rally in Langley.

Another point of contention that arose during the weekend was when O'Toole butted heads with MP Lisa Raitt over the best way to address youth unemployment. He proposed offering them a tax break.

Raitt countered with a proposal that would requiring companies to include a youth employment strategy in their business plan in order to compete for public infrastructure projects.

"If you don't have a job, you're not creating any income to actually get those tax breaks from," Raitt said. "So, let's make sure we get the jobs for people.

Drugs were another central topic during Sunday's debate. British Columbia is ground zero in Canada's opioid crisis, with more than 900 illicit overdose deaths across the province last year alone, and candidates were asked to weigh in on the situation.

Former immigration minister Chris Alexander accused the Liberal government of failing to act decisively in response to the fentanyl crisis.

"If we had this many people dying from a terrorist incident, this would be the number one issue for the government of Canada," he added.

Two official debates remain in the lead-up to May 27, when Conservatives will elect a new party leader. One will take place in Edmonton later this month and a location for the fifth has yet to be announced.