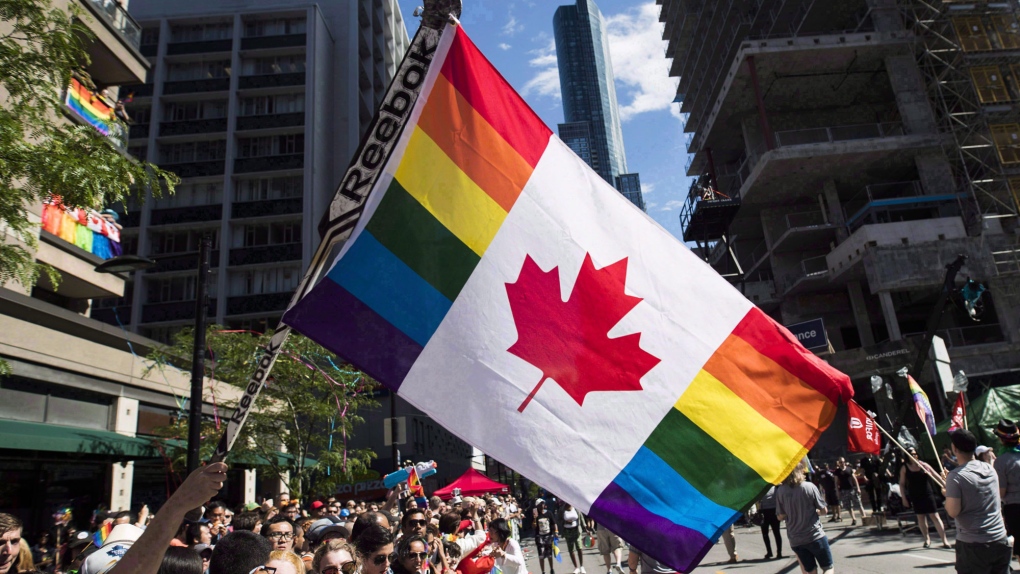 A man holds a flag on a hockey stick during the Pride parade in Toronto on June 25, 2017. THE CANADIAN PRESS/Mark Blinch

OTTAWA – Conservative Leader Andrew Scheer will not be participating in any Pride activities this year.

With the summer Pride season getting underway this month, Scheer's office has confirmed that he has "no events planned at this time."

In defence of the decision not to partake in the parades, spokesperson Daniel Schow pointed to the Conservative party's "proud history of fighting for the rights and protection of all Canadians, including those in the LGBTQ community, at home and abroad."

The Conservative party has advocated for LGBTQ rights in other countries, including advocating for increasing the number or LGBTQ refugees Canada takes in, and condemning human rights violations against LGBTQ people in countries such as Russia and Brunei.

Scheer's personal political record on supporting LGBTQ rights in Canada includes both voting against legalizing same-sex marriage in 2005, and supporting scrapping the Conservative party's definition of marriage as being between one man and one woman in 2016.

His 2017 leadership win came in large part to the support of the socially-conservative contingent of the party. Later that year Scheer delivered his party's response to Prime Minister Justin Trudeau's 2017 apology for the federal government's past treatment of members of the LGBTQ community.

In a recent policy speech Scheer stated: "I find the notion that one's race, religion, gender, or sexual orientation would make anyone in any way superior or inferior to anybody else absolutely repugnant. And if there's anyone who disagrees with that, there's the door."

His office says that there are "many ways to support these communities," and that "he will continue to stand up against hatred and discrimination in all its forms."

Over the last few years a group called LGBTory, which represents LGBTQ conservatives, has participated in Pride events in some cities across Canada.

Deputy Conservative Leader Lisa Raitt will be attending some Pride events this summer, and she has in the past as well. On CTV's Power Play she defended Scheer's decision to skip these celebrations.

"There's going to be lots of our members who are going to go to parades in their communities and that's what they choose to do. Andrew's not going but it has nothing to do with whether or not he's going to stand up for the human rights of all humans," Raitt said.

Trudeau will continue to show up at Pride festivities over this pre-election summer.

"We believe it is always important to stand with and celebrate the LGBTQ2 community, and the Prime Minister is looking forward to participating in Pride parades over the course of the summer. By refusing to attend Pride events, Andrew Scheer is showing his true colours and is turning his back on the LGBTQ2 community," said PMO spokesperson Matt Pascuzzo.

"Pride is a celebration of millions of Canadians, a commitment to advancing rights, and a reminder that we need to take further steps to achieve true equality… it is clear that Andrew Scheer and the Conservative Party of Canada are stuck in the past," he said in a statement.

Out NDP MP Randall Garrison said he thinks all leaders should participate in Pride.

May's office said she will “of course” be taking part in Pride events this summer, including in Toronto, Vancouver, Victoria, Halifax, Montreal, and in the Pride parade on Salt Spring Island.

Bernier's spokesperson said he has no plans to participate in Pride events but that his summer agenda is still being worked on.