OTTAWA -- Continued Conservative infighting over whether Erin O’Toole should continue leading the party is a signal to voters that the Official Opposition is “not ready to govern,” says Nanos Research's Nik Nanos.

“If the narrative continues that the Conservatives are divided, they don't have any chance of forming for example a majority government, or even a government… Because if a party does not support its leader or a party is divided, it basically is a big signal to average voters that that party is not ready to govern,” Nanos said in the latest episode of CTV News’ podcast Trend Line.

“So if the Conservatives want any chance of getting rid of the Liberals, they have to unify and have one message,” Nanos said, suggesting that Conservative insiders who “have their sights firmly set on each other,” should “decide who their enemy is.”

“There's a fight for the heart and soul of the Conservative Party right now,” Nanos said of the latest divisions being exposed by ousted Conservative Sen. Denise Batters’ petition calling for an expedited membership vote on the direction of the party. “It's actually a full on assault on the leadership of Erin O'Toole.”

The latest question of O’Toole’s leadership comes as new polling data indicates that the percentage of Canadians who view O’Toole as their preferred prime minister has taken a post-campaign hit, dropping the most of all party leaders since the federal election.

The latest preferred prime minister rankings show that O’Toole is tied with NDP Leader Jagmeet Singh with 20.7 per cent of those surveyed saying they would be their top pick to lead the country. Support for O’Toole has dropped 6.8 per cent since the 2021 election, while Singh’s is down 0.9 per cent. 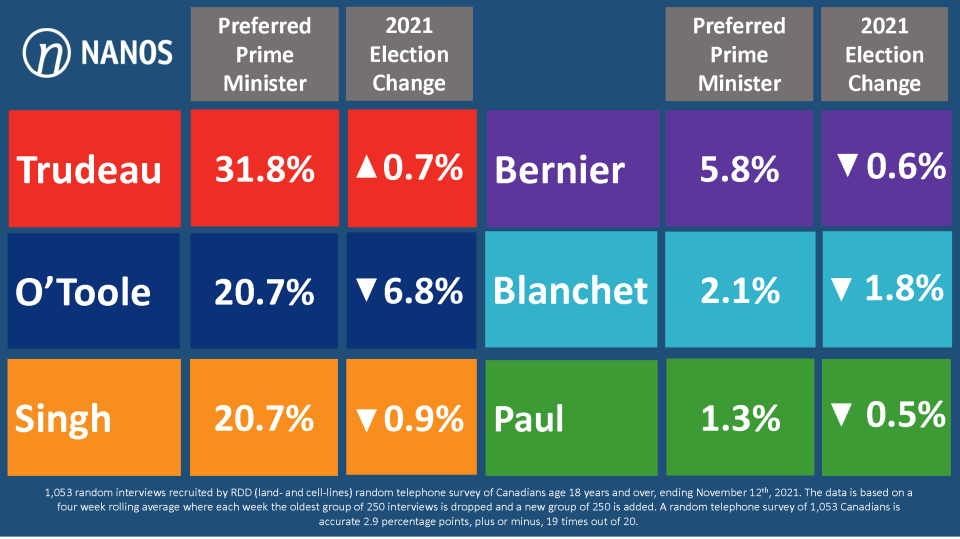