Compensation talks for victims of downed jetliner to start in October: Iran 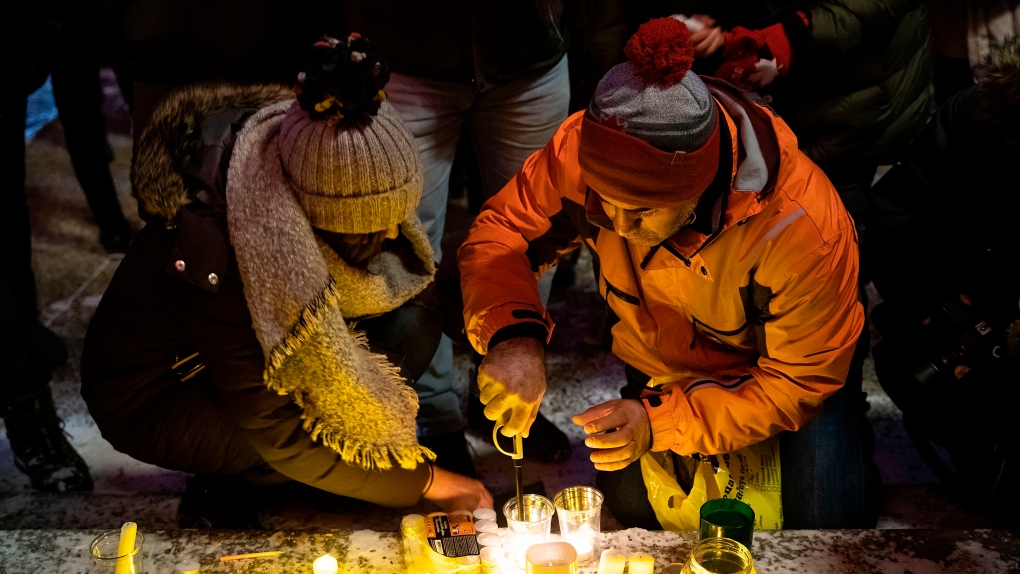 Mourners place candles and photographs during a vigil for those who were among the 176 people who were killed when Ukraine International Airlines Flight PS752 crashed after takeoff near Tehran, Iran, outside the Alberta Legislature Building in Edmonton on Wednesday, Jan. 8, 2020. THE CANADIAN PRESS/Codie McLachlan

OTTAWA -- The head of Iran's civil aviation organization says his government will launch compensation talks in October with Canada and other countries that lost citizens when the Iranian military shot down a civilian jetliner earlier this year.

Touraj Dehqani Zangeneh made the comments to Iran's official news agency over the weekend amid new Iranian claims about the circumstances surrounding the downing of Ukraine International Airlines Flight PS752 on Jan. 8.

Speaking to the Islamic Republic News Agency, Dehqani Zangeneh said the Iranian government was prepared to fully compensate the families of the 176 people killed in the crash, which included 55 Canadians and 30 permanent residents.

Iran initially denied responsibility before admitting, in the face of mounting evidence and international pressure, that the plane -- which was on the first leg of a flight from Iran to Canada via Ukraine -- went down after being hit by two Iranian missiles.

"What is evident is that Iran has accepted the responsibility for its mistake and therefore the country is ready for negotiations on paying full compensation for what (it has) done," Dehqani Zangeneh was quoted as saying to IRNA.

Canada, along with the other countries that lost citizens on Flight PS752 -- Britain, Sweden, Afghanistan and Ukraine -- signed an agreement July 2 promising to work together to force Iran to pay compensation to the victims' families.

News of the planned compensation talks came as the Civil Aviation Organization of Iran published a report on Sunday about the data downloaded from the Boeing 737's flight and voice recorders.

The so-called black boxes have emerged as a focal point in efforts to fully understand the circumstances surrounding the downing of Flight PS752, with Iran dragging its feet for months before finally transferring them to France for downloading last month.

The recorders had only 19 seconds of conversation after the first explosion, according to the report, even though Dehqani Zangeneh said the second missile hit the plane 25 seconds later.

"Right after the detonation sound, the three flight crew members inside the cockpit noticed the unusual situation and immediately began taking actions required to control the aircraft accordingly," according to the civil aviation organization report.

"The post-detonation sounds show that all the three crew members inside the cockpit had been controlling the situation without any indication of injury/damage to their health. ... As yet, there exists no voice or sign revealing the passenger cabin's conditions in the recorded data and audios."

The Transportation Safety Board of Canada confirmed Sunday that it had received the report, which chair Kathy Fox described as "consistent with information that TSB investigators received while attending the download of the recorders in France."

"The investigation is far from over," she added, "as there are still many key questions that need to be answered."

The TSB said it will continue to push for a "thorough, transparent and credible safety investigation" to determine the sequence of events leading up to the downing of Flight PS752 and why Iran didn't close its airspace to civilian planes on the night of Jan. 8.

The plane was shot down shortly after taking off from Tehran's main airport on the same night Iran launched a ballistic missile attack targeting U.S. soldiers in Iraq -- a response to the American drone strike that killed a prominent Iranian general, Qassem Soleimani, in Baghdad on Jan. 3.

Foreign Affairs Minister Francois-Philippe Champagne told The Canadian Press in an interview Sunday that he was still being briefed on the findings.

An association representing the families of those killed on board Flight PS752 dismissed Dehqani Zangeneh's statement, saying it raised more questions than answers, including why the Iranian anti-aircraft unit fired a second missile at the airliner.

"Our important questions regarding the reason for the delayed takeoff and the pilot's communications within that hour, which should have been included in the report of the black boxes, have also been left conspicuously unanswered," the Association of Families of Flight PS752 Victims said in a statement.

Many victims' families have dismissed from the start the Iranian government's claims about the circumstances surrounding the jetliner's downing, and called instead for an independent investigation to ensure those responsible are held to account.

They have also said that any talk about compensation must be preceded by uncovering the truth of what happened.

An Iranian report last month blamed a number of errors for what it suggested was an avoidable tragedy, starting with the surface-to-air missile battery that targeted the Boeing 737-800 having been relocated and not properly reoriented.

Those manning the missile battery also could not communicate with their command centre, the report said. They also misidentified the civilian flight as a threat and opened fire twice without getting approval from ranking officials.

The report did not say why the Iranian military moved the air-defence system, but noted the Ukrainian flight had done nothing out of the ordinary up until the missile launch, with its transponder and other data being broadcast.

This report by The Canadian Press was first published Aug. 23, 2020.

--with files from The Associated Press