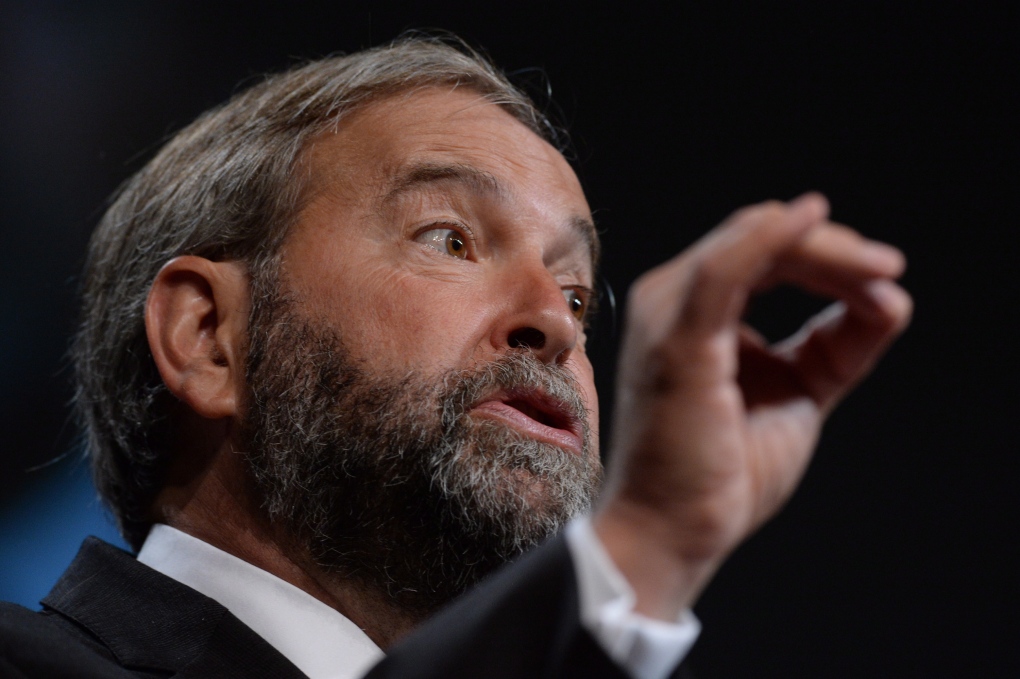 OTTAWA -- Tom Mulcair defended the use of marijuana as a matter of personal choice on Wednesday, recalling his own youth puffing on "oregano" even as the Canadian Medical Association officially warned against smoking pot.

In remarks on the sidelines of the annual CMA meeting, the NDP leader stopped short of echoing Justin Trudeau's call to legalize marijuana, saying there are still issues that need to be examined before that happens.

"The NDP for 40 years has believed that it makes no sense at all for a person to have a criminal record for possession or personal use of a small amount of marijuana," Mulcair said when asked why his party isn't backing Trudeau's stance.

"But what we are also saying is that there are a lot of complex issues, including supply, that have to be looked at in a lot more detailed fashion.... There is still a fair amount of hard work to be done to be able to get to solutions."

Mulcair didn't specifically raise any health concerns about weed, disputing a suggestion that it's a gateway drug. That's a "very 1960s argument" that has been widely debunked, Mulcair told a news conference.

But just upstairs at the Ottawa Convention Centre a few hours later, two-thirds of CMA delegates voted to formally oppose the smoking of any plant substance, including cannabis.

A spokesman for Mulcair said later Wednesday that the NDP leader has long emphasized the need to "minimize the negative health effects going forward after decriminalization."

George Smith added: "We hope that the CMA would play a significant role in this examination and we applaud their decision today to discourage inhaling of smoke, whether tobacco or marijuana."

Louis Hugo Francescutti, the outgoing head of the CMA, told delegates that smoking plants has a detrimental impact on the lungs' "natural cleaning and repair system" and can trap toxic chemicals in the lungs.

He pointed to a 2008 study by the American Chemical Society that found marijuana fumes are rife with just as many chemicals as tobacco smoke, but in greater concentrations.

Francescutti also said the motion could add some heft to the CMA's call for more research into medical marijuana.

Some doctors, however, worried that the anti-plant-smoking resolution had a prohibitionist tone.

The delegates also gave the green light to another resolution that urged a comprehensive regulatory standard for approving the use of medical marijuana at the end of a conference that saw weed take centre stage.

Chris Simpson, the CMA's new president, opined that pot could be more harmful than tobacco because weed-smokers inhale more deeply. But he reiterated the CMA's long-standing position, similar to Mulcair's, that marijuana should be decriminalized.

In Vancouver on Tuesday, Justice Minister Peter MacKay said the federal government is still assessing whether to allow police to ticket people caught with small amounts of marijuana instead of pursuing criminal charges.

Ahead of a meeting with law enforcement officials in Vancouver, MacKay said any change in legislation would have to happen within the next six months.

In his speech, Mulcair accused the Tories of unsuccessfully trying to recruit Canadian doctors in an ideological crusade against marijuana.

Three medical groups, including the CMA, recently turned down a request by Ottawa to participate in a campaign to raise awareness about the dangers of marijuana use to Canadian youth. They said the issue had become a "political football."

Trudeau called the proposed campaign a thinly veiled attack on his pro-legalization stance. Health Minister Rona Ambrose, who spoke at the conference earlier this week, scoffed at the Liberal leader's charge.

Mulcair stated the obvious on Tuesday -- public perceptions about marijuana are changing rapidly.

"Everything is moving in the same direction; even the Canadian Association of the Chiefs of Police is saying we should move away from the current system," he said after his speech, the first at the CMA conference by an Opposition leader.

And he recalled his own experiences with weed.

"When I was a student it was part of the culture, but what we were smoking back then was about as strong as oregano compared to what's on the market today," he said.

The fact that it's substantially stronger now, however, doesn't change his views, he added. "I think it's a matter of personal choice."