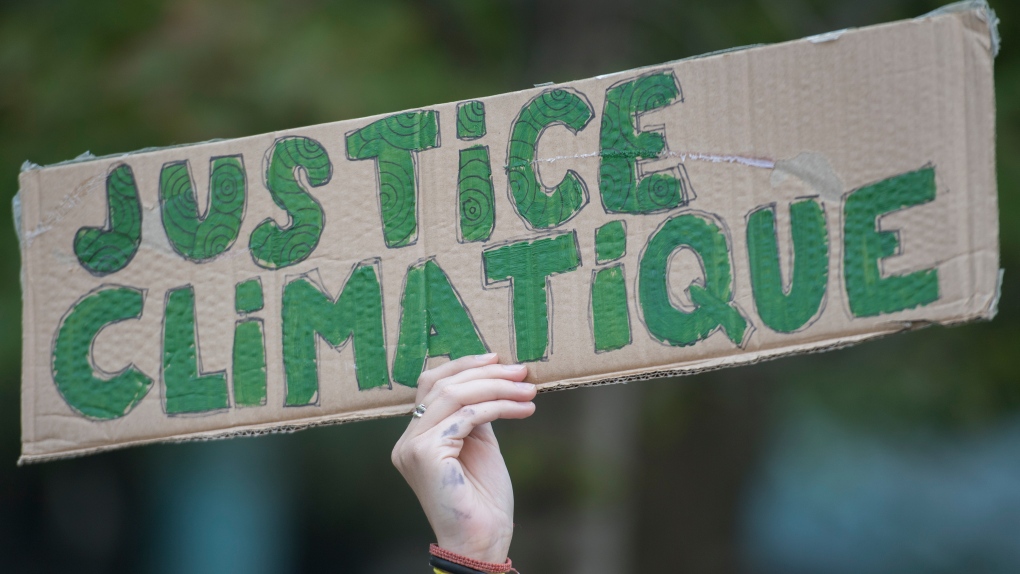 A person holds up a sign during a climate change protest in Montreal, Saturday, September 26, 2020. THE CANADIAN PRESS/Graham Hughes

OTTAWA -- An advocacy group alarmed by the pace of global warming is urging federal NDP and Green Party of Canada leaders to partner in the next general election in hopes of sending more climate-minded candidates to Ottawa.

Organizers with 350 Canada say each party on its own doesn't have the seats needed to elect enough MPs to push the country toward a stronger climate agenda.

It says the federal Liberals have failed to ensure greenhouse gas emissions fall at the speed scientists say is needed.

That's why the group is calling for the New Democrats and Greens to form a "climate emergency alliance" and pledge to do whatever it takes to address the issue.

Organizers say in ridings where one candidate has a good chance of winning, the party trailing in third or fourth place would throw its support behind the leading contender.

Based on its own modelling of past election results, the second choice of voters and climate polling, the group says an alliance could open up as many as 80 more seats for the parties.

"If Jagmeet Singh and Annamie Paul came together and set aside all the partisan reasons that they don't want to do this, they could form something that is historic and unprecedented," said Amara Possian, a campaigns director at 350 Canada.

"By doing that, they would shine a light on Trudeau's failure to meet the climate crisis."

The group's campaign comes as NDP members are set to meet at a virtual convention this weekend.

Among the policy resolutions pitched was a collaboration with the Greens for the next election in certain ridings on issues like social justice, climate and electoral reform.

"We are happy to work with Green MPs on these issues. We have in the past and will continue to do so," Laurel Collins, the NDP's environment and climate change critic, said in a statement.

"The Liberals have shown over the past five years that they aren't going to do what needs to be done. If Canadians want real climate action, they should not vote Liberal in the next election."

Possian says the idea of an NDP-Green alliance on climate resonates with some grassroots activists.

Both parties agree more than they disagree on social and climate policies, she said. The group also notes that left-leaning voters and young people tend to rank climate change as one of their top concerns.

"We could come out with a game-changing climate platform that would deliver the action that we need and appeal to millions of people across the country who are looking for a stronger climate plan," said Possian.

Regardless of what party leaders do, she said, Green and NDP candidates can still work together.

This report by The Canadian Press was first published April 7, 2021