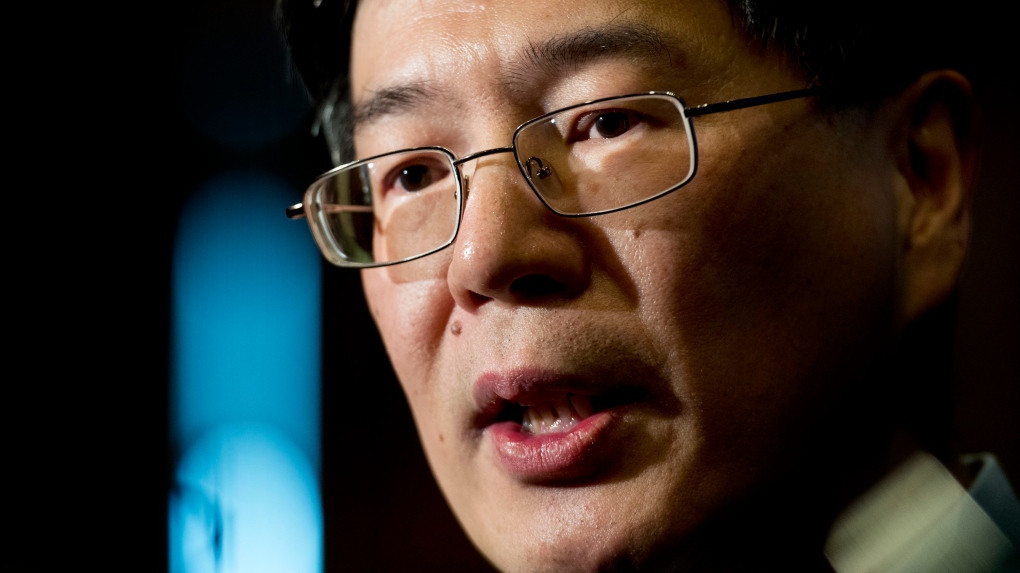 OTTAWA -- China's ambassador to Canada says that while the co-operation between Canada and China on the coronavirus has been "good," the overall relationship between the two countries remains tense for other reasons.

Reporters pressed Cong Peiwu on the status of the relationship at the CDA Institute's Ottawa Conference on Security and Defence on Wednesday, asking if tensions have thawed as a result of increased communication between the two countries amid the outbreak.

Cong seemed to shoot down the suggestion.

"You know the outstanding issue for the bilateral relationship," Cong told reporters, though he added that the co-operation in the fight against COVID-19 has been "appreciated" and is "good."

"The public health sector is always an important part of our relationship," he said.

Tensions between Canada and China plunged into a deep freeze following the arrest of Huawei chief financial officer Meng Wanzhou in December 2018. Canadian authorities arrested Meng in Vancouver after the United States requested her extradition.

Canada's arrest of the executive in Vancouver infuriated China, which subsequently arrested Canadians Michael Spavor and Michael Kovrig in what the Canadian government has described as retaliation, though China insists otherwise. China also briefly banned the import of Canadian beef and pork, blaming it on a banned animal feed additive they claim was found in a shipment of Canadian pork.

It appeared as though the tensions may have begun to thaw when communication ramped up between the two countries as a result of the coronavirus outbreak. Foreign Affairs Minister Francois-Philippe Champagne told CTV Question Period last month that China has been responsive to conversations about the outbreak.

However, the Chinese ambassador signalled to reporters on Wednesday that the health-related discussions are separate from what he referred to as the "outstanding issue for the bilateral relationship."

"But at the same time, we believe this kind of exchange and also the co-operation in terms of the fighting against the disease, of course, that's good," Cong said.

The ambassador also continued to deny the existence of Uighur concentration camps in the Xinjiang region.

"There's nothing like concentration camps in China, or particularly in the Xinjiang autonomous region," Cong said in response to the moderator's question about whether these camps hurt China's ability to use soft-power responses to international tensions.

Former detainees and their loved ones told The Associated Press that what the Chinese government is calling vocational training centres are actually a sort of prison, where they force detainees to accept the ruling Communist Party and make them renounce Islam. Detainees have also alleged they were subject to indoctrination and torture.

Further to that, an international consortium of journalists published leaked classified documents which revealed a deliberate strategy to lock of the ethnic minorities – regardless of whether any crime had been committed.

Still, Cong claimed the Chinese government struck up what he called "vocational training centres" in response to a spate of what he called "violent terrorist incidents" in the Xinjiang region.

"The purpose is to make sure those students there, they first got the chance to learn the laws and the regulation, and secondly they can master some basic skills so that they can get a chance to find jobs," he said.

When the moderator pointed out that multiple credible publications like the Washington Post and the New York Times have reported on the concentration camps, Cong said there is "a lot of fake news."

"Some of the Western medias can be misleading you know, so be careful," he said.

‘No arbitrary detention’ of detained Canadians

Speaking to reporters on Wednesday, Cong was also pressed on the issue of the two detained Canadians, Spavor and Kovrig.

He insisted their detentions were legitimate, but would not say when China will publicly present evidence to back up the spying charges against the two Canadians.

"There's no arbitrary detention of the two gentlemen you have mentioned," Cong said.

He said the "competent authorities in China" are handling the case "strictly according to law" and called for Chinese judicial sovereignty to be respected.

When a reporter asked when China will present the evidence to back up those charges, Cong would not provide any clear indication of timing.

"If you would like to have further detailed information, you could refer back to the competent authorities in China, because we are following them according to our procedure," Cong said.

As the two Canadians remain detained, reports of their rights being violated have been circulating. There are reports of lights being left on in their cells while they try to sleep and of Kovrig's reading glasses being taken away.