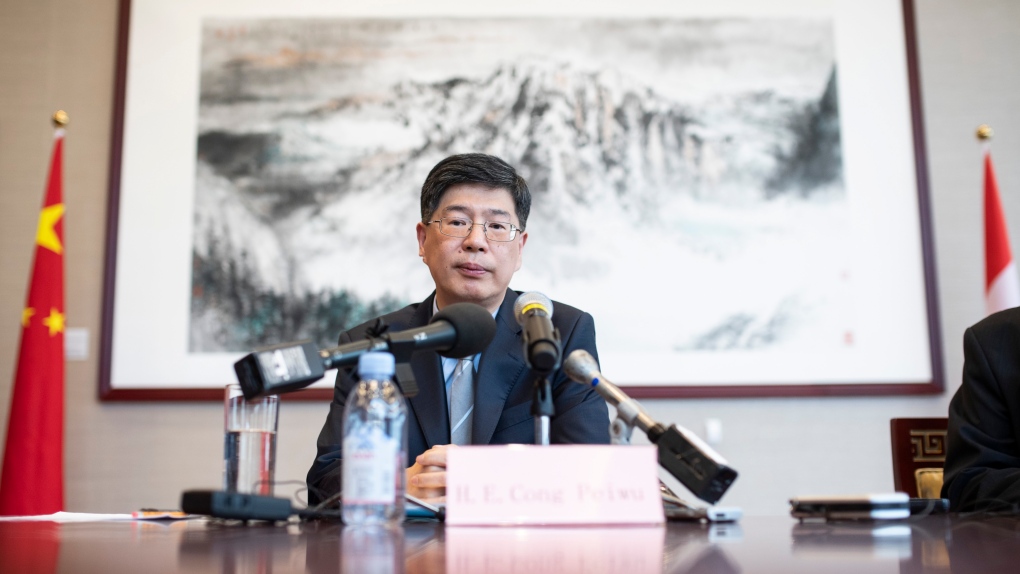 Ambassador of the People's Republic of China to Canada Cong Peiwu participates in a roundtable interview with journalists at the Embassy of China in Ottawa, on Friday, Nov. 22, 2019. THE CANADIAN PRESS/Justin Tang

OTTAWA -- Beijing has a new representative in Canada but his stern message to Ottawa remains the same as his predecessor's: release Huawei Technologies executive Meng Wanzhou, arrested in Vancouver nearly a year ago at the request of the United States.

In a roundtable interview Friday, Chinese ambassador Cong Peiwu also urged Canadians to speak out loudly against the "violent criminals" protesting for more freedom in Hong Kong, citing the risks to Canadian citizens and companies there.

"What happened in Hong Kong has nothing to do with democracy or human rights," said the 52-year-old Cong, who arrived in Ottawa two months ago.

Cong denounced U.S. legislation aimed at sanctioning Chinese and Hong Kong officials who abuse human rights. He cautioned Canada against any such action, suggesting it would cause "very bad damage" to the bilateral relationship "and that's not in the interest of Canada."

Relations between Ottawa and Beijing have been fractious since early last December, when Canadian authorities took Meng into custody over American allegations of violating sanctions on Iran. Her extradition case is before a Canadian court.

The developments are widely seen in Canada as retaliation for the detention of Meng.

Cong said Meng's arrest and pending extradition to the U.S. amount to arbitrary detention, leading to "the severe difficulties" Canada and China are experiencing.

The ambassador tried to play down any fears about allowing Huawei to help build Canada's next-generation 5G mobile networks.

Some security experts say Huawei's participation could give it access to a wide range of digital data gleaned from how, when and where Canadian customers use their electronic devices. In turn, Chinese security agencies would find that information highly interesting.

Cong dismissed the notion Huawei could compromise users' security by installing "back-door" channels in devices, calling it a "groundless accusation."

"So we do hope the Canadian side will provide a fair, just and non-discriminatory business environment for Chinese companies, including Huawei."

For its part, Huawei stresses it is not a state-controlled enterprise and that it would never spy on behalf of China or any other country.

Another point of contention is China's ban on imports of Canadian canola seed, over what it alleges is contamination. The dispute is now in the hands of the World Trade Organization.

Earlier this month, word came that a Chinese ban would be lifted on imports of Canadian pork and beef products, estimated to have cost farmers almost $100 million.

China suspended imports in June, saying its customs inspectors discovered residue from a restricted feed additive in a batch of Canadian pork products. A subsequent probe found a forged veterinary health certificate related to the batch, prompting an RCMP investigation.