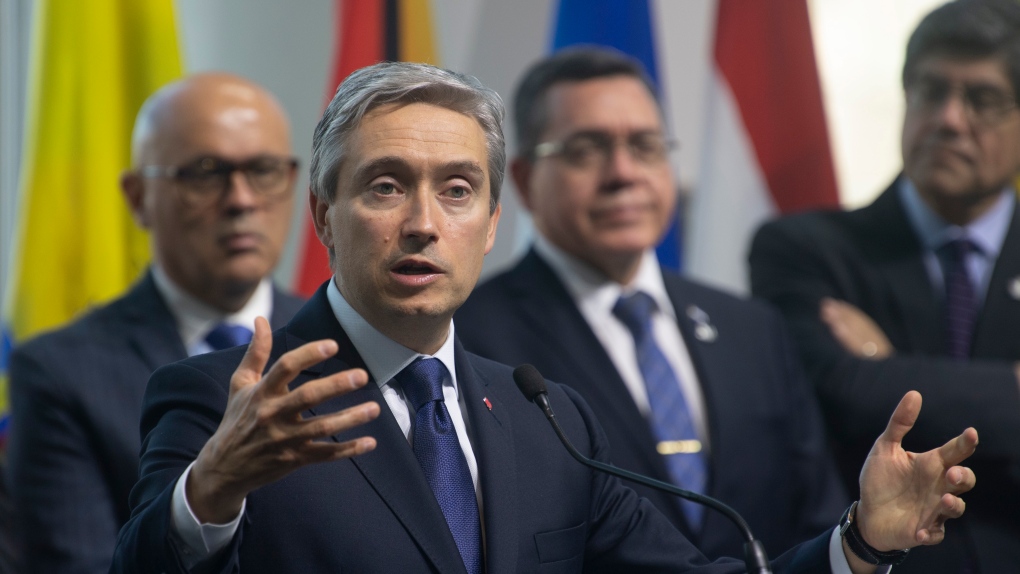 OTTAWA -- Iran is undermining international law by preventing the examination of the flight recorders from the Ukrainian jetliner it shot down last month, Foreign Affairs Minister Francois-Philippe Champagne said Friday.

While Iran has been co-operative in helping repatriate the remains of Canadian crash victims, the regime needs to do more to respond to international questions about the incident six weeks ago that killed all 176 people on board, including 57 Canadians, Champagne said.

In a major foreign policy speech, and while speaking to reporters afterwards, Champagne said he has been pushing the Iranian government to respect international civil aviation law and allow the black boxes from Ukraine International Airlines Flight 752 to be sent to France so their data can be properly downloaded and analyzed.

Champagne repeatedly said the time has come for Iran to comply with Annex 13 of the Convention on International Civil Aviation, and he said he's personally delivered that message to his Iranian counterpart as recently as last week in Germany.

"In Iran, we're told they still want to get the equipment or expertise. I'm saying, well after 30 days you haven't managed to, and since the appendix says 'without delay' I interpret the spirit of the text and the law to be without delay," he said. "So what I'm telling Iran is: let the French experts do it. France has offered to analyze the black boxes."

Champagne said he has asked the president of the Montreal-based International Civil Aviation Organization to not allow "that situation to continue because we're going against international law here."

Earlier, in his speech, Champagne singled out the challenges posed by Iran, as well as China, as examples of an increasingly volatile world -- one that Canada wants to confront with its allies by running for a seat on the United Nations Security Council.

Canada wants to use a seat on the council to help address the challenges posed by the "selective application" of international law, rising populism and trade protectionism, the erosion of human rights, and the shifting of political and economic power to Asia, he said in the address to the Montreal Council on Foreign Relations.

Champagne's top declared priorities include winning the freedom of Michael Kovrig and Michael Spavor from their arbitrary imprisonment by China and pushing Iran to release the black boxes it recovered.

"We are seeing the emergence of a multipolar world with new epicentres of influence and competition over ideas and models of governance," he said. "Around the world, human rights are increasingly under threat."

Canada's relations with China have deteriorated since December 2018, when the RCMP arrested Huawei high-tech executive Meng Wanzhou. Nine days later, China arrested Kovrig and Spavor in what is widely viewed as retaliation, and later blocked some Canadian agricultural exports.

In recent weeks, Canada and China have thanked each other for the open communication and co-operation since the outbreak of the novel coronavirus.

Even though Canada has been able to repatriate 550 Canadians since the outbreak with the help of Japanese and Chinese officials, Champagne played down the suggestion of newfound warmth between Ottawa and Beijing.

"It should not be inferred that Canada's relationship with China has returned to normal," he said in an English translation of the address given mainly in French.

The vexing challenges posed by China and Iran come at a time when Canada is campaigning for that seat on the UN Security Council, an opportunity Champagne said would demonstrate Canada's leadership in confronting the great challenges and crises of our time -- the rising threats to the world's multilateral institutions.

Despite a full slate of international crises to deal with since the start of the year, Champagne has stepped up his campaigning for the UN seat in travels across Africa, Europe and the Caribbean. The June vote will pit Canada against Norway and Ireland for two available seats for a two-year term that begins next year.

Canada will need to win the support of at least 128 countries in the secret ballot at the UN General Assembly. Champagne cited Canada's contributions to the Lima Group on the Venezuela crisis, its leadership of a dozen countries on an initiative to strengthen the World Trade Organization, its efforts to rid the world's oceans of plastic pollution and its leadership on championing media freedom.

"Indeed, the UN Security Council is still among the most important tables in the world where major decisions and discussions on peace and security are taking place," he said. "And it's a place where Canada can have both influence and relevance."