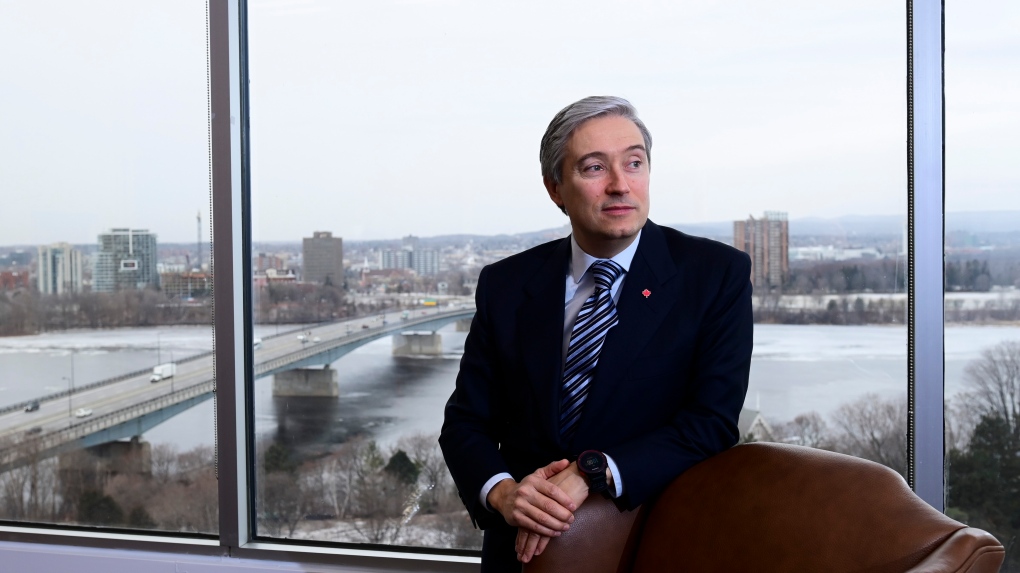 Minister of Foreign Affairs Francois-Philippe Champagne takes part in a year-end interview with The Canadian Press at Global Affairs Canada in Ottawa on Wednesday, Dec. 16, 2020. (THE CANADIAN PRESS/Sean Kilpatrick)

OTTAWA -- Foreign Affairs Minister Francois-Philippe Champagne is shooting back at China's criticism of Canada's efforts to build an international alliance to free Michael Kovrig and Michael Spavor from prison.

"I'll do what I think is in Canada's best interest, trust me," Champagne said in an interview with The Canadian Press this week.

"I'll take no lessons from anyone, and certainly not from China when it comes to defending and standing up for values and principles and defending Canadian interests and defending Michael Kovrig and Spavor."

Champagne has led Canadian efforts to create a coalition that includes dozens of countries pushing China to release the two men, whom they say are being arbitrarily and unjustly imprisoned.

Kovrig and Spavor were arrested Dec. 10, 2018 and eventually charged with violating China's national security, which Canada and its allies reject as trumped-up charges.

They say China is retaliating for the RCMP's arrest of Chinese high-tech executive Meng Wanzhou on an American extradition request to intercept her while travelling through Vancouver's airport, nine days before Kovrig and Spavor were apprehended.

China has repeatedly called for Meng's release and warned Canada against lobbying other countries for support in its quest to pressure Beijing to free the two Michaels.

Last week, China's ambassador to Canada, Cong Peiwu, told The Canadian Press that Canada acted as a "disgraceful" accomplice to the United States in arresting Meng, and that her prosecution was an attempt to undermine her company, Huawei Technologies.

"China's approach in the way it's been conducting itself is not improving its relations with any country around the world and indeed, is harming its own interests," Prime Minister Justin Trudeau said Friday, noting the "two Michaels" are about to spend their third Christmas in Chinese prisons

"It is incredibly frustrating to me that the Chinese government continues to not understand that Canada is a country that respects the rule of law, and will continue to -- that we are a country that rejects coercive diplomacy and arbitrary detention."

Trudeau gave no indication that the political logjam between China and Canada will be broken any time soon.

"I remain hopeful to get good news, an hour from now, a day from now a week from now, a month from now. We continue to work and be optimistic that we're going to be able to bring them home."

Champagne said he will continue his lobbying efforts, and he will keep pushing for full consular access to the two men, which was only partially restored in October after it was cut off in January because of Chinese concerns around COVID-19 in prisons.

Canada's ambassador to China, Dominic Barton, has since had two more virtual on-site visits with the two men via video but has still not been allowed in the same room as them.

Champagne said his impromptu face-to-face meeting in August with his Chinese counterpart, Wang Yi, was a pivotal step in eventually restoring some form of consular access so Canada could verify the well-being of the two men, exercising its diplomatic rights under the Vienna Convention.

"It's a step. Obviously, they should never be there in the first place. So, let's be clear with everyone."

Champagne was in Rome when he noticed in a media report that Wang was there too. He immediately sent a flurry of text messages. He spoke Italian to Italian officials. Eventually, the meeting was set, and it unfolded over two hours late one night.

"They know our position. I repeated it in no uncertain terms," said Champagne, who repeatedly characterized his discussion with Wang as "robust."

He said it was significant that the plight of Kovrig and Spavor was specifically mentioned in the final communique that the European Union released earlier this year after its summit with China. He said the world now views Kovrig and Spavor not as arbitrarily detained Canadians but as "two citizens of a liberal democracy" that are being detained.

Champagne suggested he's in no rush to formally release a new strategy on dealing with China as the Conservative opposition is pushing him to do, saying that any policy statement on China could easily become irrelevant because developments with China evolved at an unprecedented pace in 2020.

That has included its new national security law for Hong Kong, which Champagne and a chorus of others say is snuffing out democracy in the former British colony, and revelations about the imprisonment of more than one million ethnic Muslim Uighurs in re-education prison camps in China's Xinjiang province.

"Some of my colleagues said they had put out a kind of a strategy at the beginning of the year, and some say they're not even sure if it's still relevant 12 months after, six months after because it's a fast-evolving set of circumstances," said Champagne.

Champagne said the last two years have been "stolen" from Kovrig, Spavor, their families and loved ones, and that every day they remain behind bars is "one day too much."

This report by The Canadian Press was first published Dec. 18, 2020.