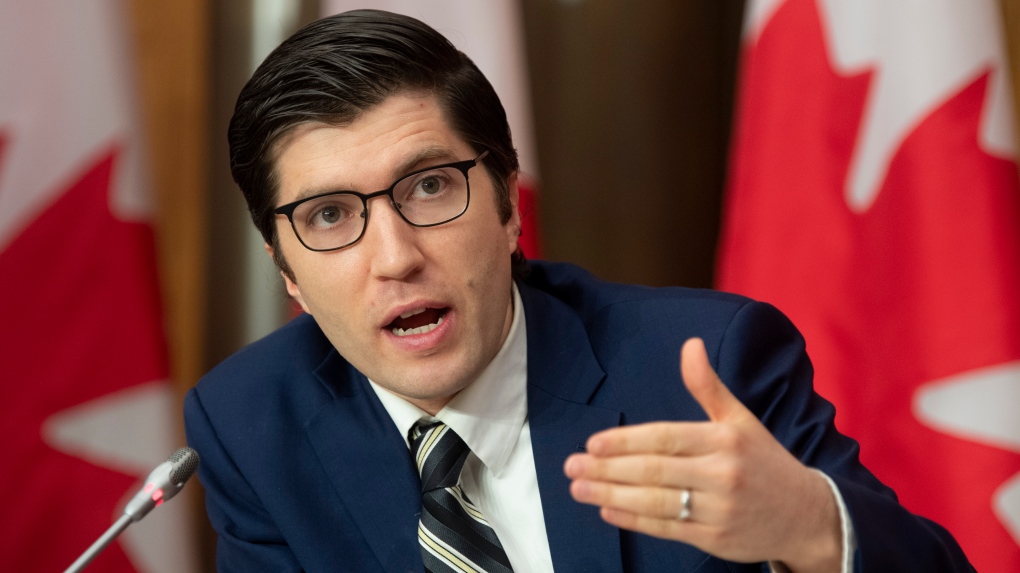 Conservative MP Garnett Genuis responds to a question during a news conference in Ottawa, Thursday November 26, 2020. THE CANADIAN PRESS/Adrian Wyld

OTTAWA -- After burying his wife after the passenger jet she was aboard was shot down by the Iranian military, Javad Soleimani returned to Canada and began speaking out about the tragedy of Ukrainian International Airlines Flight PS752.

Soleimani's wife, fellow Edmonton PhD student Elnaz Nabiy, was among the 176 people -- including 55 Canadian citizens and 30 permanent residents -- killed Jan. 8 when the Iranian Revolutionary Guard Corps fired two missiles at the Boeing jet shortly after it took off from Tehran's airport.

Then the Guard came calling on him, Soleimani said Thursday, after he assumed -- falsely -- that he was safe back in Canada.

"Someone, probably a permanent resident, or perhaps a citizen of Canada, kept sending me messages telling me that IRGC is able to do anything in Canada and that I better be careful about myself," Soleimani said.

He's reported incidents like that to the Canadian government, which has appointed former public safety minister Ralph Goodale to deal with the loved ones of PS752 victims, but not enough has been done to assuage the growing fears of Iranian Canadians, said Soleimani.

"One day Canada was the safest place for all of us to live, but currently it's not at all safe."

Soleimani joined three other people via video link to a Parliament Hill press conference on Thursday, where they gave harrowing accounts of harassment by foreign agents operating on Canadian soil.

They detailed how they had been victims of threats and intimidation by Iranian, Chinese and Russian foreign agents, and they said Canadian domestic police forces have proven ill-equipped to deal with their concerns.

They were supporting a private member's bill from Conservative MP Garnett Genuis calling on the federal government to take stronger action against foreign interference, including creating a new single point of contact to report it.

Genuis was following up on his party's successful motion in the House of Commons last week to call on the Liberal government to take a harder line against national security threats from China.

"If a Canadian faces foreign-backed threats and intimidation, who do they go to? Many have reported getting the runaround," said the Alberta MP, who also serves on the special Commons committee on Canada-China relations.

Soleimani was joined by members of Canada's Tibetan and Uighur communities, and a Canadian filmmaker and journalist who specializes in Russia, to put a human face on the growing accounts of foreign intimidation in Canada.

In March, the National Security and Intelligence Committee of Parliamentarians singled out China and Russia for their "significant and sustained" foreign interference in Canadian affairs, for trying to exploit the openness of Canadian society and for penetrating key institutions.

The reconstituted Canada-China Commons committee intensified its examination of the topic this week, and was told by John McCallum, a former ambassador to China, that he rejected numerous visa applications from dubious Chinese travellers who had been flagged by security agencies.

Chemi Lhamo, a University of Toronto student, recalled the harassment she endured because of her Tibetan heritage when she ran for student government in 2019. Her mobile phone exploded with 16,000 threatening comments on social media, including "rape threats, death threats, not just against me, but my whole family."

One said, "The blade that will go through you is made in China." Another said. "your mom is dead." She had to call her mother "just to check in on her, without frightening her."

Lhamo said she was followed by Chinese students on campus who took photos of her and those she spoke with. She got nowhere, she said, when she tried to get help.

"I jumped from Toronto police, to my campus police, to RCMP, to dealing with CSIS, getting different levels of security or heads of security across the country," she said.

"Ultimately, I still do not have a physical piece of paper that says, here's a report that we did, or here is the information on the people that have been threatening to kill you on Canadian soil."

Marcus Kolga, a filmmaker and freelance journalist who has devoted a critical eye to Russia, said he has been getting the "runaround" from his local police, the RCMP, and CSIS after being threatened multiple times by Kremlin-backed trolls between 2008 and 2019.

Kolga, who is a member of the Macdonald-Laurier Institute think-tank, said he eventually received a message from the same Moscow IP address he'd heard from in the past "asking whether I was dead yet."

Eventually, he said, a York Region police detective "took a meaningful interest in the case" and tracked down the malicious messenger.

Rukiye Turdush, a Canadian-Uighur activist, said complaining to any Canadian authorities about Chinese harassment is complicated by the fact that many people like her have relatives back home in China's Xinjiang province. Chinese police make videos of their visits to play for their Canadian relatives.