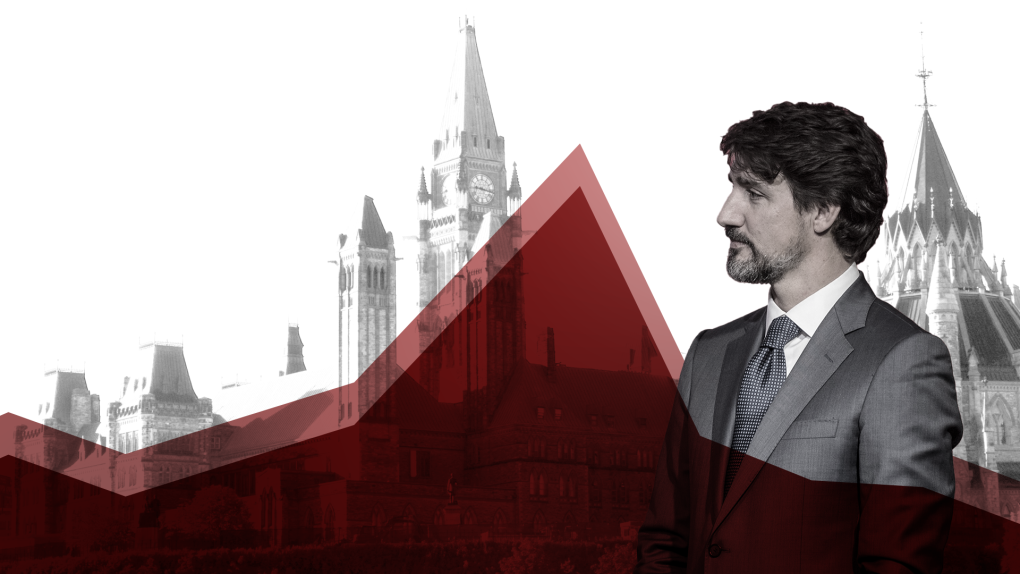 When asked how they would describe the performance of the current federal government, 25 per cent of Canadians said “very poor” and 19 per cent said “somewhat poor”. (THE CANADIAN PRESS/Tijana Martin/Paul Chiasson, photo illustration by Jesse Tahirali)

TORONTO -- Canadians have been increasingly critical of the federal government’s performance since 2015, with an all-time low in the number who think the feds are doing a good job, according to a Nanos Research study that began tracking the “Mood of Canada” 13 years ago.

When asked, at the end of 2019, how they would describe the performance of the current federal government led by Prime Minister Justin Trudeau, 25 per cent of Canadians said “very poor” and 19 per cent said “somewhat poor”.

Nanos Research conducted the 13-year tracking study in conjunction with the Institute for Research on Public Policy. Pollster Nik Nanos said the latest approval rating numbers show the “significant amount of hope for the Liberals at the beginning of their mandate” has since been cut in half.

“Back in 2015, when the Liberals were first elected, about 60 per cent of Canadians thought that the federal Liberal government, led by Prime Minister Justin Trudeau, was doing a very good or good job,” said Nanos on CTV News’ Trend Line podcast.

“Fast forward, and now it has dropped to 27 per cent.”

The tracking study also shows a growing number of Canadians who think the country’s moving in the wrong direction. At the end of former Conservative prime minister Stephen Harper’s mandate in 2014, just 37 per cent of Canadians had a positive view of where we were headed. That number soared to 63 per cent after Trudeau’s Liberals were elected to a majority in 2015. But it has since dropped to 41 per cent.

When it comes to how Canadians perceive our global reputation, the numbers don’t get any better for the Liberal government.  In the Nanos study, the first three years of the Trudeau mandate were stronger than any of the eight years tracked under Harper. Trudeau pledged to get Canada back on the UN Security Council, for instance, and to boost our foreign policy and improve our international reputation.

But, with only 22 per cent of Canadians now having a positive view of how we may look to the rest of the world, we’re at the lowest point since 2013.

“This is what’s interesting about this. The government was able to make headway on things like the USMCA, and that being of critical importance to Canadians,” said Nanos. “But it just seems that … Justin Trudeau, whenever he's out representing Canada around the world, it just seems that there's always some sort of diversion from, what I'll say, his core mission,  [that] undermines his ability to have a significant impact.”

The tracking study numbers don’t include the period in January after Iran admitted to the downing of a Ukrainian airliner, which killed 176 people, including 57 Canadians. Trudeau’s response to the tragedy and condemnation of the Iranian missile strikes was widely praised.

Nanos conducted an RDD dual frame (land and cell lines) hybrid telephone and online random survey of 1,010 Canadians, 18 years of age or older, between December 22 and 29 , 2019 as part of an omnibus survey. Participants were randomly recruited by telephone using live agents and administered a survey online. The results were statistically checked and weighted by age and gender using the latest Census information and the sample is geographically stratified to be representative of Canada.

The margin of error for a random survey of 1,010 Canadians is 3.1 percentage points, 19 times out of 20. This study is a joint initiative between Nanos Research and the Institute for Research on Public Policy.