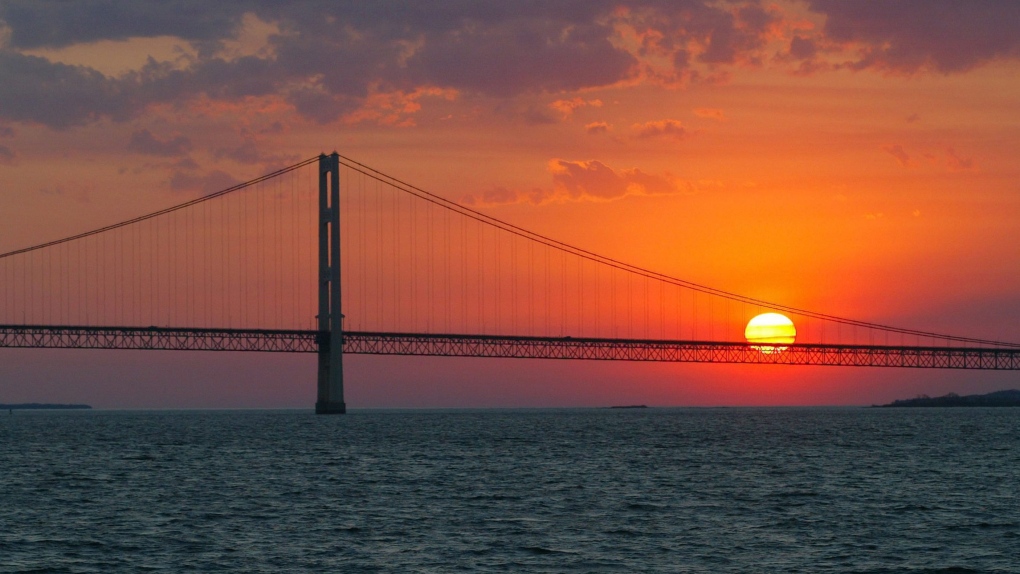 The sun sets over the Mackinac Bridge, the dividing line between Lake Michigan and Lake Huron, on May 31, 2002. (Al Goldis/AP Photo)

A number of Canadian mayors are sounding alarm bells over proposed budget cuts in the United States that would gut programs designed to help protect the Great Lakes.

Budget proposals drafted by the administration of U.S. President Donald Trump include slashing funding for the Environmental Protection Agency by 25 per cent.

The potential cuts would see the $300-million budget for the Great Lakes Restoration Initiative decimated by 97 per cent.

The project, which has been combating invasive species, cleaning up pollution and otherwise preserving the lakes since 2010 -- would receive just $10 million in funding in 2017.

Mayors in Canadian communities located along the Great Lakes say the funding cuts would be "devastating" and have long-lasting impacts.

They say lack of American action on lakes preservation projects would almost certainly be felt in Canada.

John Paterson, mayor of the southwestern Ontario town of Leamington, said the Restoration Initiative was an American-run program targeting only projects originating south of the U.S.-Canadian border.

He said he does not know how much Canadian governments have spent on lake preservation projects, but added that even an equivalent amount spent here would not mitigate the effects of neglect in the U.S.

"It would be like pushing a boulder up a hill if it was just the Canadians doing this," Paterson said in a telephone interview. "The Americans are always clear to state that the majority of the pollution and the problems that are in the Great Lakes are coming from specific areas in the U.S."

Paterson said it's impossible to estimate where the impact of the proposed budget cuts would be most evident, since the drastic reduction would mean that all programs planned for the coming years would have to be severely scaled back or eliminated altogether.

Randy Hope, mayor of Chatham-Kent, Ont., along the north shore of Lake Erie, said much of this work has gotten underway, along with numerous local efforts to improve the Great Lakes ecosystem around individual communities.

He said the Great Lakes and St. Lawrence Cities Initiative, a coalition of 127 communities across the U.S., Ontario and Quebec, has helped raise awareness of the need to protect the world's largest system of fresh water.

But the potential cuts to American funding risk not only undoing that work but eroding people's motivation to continue in their preservation efforts.

"People are being more proactive around it, and now all of a sudden you're just going to say, 'Thank you for all that work, now we're going to yank the carpet out from underneath your feet....we'll just see what happens,"' Hope said. "It's like rolling the dice with something that's so essential to us all as water."

Hope said he's particularly concerned about future pollutants, since his municipality is home to a significant drainage network.

Impacts to tourism and the local commercial freshwater fishery would also be significant, he added, particularly if aggressive species such as the Asian carp are allowed to proliferate the Great Lakes system.

It's a concern shared by Sandra Cooper, mayor of the Georgian Bay city of Collingwood, Ont.

Cooper said her community is already struggling with the invasion of sea lamprey, blood-sucking predators that have laid waste to native fish populations over the years.

If the voracious Asian carp are allowed to enter the system, Cooper said she fears the effects on local economy and recreation could be devastating.

"We're hoping to have a better barrier in the Chicago area to ensure that Asian carp do not make their way up into the Great Lakes," Cooper said, adding proposed cuts would almost certainly quosh that hope.

Paterson said he holds out hope that the cuts may not go through, adding the current budget is still only at the draft stage.

"I'm hoping between all the groups that are out there trying to protect the Great Lakes, we're able to convince the administration that any kind of cuts like that would be extremely wrong-headed."