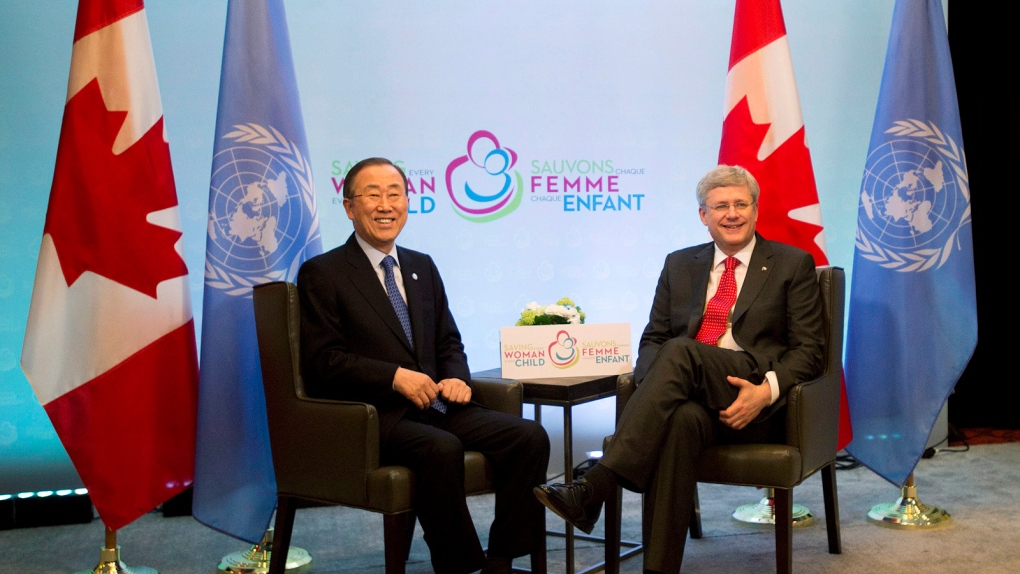 Stephen Harper, right, sits with UN Secretary General Ban Ki-moon as they attend the Maternal, Newborn and Child Health Summit in Toronto, on Thursday, May 29, 2014. (THE CANADIAN PRESS/Nathan Denette)

OTTAWA -- Canada ranked in the lower half of the pack in a world survey of foreign aid spending released Wednesday.

The annual ranking by the Paris-based Organization for Economic Co-operation and Development said Canada's aid spending dropped to 0.24 per cent of GDP in 2014, down from 0.27 per cent the previous year.

That's well below the United Nations target of 0.7 per cent of GDP, a goal that Secretary General Ban Ki-moon urged all OECD countries to meet when he shared a podium with Prime Minister Stephen Harper last year in Toronto.

The OECD average was 0.29 per cent of GDP with 13 countries increasing their development assistance spending, while 15, including Canada, showed a decline.

The Harper government imposed a five-year freeze on foreign aid to 2015 in order to fight the deficit and aid agencies hope there will be some new spending in the April 21 federal budget.

Louis Longchamps also said Canada is a world leader on improving maternal newborn and child health in the developing world.

Last year, Harper committed $3.5 billion over five years to 2020 to his signature aid initiative, which aims to reduce deaths among mothers and newborns in the developing world.

Julie Delahanty, Oxfam Canada executive director, said the initiative is worthy, but with overall aid numbers falling, it raises questions about what is being cut in other areas.

"The entire international development community has been asking and is consistently asking them to make good on the commitment," said Delahanty.

Stephen Brown, a University of Ottawa development specialist, said aid spending has not been this low since 1996. Countries with economies weaker than Canada's, including the U.K., are putting the country to shame, he said.

"Canadian claims to leadership in international development are contradicted by our relative stinginess," said Brown. "We lack credibility on the international stage when we are unwilling to back up our words with actual cash."

Overall, the OECD reported that the aid spending by its 28 member countries remained relative stable at $135.2 billion U.S., down 0.5 per cent from the previous year. It pegged Canada's annual contribution at $4.2 billion U.S.

Despite that overall relative stability, the amount of aid flowing to the poorest of countries continued to fall, the OECD said.

"Our challenge as we finalize post-2015 development goals this year will be to find ways to get more of this aid to the countries that need it most and to ensure we are getting as much as we can out of every dollar spent," OECD Secretary General Angel Gurria said in a statement.