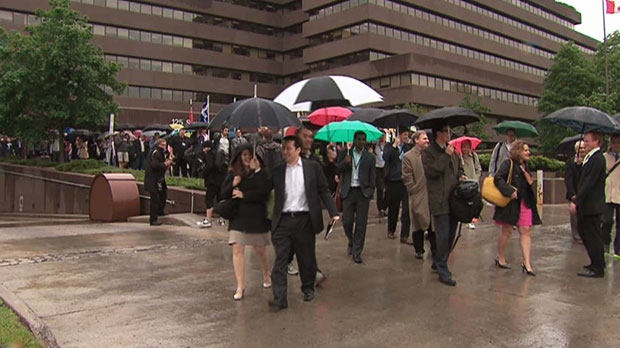 OTTAWA -- Canada's striking foreign-service officers have escalated their job action to 15 major embassies after an attempt to seek binding arbitration with the federal government broke down Friday.

The Professional Association of Foreign Service Officers accused Treasury Board President Tony Clement of negotiating in bad faith for insisting on a series of preconditions before agreeing to binding arbitration.

The union said Friday it will withdraw services at the 15 largest visa-processing centres in Canadian foreign missions, up from the three it had previously been targeting.

In addition to Beijing, Mexico City and New Delhi, the striking officers say they will also take aim at London, Paris, Abu Dhabi and Shanghai, among others.

The union wants wage parity with counterparts in other federal departments who the union says make as much as $14,000 more for doing similar work.

But Clement, who blamed the union for scuttling the binding arbitration option, said it was making unreasonable comparisons between substantively different jobs in the public service.

Friday's developments escalated the war of words between the small but vocal union and the outspoken Clement and set the stage for a job action that could last into the fall.

"PAFSO can only conclude that the government is behaving prejudicially toward the foreign service and is therefore negotiating in bad faith. This should be of serious concern to all Canadians," union president Tim Edwards said in a statement.

Said Clement: "The Canadian public is deeply concerned by PAFSO's willingness to disrupt international business, including tourism, during our busy spring and summer seasons."

The job action has hurt tourism and the number of foreign students coming to Canada to study in the fall because of backlogs in processing visa applications. Tourism groups have estimated that the strike could cost the industry $280 million this summer.

The union has said that visa processing dropped 65 per cent in June at the three major processing centres targeted so far by the strike.