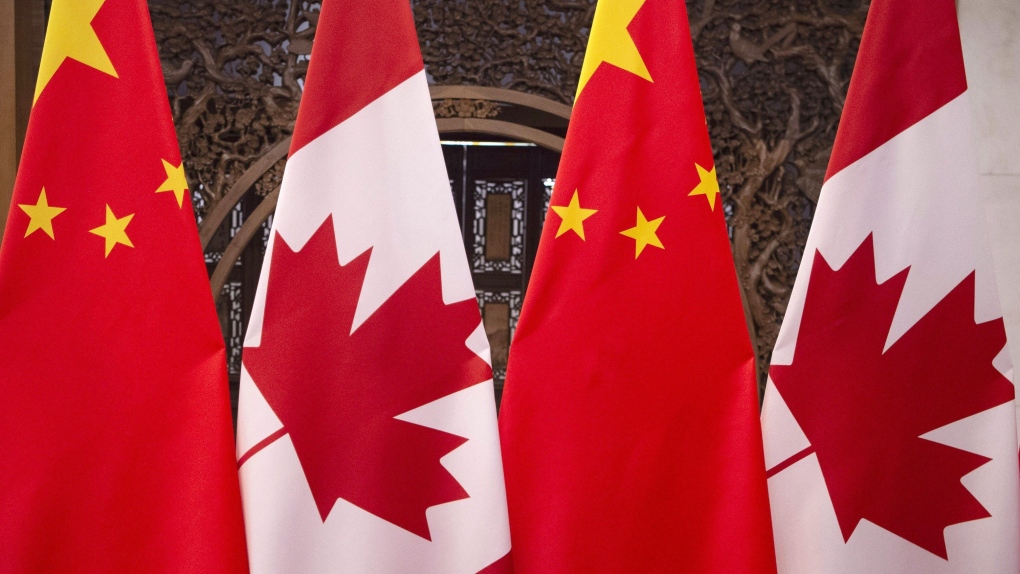 This Dec. 5, 2017, photo shows flags of Canada and China prior to a meeting of Canadian Prime Minister Justin Trudeau and Chinese President Xi Jinping at the Diaoyutai State Guesthouse in Beijing. THE CANADIAN PRESS/AP, Fred Dufour, Pool Photo

TORONTO -- In an update to travel advice for Canadians visiting China, the government has added more detail regarding the Xinjiang region, warning that Canadians with ethnic ties to the region could be “at risk of arbitrary detention.”

The official travel advice page for China on the government’s website was given a “thorough review and update of the entire travel advice content” on Sunday, the webpage stated.

Some of the changes are relatively minor, including rewording the requirements to take a COVID-19 test to enter China from a “PCR test” to “nucleic acid test”.

More notable were changes related specifically to the Xinjiang region.

Previous advice regarding the Xinjiang Uyghur Autonomous Region noted that it was “normal to see armed police,” that authorities were “increasingly detaining ethnic minorities in the region,” and that “family members of Canadian citizens with Chinese citizenship have been detained.”

But the new wording is more specific, describing reported internment camps and outlining that Canadians with ethnic ties to the region may be in danger of being detained if they travel there.

“Chinese authorities are increasingly detaining ethnic and Muslim minorities in the region without due process. There are reports of extrajudicial internment and forced labour camps. Family members of Canadian citizens with Chinese citizenship have been detained. You may be at risk of arbitrary detention if you have familial or ethnic ties to the Xinjiang Uyghur Autonomous Region.”

The page notes, as it did before the update, that “accurate information is hard to obtain” on the situation in the region.

There have been numerous reports by journalists, international human rights organizations and those who claim to have survived these “re-education camps” in China alleging human rights violations, forced labour, extended detainment and even torture at facilities for Uyghurs in China.

In February, MPs in Ottawa passed a motion declaring China’s treatment of the Uyghur Muslims a genocide, although Prime Minister Justin Trudeau and most of his cabinet did not participate in the vote.

In March, China responded to sanctions against their regime issued by Canada, the U.S., U.K. and the EU by pointing to those countries’ record on human rights, noting violations such as Canada’s treatment of Indigenous people through the residential school system, which was declared cultural genocide in 2015 by the Truth and Reconciliation Commission.

In Sunday’s update to Canada’s travel advice regarding China, several other sections also included changes that referenced the Xinjiang region.

A new section entitled “Journalism and research” outlined the “considerable restrictions” that journalists and other media workers may face in China, and advised travellers that they “should be particularly vigilant if researching or reporting on subjects critical of or sensitive to the government and in areas such as Tibet or Xinjiang.”

The section on “Demonstrations” is also longer than before, and notes that travellers who participate in “or are witness to” a demonstration in China may be “subject to scrutiny and severe legal action.

“Foreign journalists have also been intimidated and detained for reporting on demonstrations,” the page stated. “You should be particularly vigilant in the Xinjiang Uyghur Autonomous Region and the Tibet Autonomous Region.”

Another new addition states that travellers should not “film or take pictures of demonstrations.”

CTVNews.ca has reached out to Global Affairs for comment on what spurred the changes to the travel advice.

It’s important to note that the global advisory regarding travel during the pandemic has not changed — Canadians are all still advised to avoid all non-essential travel outside of Canada.

Canada’s advice for travel to China that specifically relates to the virus has been changed to note that “most regions are currently designated as low-risk by the government,” but that “concern over imported cases of COVID-19 in China remains high.”

Some of the other new changes to the travel advice page for China include a new section warning of regions prone to landslides; a new section explaining that commercial surrogacy is illegal in China and advising against entering the country purely to commission a surrogate; new phrasing regarding the quarantine rules; and the removal of a section discussing the risk of terrorism in the country, which had previously specified that Xinjiang had a higher risk of attacks.