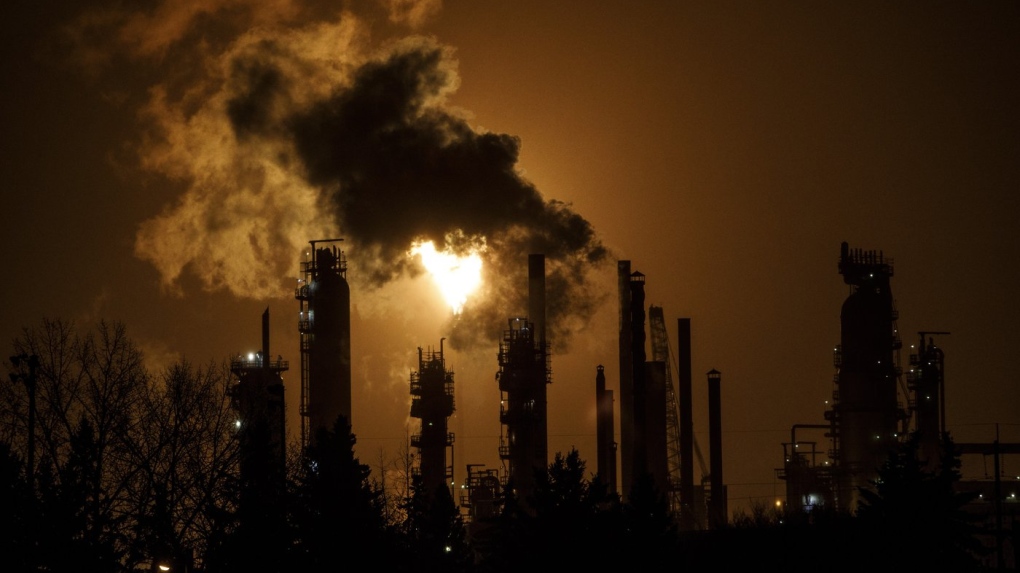 A flare stack lights the sky from the Imperial Oil refinery in Edmonton Alta, Dec. 28, 2018. THE CANADIAN PRESS/Jason Franson
OTTAWA -

With weeks until an end-of-year deadline it agreed to last year, Canada has announced that it will end new direct subsidies for fossil fuel investments and projects abroad — including those owned by Canadian companies.

The policy released Thursday afternoon applies to the extraction, production, transportation, refining and marketing of crude oil, natural gas or thermal coal, as well as power generation projects that do not use technologies such as carbon capture to significantly reduce emissions.

The rules, which take effect Jan. 1, will apply to direct funding from federal departments, agencies and Crown corporations.

Advocates had feared that Canada would opt for a narrower definition of "international" that would nonetheless allow support for Canadian companies abroad, which climate-change organization Environmental Defence estimates makes up about 78 per cent of Canada's international support for such projects.

But the policy defines "international" as "operations outside of Canada's jurisdiction in the fossil fuel energy sector regardless of owner domicile." This means that the federal government is barring itself from funding even fossil fuel projects wholly owned by Canadian companies.

"It's a very strong policy," said Julia Levin, Environmental Defence's national climate program manager. "It's very encouraging that the government has obviously listened to the experts and come up with a broad definition."

Ottawa is making the move weeks shy of a deadline it committed to, along with 38 other countries, in November 2021 at an international climate summit in Glasgow.

Out of high-income signatories, the United Kingdom, France, Finland, Sweden and European Investment Bank have already delivered policies hailed by international advocacy groups as meeting the high bar of the Glasgow statement. While the United States government has introduced policies to address the statement, it has released few details about how those policies are being implemented.

Levin said that Canada is showing leadership. "We're joining the group of first movers who are aligning international public spending with the climate commitments," she said.

Advocacy groups praised the policy, with organizations including the International Institute for Sustainable Development, the Center for International Environmental Law, Climate Action Network, Amnesty International Canada and others calling it an important step forward.

"Oil and gas is usually the elephant in the room in Canadian climate policy," Claire O'Manique, a public finance analyst at Oil Change International, said in a statement. "Today's guidance is a notable break from this norm."

The policy is not without loopholes. An international project could be supported for reasons of national security or humanitarian and emergency response, and a government could decide to take a broad definition of either.

But even under such circumstances, the project would need to abide by criteria including compliance with the goals of the Paris Agreement and proof that it will not "delay or diminish the transition to renewables." It would also have to be coherent with the goal to keep global temperature levels no higher than 1.5 C above pre-industrial levels.

A narrow carveout for natural gas power generation includes the additional criteria that there be no viable renewable alternative to the project and that it is replacing a higher-emitting fuel source.

The government defines the criteria around these exceptions as "strict," and Levin agreed that they are robust. "If these conditions are implemented with rigour and integrity, it really rules out any future fossil financing for natural gas," she said.

Thursday's announcement does not cover domestic projects and, Natural Resources Canada said in a statement, does not "pre-determine the government of Canada's future domestic framework on fossil-fuel subsidies."

The department says Ottawa intends to eliminate "inefficient" domestic fossil fuel subsidies and additional "significant" subsidies domestically by next year, but details are few and far between.

"I was hoping with the release of this policy, they would outline the next steps. I was disappointed that that wasn’t there," Levin said. "Projects in Canada are just as destructive as projects abroad. But this policy sets us up well for a strong domestic financing policy and I look forward to seeing the next steps in the immediate future."

Reacting to the policy Thursday evening, the federal NDP noted that the elimination of international public financing for fossil fuel projects was part of its confidence-and-supply agreement with the Liberals, in which the party agreed to support the minority government in key votes until 2025.

"This wouldn't have happened if the NDP weren't at the table pushing for a better climate plan for Canadians. But the Liberals are still giving Canadians’ money to the ultra-rich CEOs who run massive, profitable oil and gas companies in Canada," environment critic Laurel Collins said in a statement.

Collins said the policy is "too little, too late" and is calling on Ottawa to end all fossil fuel subsidies, period, including at home.

This report by The Canadian Press was first published Dec. 8, 2022.

Thinly stretched rescue teams worked through the night in Turkiye and Syria, pulling more bodies from the rubble of thousands of buildings toppled by a catastrophic earthquake. The death toll rose Wednesday to more than 9,500, making the quake the deadliest in more than a decade.

Federal Health Minister Jean-Yves Duclos will ask the provinces today whether or not they intend to accept the new health-care funding deal tabled by the prime minister.